If Trump has his way, this major federal agency is on the way out 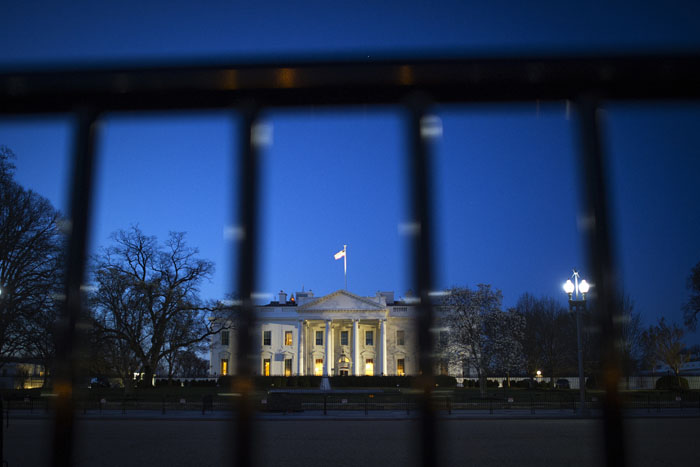 The White House is seen through a security fence, before sunrise on March 23. Cliff Owen/Associated Press

By Lisa Rein and Damien Paletta

WASHINGTON — The White House is moving to do what no president has accomplished since the end of World War II: eliminate a major federal agency.

If the Trump administration succeeds at dismantling the Office of Personnel Management, the closure could be a blueprint for shuttering other departments as it tries to shrink government.

The agency would be pulled apart and its functions divided among three other departments. An executive order directing parts of the transition by the fall is in the final stages of review, administration officials said, with an announcement by President Donald Trump likely by summer. OPM employees were briefed at a meeting in March.

For Trump, the breakup of the 5,565-employee federal personnel agency would offer a jolt of bureaucratic defibrillation to a slow-to-change workforce that the president and his top aides have targeted as a symptom of a sluggish, inefficient government.

The experiment will be closely watched not just on Capitol Hill but also by other agencies that could be next.

“It’s a big, exemplary step,” Margaret Weichert, deputy director for management at the Office of Management and Budget and acting OPM director, said in an interview. She characterized the agency created to oversee the civil service in 1978 as “fundamentally not set up for success, structurally.”

For Democrats and their allies in the labor movement, the effort to abolish the agency and redistribute its functions is a power play in defiance of Congress.

“Does anyone really think that if tomorrow the president said, ‘I’m dismantling DOD, and I think Ben Carson over at HUD can handle procurement and Betsy DeVos over at Education can handle the Army,’ that it would fly through?” asked Rep. Gerald Connolly, D-Va., chairman of a House Oversight Committee panel on government operations.

He has sent Weichert a lengthy request for details of the plan and is scheduling a hearing this spring “so you can make your case.”

Watchers of the federal government say they cannot remember a stand-alone department of OPM’s scope being dismantled since the World War II era. The Works Progress Administration, a New Deal agency that carried out public works projects, was dissolved in 1943. Congress abolished the Community Services Administration in 1981 and folded its functions into the Department of Health and Human Services, a closure faulted by congressional auditors as poorly handled. OPM, with a $2.1 billion annual budget, is bigger and more multifaceted.

Some former agencies, such as the Home Owners’ Loan Corp., which was prominent in the 1930s, once were large but shrank substantially before being eliminated.

“We’re very good at creating new entities,” said John Palguta, a retired career executive with the Merit Systems Protection Board, “but we haven’t abolished very much. I haven’t seen this kind of wholesale dismantlement of an independent, executive branch agency.”

It’s not easy to wipe out a federal department, especially one that serves 2.1 million employees across the government. The White House is short on details even as it prepares to move employees out of OPM’s headquarters in downtown Washington. Officials were not able to estimate the short- or long-term savings of the closure.

The White House is attempting to dismantle the agency in several stages, with some steps beginning now and other changes delayed pending congressional approval.

But by starting the process, the administration hopes to claim a win on a major government reorganization plan that has languished without buy-in from Congress.

The plan envisions a smaller, more consolidated government in line with the president’s campaign promise to “cut so much your head will spin.” Wiping out the federal personnel agency could be Exhibit A as Trump’s re-election campaign assembles a list of victories to take to voters, from deregulation and tax cuts to trade tariffs.

Weichert acknowledged that the administration would need Congress to approve the transfer of two of OPM’s core functions, the employee retirement and health care systems, and plans to ask lawmakers to introduce legislation in coming weeks.

The White House is taking steps now to parcel out many of the other responsibilities by the fall. The agency’s massive background investigation operation will migrate first to the Defense Department. The General Services Administration, the federal real estate agency, will absorb OPM’s human resources role, including training, pay and hiring, workforce planning, and the inspector general’s office.

The Office of Management and Budget would take over high-level policies governing federal employees, a plan that advocates and unions are decrying as a backdoor ploy to politicize the civil service by installing political appointees close to the White House.

The administration is asking Congress for $50 million in fiscal 2020 to carry out the reshuffling. Weichert said the administration does not intend to lay off anyone but instead will shrink the workforce through retirements and unfilled vacancies.

The mandate to manage a merit-based civil service goes back to the 1883 Pendleton Act, a law designed to end the “spoils system” of rewarding political supporters with government jobs. Federal appointments had to be based on skills and qualifications.

Congress created OPM out of the Civil Service Commission in 1978, the last time lawmakers voted to establish hiring, employment and management practices for the federal workforce.

Today the agency is widely viewed as slow and ineffective, though, with a long-lingering backlog of background investigations and risk-averse leadership that has failed to respond to calls for faster hiring and recruiting for a changing workforce.

“In order to really ramp up the mission around people, we need to have an infrastructure for people management that is really world-class,” Weichert said.

The plan has raised suspicions among federal employees, who have watched the administration attempt to freeze their pay, weaken the power of their unions, and move to clear a faster path to discipline and firing.

The American Federation of Government Employees, the largest federal employee union, with 750,000 members, is calling the idea “Trump’s Dangerous Plan to Abolish OPM” and predicting a “disastrous” result if policy for federal employees moves so close to the White House.

Federal employees “would be forced into a fight for the pay and benefits they’ve earned every time an administration decides they want to free up money for a pet political project,” the union said.

Breaking up OPM is not a Republican idea, though. The Obama administration discussed internally whether to do it, and so did Hillary Clinton’s team in 2016, civil service experts said. And the agency drew bipartisan fury in 2015 when U.S. officials alleged Chinese hackers stole millions of personnel records by hacking through the agency’s weak security system.

Plenty of federal departments have found themselves on conservatives’ wish lists for elimination over the years. President Ronald Reagan wanted to abolish the Energy and Education departments, for example. A few dozen agencies have shut down since the mid-1800s as Congress decided they had outlived their mission.

The little-known Bureau of Efficiency, for example, formed in 1916 under President Woodrow Wilson to devise a filing system for federal offices, closed in 1933. The U.S. Metric Board existed from 1975 to 1982 to promote the metric system. The Interstate Commerce Commission folded in 1995 with 400 employees, down from 2,000 during its heyday regulating interstate business in the 1970s.

But the personnel agency has a government-wide central management role, which makes abolishing it attractive to the Trump administration.

“It’s a mid-sized agency with outsize impact,” said Donald F. Kettl, a public affairs professor at the University of Texas at Austin who studies the civil service. “It touches every part of the government.”

The White House has left many details of its plan vague, including whether the number of political appointees would shrink and whether there would still be a need for an agency head. Some observers are puzzled by the administration’s recent decision to nominate a new agency director if there would be no agency to run.

Jeff Pon was forced out in the fall after just seven months because he opposed the breakup and authorized his general counsel to write a 17-page memo to the Justice Department asking how it could be done legally, according to several people familiar with the document. It is unclear if the Justice Department responded.

Edwards noted that congressional auditors have criticized the GSA for years for weak management of its inventory of federal buildings. “If the GSA can’t manage buildings very well, why would we think it could manage people with the addition of OPM?”