Cokie and Steven Roberts: No, America is not ‘full’ 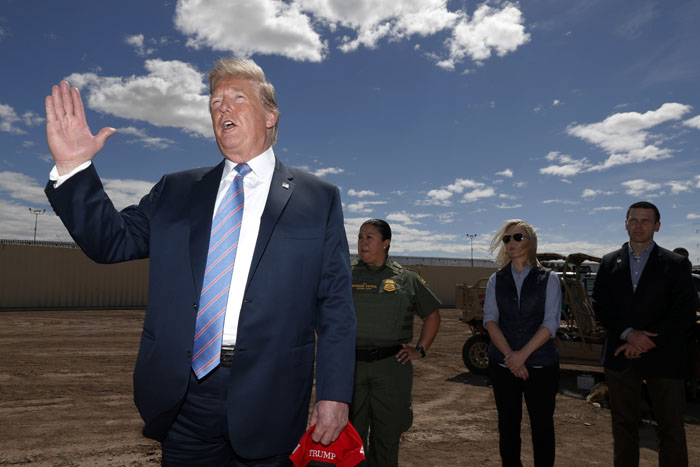 President Donald Trump recently traveled to the Mexican border and delivered one of the most foolish and fallacious statements of his entire presidency. Speaking to the surge of immigrants seeking asylum here, he said, “We can’t take you anymore. Our country is full.”

No, it is not full. It is not close to being full. In fact, the opposite is true. As aging baby boomers leave the workforce and depend more heavily on costly government services, more immigrants are desperately needed to fill jobs, pay taxes, have babies and revitalize areas that are losing population.

Trump’s anti-immigrant rhetoric serves only one purpose: to energize his supporters by inflaming the nativist fears that have periodically engulfed the country throughout our history. He firmly believes those fears helped elect him once and will again.

From a political standpoint, that calculation is questionable. Trump’s denunciation of brown-skinned rapists and gangsters pouring across the southern border certainly helped his campaign in 2016, but last year, when he tried the same cynical scare tactics, his party lost 40 seats in the House.

Clear majorities in national polls have consistently opposed his immigration policies. From an economic standpoint, however, his war on immigrants is a disaster that would suffocate the sustained growth he loves to brag about. And in rare rational moments, when he acknowledges fiscal reality, the president admits that his own policy is crazy.

“I got all these companies moving in,” he boasted recently. “They need workers. We have to bring people into our country to work these great plants that are opening up all over the place.”

Under great pressure from business interests, Trump’s own Department of Homeland Security doubled the number of visas available for temporary guest workers this summer. Indeed, Trump’s own resorts and golf courses have long employed foreigners — a graphic rebuttal to his own inane comments.

“It’s ironic that Trump is demagoguing and railing against a so-called dangerous and scary flood of migrants and caravans from Mexico and Central America, and even threatening to shut down the border, while at the same time using his legal authority to grow a guest worker program,” Daniel Costa, an immigration expert at the Economic Policy Institute. told the Washington Post.

There are short- and long-term implications here. Since June, for the first time since 1970, there have been more jobs available than workers seeking them. Many industries, from agriculture and food service to construction and health care, are frantically seeking immigrants to hire.

“For all the fears of robots taking over jobs,” reports The New York Times, “some economists are worrying about the broader economic fallout from a lack of low-skilled workers. And businesses across the economy are complaining that without immigration, they will be left without a workforce.”

Dallas homebuilders tell the Times that a lack of workers is adding $6,000 to the cost of every new home and delaying completion by two months. Larry Cox, who farms in California’s Imperial Valley, said the labor shortage is driving “a large transition of growing from California down to Mexico.”

The problem is aggravated in areas like New England that are losing population. Phil Scott, the Republican governor of Vermont, said recently in his annual budget address: “I believe our biggest threat is our declining labor force. It’s the root of every problem we face. This makes it incredibly difficult for businesses to recruit new employees and expand, harder for communities to grow and leaves fewer of us to cover the cost of state government.”

Older cities from Philadelphia to St. Louis are actively recruiting foreigners to restock urban neighborhoods as earlier settlers depart for the suburbs. “One of the key solutions” to urban blight is “to welcome immigrants into these communities,” said Brooks Rainwater of the National League of Cities to the Times.

If anything, immigrants are even more important to the nation’s future economic health. U.S. birthrates are plummeting, and last year, population growth sank to its lowest level in 80 years. Newcomers accounted for nearly half of that increase. And by 2030, foreigners will be “the primary contributor to national population growth,” estimates demographer William Frey of the Brookings Institution.

These demographic trends, says Frey, require “a more serious discussion of U.S. immigration policy because of the future contributions that immigrants will make to growing America’s society and economy.”

True, that serious discussion is imperative. But Trump’s tirade about a “full” America is totally wrong and typical of his damaging determination to believe half-baked fantasies instead of proven facts.