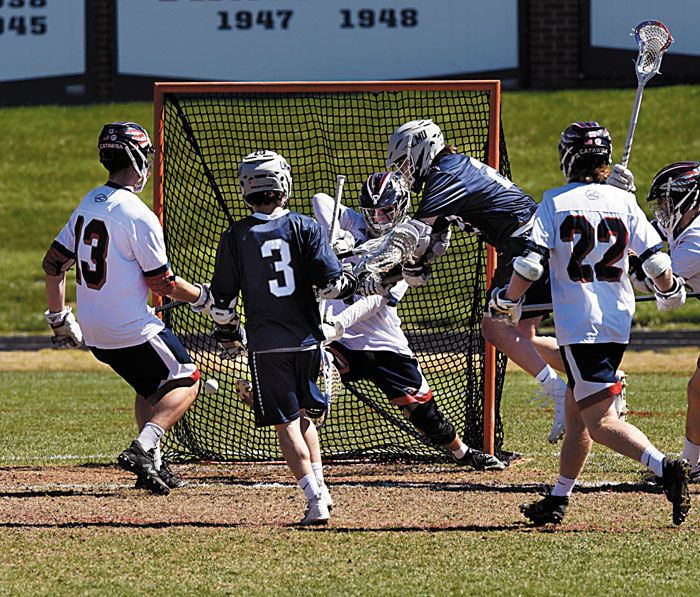 SALISBURY — Catawba remembered the past Saturday at Shuford Stadium, then held on for a men’s lacrosse victory that won’t soon be forgotten.

The Indians welcomed about 60 former players from the program’s 26-year history and treated them to a feverish, 13-12 South Atlanta Conference win over No. 10 Queens University.

“We’ve been looking forward to this game all season,” senior Cole Fanzo said. “It’s been circled for a long time — and with each passing week, it kept getting bigger and bigger.”

The game’s importance was magnified because it lifted Catawba (9-4, 6-1) into a tie for the conference lead with one game to play. A victory next Saturday at Tusculum would make the Indians SAC champions for the first time since 2007.

“It was like we always say, ‘Who’s gonna hold the rope and pull the team through?'” explained coach Peter Bourque, a post-game smile pasted to his face. “We’ve been using that analogy all year.”

The answer started with Fanzo, who broke out a mini-slump and scored five goals — including what proved to be the game-winner with 1:38 remaining in the third quarter. Not to be overlooked was the stout play of junior goalie Kevin Geiger, who made five of his 16 cat-quick saves in the final period.

“It was definitely stressful,” the New Jersey native said, after facing 42 Queens shots. “A big key was keeping my composure. The calmer you are, the easier it is to focus in stressful situations like that.”

Catawba was ranked 19th nationally in the most recent Division II poll, but suffered insulting losses in its past two outings — 24-7, at Limestone, on April 5 and 17-5, at Lenoir-Rhyne, last Wednesday. Queens (11-2, 6-1) came to town riding an eight-game winning streak.

“The previous two games we never found ourselves,” Bourque said. “Today we got it back — and it was an experience.”

It was. Catawba served notice when it escaped the first quarter trailing 3-2, despite committing seven turnovers. A four-goal flurry in the second — Fanzo scored twice while Christian Norrie and Joey Monfort once each in a seven-minute span — helped the Indians slip-slide to a 6-3 lead. The guests closed within 8-5 when sophomore Quinn Tallant converted a doorstep feed with 4.7 seconds left in the half.

Catawba built four-goal leads on three occasions in the head-spinning third quarter. Each team scored five times and was penalized twice. Fanzo’s unassisted goal late in the period was his 40th of the season and made it 13-9, coming on a perfectly sequenced pass from unheralded teammate Isaiah Welch.

“We had just killed a penalty,” Fanzo recalled. “And Welch and I, we always trust each other on the risky ones. He fed me right across the back door, right across the goalie’s face. I handled it and buried it.”

The fourth period was a deadlocked chess match for more than 10 minutes. Tallant pulled Queens within 13-11 when he beat Geiger on a man-up flick shot with 4:29 to go. The game’s final score was netted by midfielder David Byrne, who collected a loose ball in his own end, stampeded some 50 yards through the middle of the field and whipped a 10-yard shot past Geiger — who was none-the-less spectacular in the waning moments.

“We really had to keep our heads,” said Catawba defender Keenan D’Arcy. “It was almost a bend-but-don’t-break kind of defense. And (Geiger), he baled us out multiple times. We never thought we’d blow the lead because we had Kevin in the cage.”

“Well, we like to keep things interesting,” Fanzo joked afterward. “And it still took everything we had. When the game was on the line, we trusted our goalie and he got us here.”