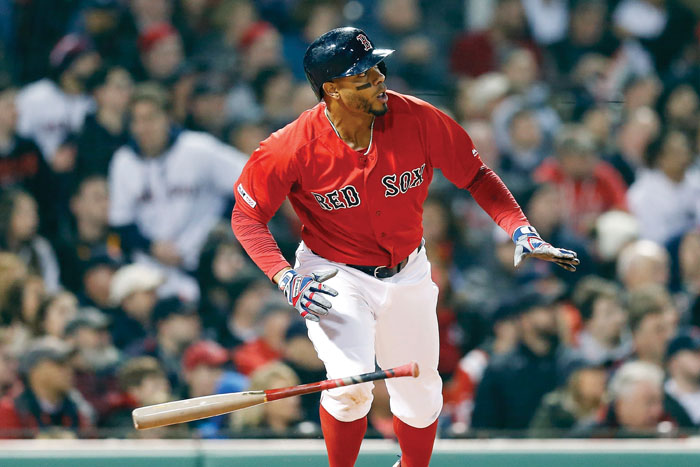 Gordon, Royals end 10-game losing streak, beat Indians 8-1
KANSAS CITY, Mo. (AP) — Alex Gordon could smile about his base-running mistake because of an otherwise great game.
Gordon homered, doubled twice and singled as the Kansas City Royals stopped a 10-game losing streak, racing to a big lead and beating the Cleveland Indians 8-1 Friday night.
“Yeah, bad turns around the bases,” Gordon said of getting thrown out at third while trying to stretch his second double into a triple. “We practice that all spring training. You’re supposed to hit it with the right foot and cut the corners. I think both bases I hit it with the left foot and almost fell down.”
Gordon said he was definitely thinking about a cycle.
“When I was going around first I kind of thought about it. I was like, ‘Let’s try to get a triple here.’ You’re never supposed to get the third out at third, but I wanted to try for it.
“I knew I had a double and a homer. The hardest one to get, especially for me, is probably the triple. That was the perfect situation. They had a good relay, and I’m not that fast anymore.”
Gordon homered during a six-run first inning against Carlos Carrasco (1-2).
The 10-game losing streak was the longest for the Royals since last June 29-July 9, when they also lost 10 straight. Starting pitcher Brad Keller said it was on everyone’s mind, though they were confident it would end soon.
“That was kind of the vibe in the clubhouse — when is it going to happen, especially after a tough loss yesterday (to Seattle in 10 innings). To go out there and (have) the offense put up six runs in the first, it was very comforting to go out there and pitch.”
The Royals hit for the cycle in the opening inning — Whit Merrifield led off with a single, Adalberto Mondesi followed with a triple and Gordon homered, with Chris Owings’ two-out, two-run double finishing Carrasco.
“Right off the bat, (he) just didn’t look like he was letting it go with conviction,” Indians manager Terry Francona said of Carrasco. “Pitching out of the stretch after the first hitter, it just unraveled from there. That makes it really tough on the staff, because then you’re looking at trying to go eight innings with your bullpen, which puts a real strain on everybody.”
Keller (2-1) gave up one run on three hits, striking out a career-high 10 in 6 2/3 innings. He has pitched at least six innings in nine straight starts, the longest active streak in the majors.
Keller’s 118 pitches were the most by a Royals starter since James Shields threw 124 on July 29, 2014.
“I felt good,” Keller said about heading to the mound with 105 pitches in the seventh. “I didn’t feel like it bothered me much. My whole goal was to pump strikes, to prove to them I could go out there and pitch with 105 pitches.
“Besides the five walks, the 10 punches (strikeouts) were good. Maybe if I don’t walk any guys, I get deeper in the ballgame. That was the one downfall from tonight.”
Tyler Naquin hit a 420-foot home run in the second, snapping a streak of 54 innings in which Keller hadn’t allowed a homer. It had been the longest active string in majors.
The Royals added a run in the sixth on a double steal.
TRAINER’S ROOM
Indians: SS Francisco Lindor is going to run the bases again Saturday, according to manager Terry Francona. Lindor has not played this season with a right calf strain and a left ankle sprain. “If all goes well, then we’re going to reconnect with the doctor, and see what he thinks the next step is,” Francona said. … 2B Jason Kipnis is on a rehab assignment in Triple-A Columbus. Francona said he’s doing well recovering from a low-grade right calf strain, and he expects to see Kipnis sometime on the current road trip to Kansas City and Seattle.
Royals: CF Billy Hamilton was kept out of the lineup with a mild MCL sprain and a bone bruise on his left knee. He tried to make a game-saving catch with two outs in the ninth inning of Thursday’s loss to Seattle. The Mariners had two runners on, down 6-4, when Mitch Haniger drove one to the wall in left center. Hamilton battled the wind and the sun before crashing into the wall. “When I first did it I thought it was way worse than what it turned out to be,” Hamilton said. “I’m happy about that. It’s too early to be in that situation. I’ll do everything I can to get back in the lineup. I feel a lot better than I did yesterday. I can play through a little pain.”
ROSTER NEWS
Indians RHP Jefry Rodriguez was being called up from Triple-A Columbus after the game. He will make his first start with the Indians after one start with Columbus, where he allowed three runs on seven hits over 5 1/3 innings.
UP NEXT
Indians RHP Jefry Rodriguez will make his season debut for the Cleveland. He was acquired by Cleveland as part of the trade that sent Yan Gomes following the 2018 season.
Royals RHP Homer Bailey (0-1, 9.00 ERA) will be looking for his first victory since May 12 of last season.
___
More AP MLB: https://apnews.com/MLB and https://twitter.com/AP_Sports