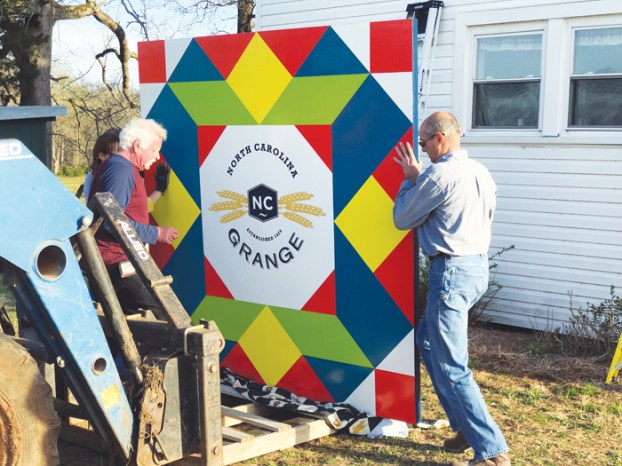 ATWELL TOWNSHIP — It may seem like barn quilt mania has hit the southwest corner of Rowan County, but another geometric beauty has gone up, with several others in the works.

Back in March, the Corriher Grange Hall on Corriher Grange Road was outfitted with a 7-by-7-foot barn quilt on the northern end of the building. It becomes another viewing spot on the ever-growing Rowan County Barn Quilt Trail.

Also in March, Millbridge Elementary School added a barn quilt to the outside of its building.

The colorful block at Corriher Grange Hall includes the N.C. Grange logo at the center surrounded by a custom pattern by Elsie Bennett, one of several barn quilt artists in the county.

The Grange quilt’s stained-glass motif represents the patchwork of fields in aerial views and also includes hidden symbols like crowns and colors in Grange blue, red, gold and white designating various principles of the organization.

Adele Goodman, a chief promoter of barn quilts from the beginning, says she and Bennett are trying to track and inventory all the quilts in Rowan County, “but they are going up so fast, it’s hard to keep up.”

Goodman, who also has a big hand in producing an annual barn quilt calendar, says she can guarantee there are about 75 in place on barns and other buildings.

“We do know that Rowan has the largest concentration of large barn quilts in the state in the southwest area,” Goodman says.

She reports that from Caldwell to Millbridge roads and from Saw to Corriher Springs and Corriher Grange roads, there is a significant-sized (at least 6-by-6-foot) barn quilt about every 2 miles.

Bennett will soon have a map in her store — West Rowan Farm, Home and Garden Center — pinpointing all the barn quilts in the county.

Bennett’s store has become sort of a “Barn Quilt Central,” Goodman says, with people often painting new barn quilts at the store itself.

Bennett currently is working on what’s believed to be the largest community barn quilts in North Carolina and possibly the second-largest in the United States. It will eventually go on the side of the Bennetts’ store facing Graham Road and be visible from N.C. 801.

Meanwhile, barn quilts also are in the works for the Country Life Museum near the entrance to Sloan Park.

Goodman plans to finish the 2020 calendar this July, so it can go on sale by August. She says it will highlight 20 more quilts on barns, schools and businesses.

A Corriher Grange member provided some of the following history on the grange.

Corriher School, the first schoolhouse in the Corriher community, was built of logs in 1810 and stood at the top of a hill by a spring near the present Corriher Grange Hall.

A new structure followed in 1916, and it is part of the present Corriher Grange Hall. Corriher School occupied the building until the 1934-35 term when it was consolidated with Landis School.

Corriher Grange No. 627 was chartered on Sept. 18, 1929. The last names of charter members such as Bostian, Corriher, Karriker, Leazer, McLaughlin and Smith are still well known in the community today, and descendants remain active members.

Meetings were held at first in members’ homes. The current building was acquired in the spring of 1937.

In 1938, the Grange remodeled and enlarged the structure, doubling its size. The entrance and porch were moved to the west side facing Corriher Grange Road, making additional space for a stage on the south end.

A kitchen was added on the north end while a large assembly room next to the stage with folding doors created a room for Junior Grangers to meet.

Several events during the first year of Corriher Grange’s existence continue to be a part of yearly activities.

They include the New Year’s Feast with oyster stew and hot dogs and an annual ice cream social each August.

In 2018, Corriher Grange’s oldest member, Philip Sloop, passed away at age 101. He served as chaplain for many years and was a Grange member for 80 years.