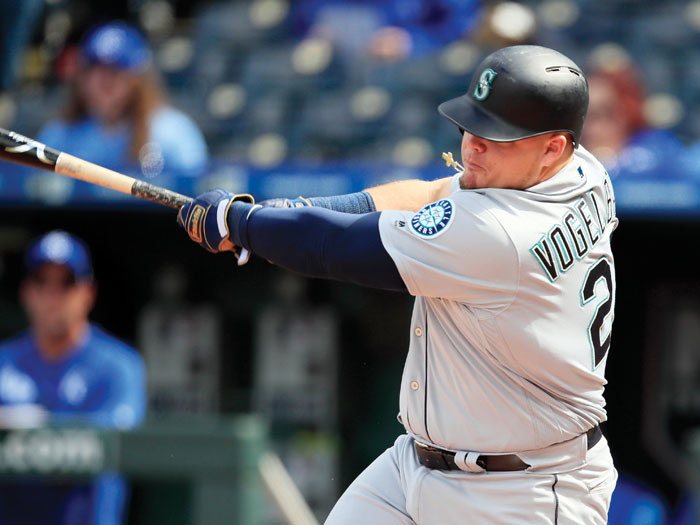 KANSAS CITY, Mo. (AP) — Seattle became the first major league team to homer in each of its first 15 games when Dee Gordon connected in the sixth inning, then beat the Kansas City Royals 7-6 Thursday behind Daniel Vogelbach’s home run in the 10th inning.

Seattle improved the best record in the major leagues to 13-2, completing a four-game sweep and extending its winning streak to six. The Mariners became just the third team since 1987 to open with at least 13 wins in the first 15 games after Milwaukee (14-1 in 1987) and Boston (13-2 last year).

Kansas City has lost 10 straight games, has the poorest record in the big leagues at 2-10 and is off to its worst 12-game start since 2006. The Royals failed to preserve leads of 4-0 in the sixth and 6-4 with two outs in the ninth.

Kansas City’s Whit Merrifield had his hitting streak end at 31 games. Merrifield went 0 for 6. He had not gone hitless since Sept. 9.

Vogelbach hit a 427-foot drive off Glenn Sparkman (0-1) for his sixth home run this season.

ST. LOUIS (AP) — Matt Wieters drove in a three runs and stole a base for just the third time in six years, leading St. Louis over Los Angeles for a four-game sweep of the NL champions.

Making his first start this season, the 32-year-old Wieters hit a sacrifice fly in the second inning and a two-run double in the fifth that put the Cardinals ahead 8-7. With runners at the corners in the fifth, Wieters stole second as Matt Carpenter struck out, his first steal since April 27, 2017, and just the ninth of his major league career.

St. Louis’ bullpen combined for 5 1/3 scoreless innings in the series finale and allowed one run in the four games.

Chris Davis was 0 for 3 with a walk. In the fourth season of a $161 million, seven-year contract, he is 0 for 32 this season and hasn’t gotten a hit since Sept. 14, setting the mark for most consecutive hitless at-bats by a non-pitcher.

CINCINNATI (AP) — Yasiel Puig returned from a two-game suspension and doubled home a pair of runs, and Cincinnati completed a reinvigorating three-game sweep of Miami.

The Reds entered the series with eight straight losses and the worst record in the NL. They came away with their first three-game sweep of the Marlins at Great American Ball Park since 2010.

Bieber (1-0) struck out six with one walk, improving to 8-0 on the road in his young career. Cleveland has won six of seven after taking two of three in this series.

BOSTON (AP) — Rafael Devers hit an RBI single with one out in the ninth inning and struggling Boston beat Toronto for its first home victory of the season.

Marcus Walden pitched a scoreless ninth to earn his second victory of the season.

The loss went to Ken Giles (0-1), who gave up two runs, two hits and walked three in the ninth, ending his streak of 34 consecutive converted save opportunities dating to Sept. 12, 2017. It was the longest active streak in the majors.

Steven Matz (1-0) pitched six innings and snapped the longest streak of no-decisions in Mets history. He had gone eight straight starts without a decision, a streak that began Sept. 1. He allowed two runs and four hits with one walk and eight strikeouts.

Alonso hit a two-run homer in the seventh off reliever Jonny Venters, a 454-foot laser with a 118 mph exit velocity that wound up floating in the water beyond straightaway center. The only players to hit a ball harder since the inception of Statcast are Giancarlo Stanton, Aaron Judge and Mike Trout.

Ronald Acuña Jr. homered off New York reliever Luis Avilán in the eighth, his fifth homer sailing 462 feet over the left field wall and into the second level of stands.

Daniel Descalso and Victor Caratini each had two hits and an RBI in a game that was delayed 69 minutes by rain before the eighth.

Quintana (1-1) bounced back after being roughed up for eight runs and eight hits in three innings against Milwaukee in his first start of the season last Friday. It was the longest outing by a Chicago starter this season.

Steve Cishek pitched the eighth and Pedro Strop got three outs for his first save. The Cubs took two of three in their first home series after opening with a 2-7 road trip.

Warriors start playoff road, without LeBron there at the…