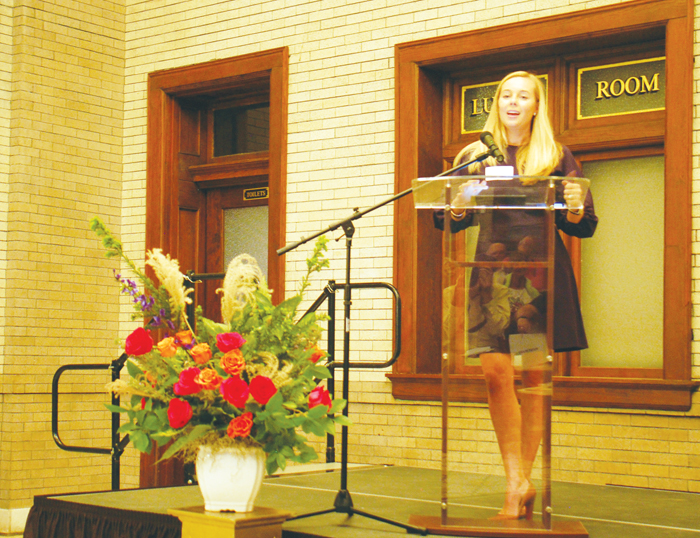 It just seems right that she and her husband, Will, know the glee, panic and wars involved in restoring a neglected Beaufort home near the waterfront to its former beauty.

And it’s fitting, indeed, that Kristy Woodson Harvey would return to her native Salisbury on Thursday night to speak about her family and how it’s enmeshed in the historic fabric of the town.

If there was one message Harvey left her Salisbury audience of preservation enthusiasts, it was this: That they are “fighting for those who are to come and those who came before.”

Harvey spoke to the annual meeting of Historic Salisbury Foundation, which was founded on this day 47 years ago.

Since 1972, the organization has waged many preservation crusades and saved numerous landmark structures, including the 1908 Salisbury Station where Thursday’s gathering took place.

Harvey, a Salisbury High School graduate, has become a noted Southern writer and author. Her fifth book of fiction is set to debut May 7, and she is preparing for a six-week, 45-city book tour to go with it.

She is the daughter of Beth and Paul Woodson. Paul is a former Salisbury mayor who resisted requests in the past to wage campaigns for higher office. Beth Woodson would not allow it, Harvey said, noting his decision kept intact the record of no divorces in the Woodson family.

Harvey concentrated much of her talk on her great-grandparents, Walter and Margaret C. Woodson, and you could make a case, she noted, that Fulton Street could be renamed Woodson Street for all her family members who once lived there.

In her family — and arguably, in Salisbury — Walter and Margaret Woodson were legendary characters. To this day, Margaret Woodson is remembered for the charitable foundation she left behind and for the Davie County hunting lodge — the Boxwood Lodge — where she and Walter spent much of their time away from Salisbury.

Walter Woodson was a famous attorney and father of four sons — Walter Jr., Jim, Nelson and Paul — all of whom likewise went on to distinguished careers.

“In short, he was a character, and he liked to win,” Harvey said of Walter Woodson Sr., known for his theatrics in court.

Woodson Sr. also was a mayor, city attorney and state legislator and became a notable political figure in state and national circles. He was president of First National Bank in Salisbury and practiced law until he was 88.

Margaret C. Woodson proved to be a savvy businesswoman who managed a successful farming operation in Davie County and became an expert dealer in cotton futures.

Harvey regaled her audience with many interesting remembrances of the Woodson family and concluded, “There is no doubt Salisbury made me what I am through and through.”

Ed Clement, one of the founding members of Historic Salisbury Foundation, said the Woodsons left their marks as bankers, attorneys, doctors and business people.

Four generations of Woodsons have provided leadership and made a significant impact on the city, he said, noting Fulton, Council and Main streets all have buildings associated with the family over the past century.

Members of the Margaret C. Woodson Foundation board attended Thursday’s meeting, taking up two rows at the front.

The foundation’s membership conducted a quick business meeting before Harvey’s talk, and board President Susan Sides also gave a review of the foundation’s activities through the past year.

They take the place of the late Doug Black and retiring board members Reginald Brown, Don Conner, Pam Morris and Joan Rusher.

Diane Dillon Hooper gave the treasurer’s report, noting the foundation has total assets of $3.8 million, of which $3.35 million is in fixed property, equipment, revolving fund properties and restricted accounts.

Also included in total assets is $293,657 in cash — made up of $114,832 in unrestricted funds, including an insurance payment to cover damage from a flood last August in the Archive Room caused by an old water heater upstairs.

The foundation also has $166,510 in board and donor-restricted funds.

In other Historic Salisbury Foundation news, Pete Prunkl has written a manuscript on the history of the organization, and after photographs are chosen it will be going to a printer and offered for sale, Sides said.

Next year will mark the 200th anniversary of the 1820 Hall House on South Jackson Street, an important property owned by the foundation.

“We hope that will be a big, successful event for us,” Sides said.

Salisbury photographers, artists to be featured in April 26…