Hamlin hoping for some hometown advantage 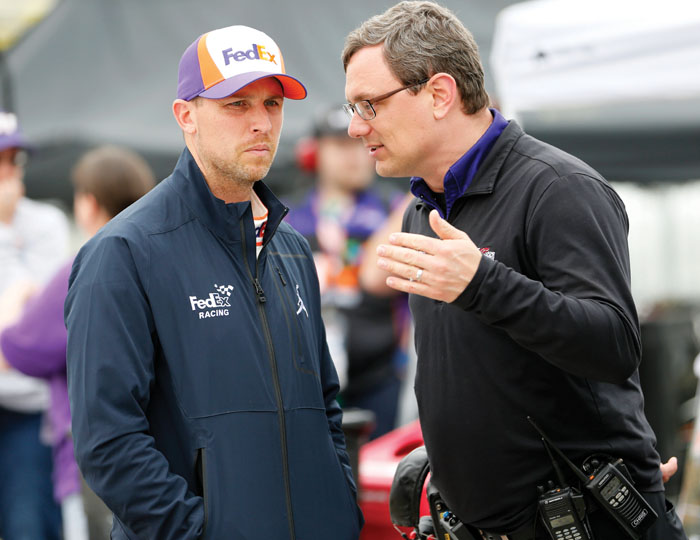 By HANK KURZ Jr. AP Sports Writer
RICHMOND, Va. (AP) — Denny Hamlin would love to think he has an advantage when it comes to racing at Richmond Raceway.
The Joe Gibbs Racing star has won three times on the 0.75-mile, D-shaped oval and has been coming to the track for much of his life, even long before the Virginia racer became a driver in the Monster Energy NASCAR Cup Series.
“I don’t know if there’s any advantage for sure, but I certainly feel like I know what I need out of the car to be successful here,” Hamlin said Friday. “Certainly this is kind of our wheelhouse for tracks you could say.”
The Daytona 500 winner has plenty of reason to feel good heading into the weekend. He’s already won twice this year, but his last victory at Richmond came in the fall of 2016. Teammate Kyle Busch swept both races last season, has already won three times this season and is trying to follow up a victory last weekend at Bristol.
Hamlin hopes familiarity can keep his solid start going.
“I’ve always loved coming to this race track. It is home. It’s one that I’ve been to many, many times when I wasn’t racing,” he said. “It is certainly the home track for me but it’s just exciting because I know that I could very well have a great weekend ahead of us, really focus a lot of my efforts on how can we go out there and dominate the race, not just win, but dominate. Really, that’s been the focus for the last five days.”
Teammate Martin Truex Jr. has been close to winning with second-place finishes at Atlanta and Phoenix, and said Busch is on the kind of role that makes him seem invincible. Besides his success in the Cup series, Busch has started four races in the Truck series and won them all, and won three of four Xfinity races.
“You look at a couple of races like last week. He even said he wasn’t going to win the race and the next thing you know he’s leading. They stay out and he’s leading and he drives off into the sunset,” Truex said.
“This sport is kind of cyclical. There’s a lot of highs and lows, but once you get on a roll — I’ve been on teams where you just get on a roll and you can’t do anything wrong. Then there’s other times like for us this year, it doesn’t seem like you can do anything right. It’s just the way it goes sometimes and you just have to work through it all and keep pushing to try to find more speed all the time.”
Busch admits that luck has been on his side at times this season, as well as momentum. If he can keep it going on Saturday night, he’d join three Hall of Famers — David Pearson (three, 1965-66), Richard Petty (seven, 1970-1973) and Bobby Allison (three, 1982-83) — as the only drivers to win three consecutive races on the track.
Such achievements, he said, are not his focus, but nonetheless special.
“If we can win three in a row here at Richmond and match names like that — the Godfathers of our sport that built our sport to what it is today — would be pretty cool,” he said.
So would keeping the momentum going. Busch has finished in the top 10 in each of his last 10 races.
“There’s no question there’s momentum. Absolutely,” he said. “You can go through the whole beginning stretch of the season — we’ve had a really good stretch to the beginning of this season and unfortunately we’re coming up to one of my most favorite race tracks in the world, Talladega, in a couple weeks, that can certainly end that momentum at any particular moment and knock you down off your pedestal or whatever you want to call it.
“Then you have to figure out how to rebound and get back. I think that’s where our strength is and we’ve had some moments in some of these races that we’ve kind of been knocked off that we’ve been able to rebound and come back up through. Just treat it like anything else and focus forward,” he said.
___
More AP auto racing: https://apnews.com/apf-AutoRacing