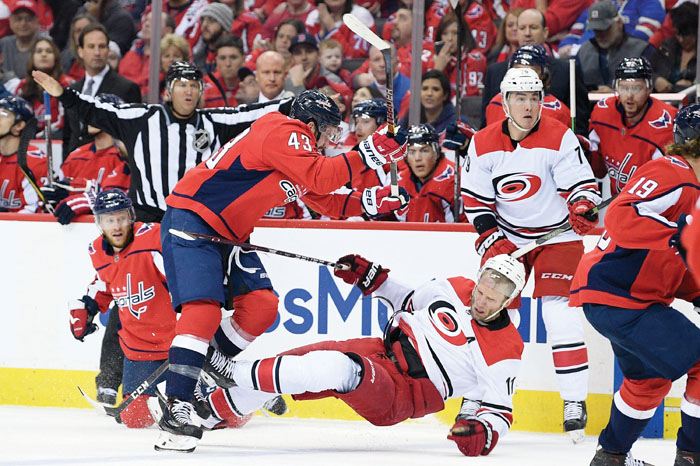 WASHINGTON (AP) — Nicklas Backstrom and Alex Ovechkin combined to score three goals on the first eight shots, and the defending Stanley Cup champion Washington Capitals survived a surge from Andrei Svechnikov and the Carolina Hurricanes to win Game 1 of their first-round series 4-2 on Thursday night.

Backstrom scored twice and Ovechkin scored on the power play to fire up a raucous sellout crowd in the first playoff game in Washington since celebrating the franchise’s first title in June. It looked like the Capitals would roll toward a statement victory against an opponent lacking playoff experience, but the pesky Hurricanes turned up the heat.

Mrazek bounced back from a rough start to make four huge saves early in the third period, while Svechnikov scored twice in his playoff debut to put some fear into the Capitals, who were outshot 29-18 and outplayed for long stretches. Braden Holtby made 27 saves and the penalty kill came up big on two late Carolina power plays to allow Washington to take a 1-0 series lead.

Capitals players had plenty of recent lessons to know that a multigoal lead isn’t safe this time of year. They led Columbus 2-0 in each of the first two games of last year’s playoffs before losing 4-3 and 5-4, and watched the Presidents’ Trophy-winning Tampa Bay Lightning blow a 3-0 lead to those same Blue Jackets and lose in Game 1 of that series Wednesday night.

It almost happened in this one. Well after the “Back-to-back!” chants faded into nervous silence, Mrazek rebounded from allowing a soft opening goal to Backstrom by stopping Nic Dowd and Carl Hagelin on breakaways and turned aside Brett Connolly and Lars Eller on rapid-fire chances early in the third before Svechnikov got the Hurricanes on the board. Mrazek finished with 14 saves.

Thanks to the goals by Backstrom and Ovechkin and defenseman John Carlson tying an NHL playoff record with three assists in one period, the Capitals built a large enough lead to survive an onslaught from the Hurricanes. Eller sealed it with an empty-netter with 36.6 seconds left.

The Hurricanes were playing their first playoff game since 2009 after ending the league’s longest drought. Carolina had 10 players making their playoff debuts, and its lineup had 342 games of playoff experience to Washington’s 1,282.

NOTES: With his 62nd career playoff goal, Ovechkin tied Bobby Hull for 27th on the all-time list. … Backstrom picked up his 100th career playoff point. … Carolina All-Star C Sebastian Aho was held without a goal for a 15th consecutive game. … D Calvin de Haan missed his fourth in a row with an upper-body injury. Coach Rod Brind’Amour said de Haan skated but had no timetable for his return. … The Capitals signed C Nic Dowd to a $2.25 million, three-year extension. … The Capitals recalled top prospect Ilya Samsonov to be their third goaltender for at least the first two games of the series.

The Capitals host Game 2 Saturday afternoon looking to take a 2-0 lead in a series for just the third time in the past five playoffs.

BOSTON (AP) — The Toronto Maple Leafs know they can’t count on short-handed penalty shots to help them get past Boston in the playoffs.

The hustle that forced the Bruins to make mistakes, though: That’s something they are planning to do over and over again.

and William Nylander also scored on a breakaway for Toronto, which swiped the home-ice advantage in the best-of-seven series as it tries to advance through Boston for the first time in six tries.

“It’s one game, but it gets us a step closer to where we want to get to,” said John Tavares, who added an empty-netter to clinch it. “It’s always good to start that way.”

Tuukka Rask stopped 29 shots for Boston, and Bergeron scored a power-play goal midway through the first on a pass from Brad Marchand. But Marner tied it with about three minutes left in the period, sweeping in a rebound with such force he knocked himself off his skates.

Then, about three minutes into the second with Boston on a power play, Marner flipped the puck ahead toward center ice and chased it down with a clear path to the goal. When he was just outside the crease, DeBrusk was called for bringing him down from behind, and he went crashing into Rask.

DeBrusk crashed hard into the boards and appeared to go to the locker room for attention, but returned to the game.

Marner lined up for the penalty shot, came at Rask from the left side and then slid over to the right faster than the goalie could follow. He pushed the puck into the open net to make it 2-1.

“I put my whole weight on my right foot, and then I just couldn’t get there anymore,” Rask said. “It was a nice move.”

Nazem Kadri sent Nylander off on a breakaway to make it 3-1 with 95 seconds left in the period. Rask came up with a pair of saves in the final minute to keep things from getting out of control, stopping Tavares on a breakaway with 38 seconds left and then a 3-on-1 at the horn.

“We know we’re a fast team in this locker room,” Marner said. “I think we know when we play right, it’s hard to stop us.”

Boston pulled Rask with 2:35 left, but Tavares scored off a center-ice faceoff with 79 seconds left.

NOTES: The Leafs have only been awarded four postseason penalty shots, and the only other time they have scored was Sundin against Buffalo on May 29, 1999. … The Bruins have given up six postseason penalty shots, just two of them successful. The last attempt was by Philadelphia’s Ville Leino in 2010. … The Bruins outshot Toronto 21-14 in the second period, but gave up two goals. … Muzzin, a trade deadline acquisition who missed the final regular-season game with an illness, assisted on Marner’s first goal.

Game 2 is Saturday night in Boston before the series moves to Toronto for Games 3 and 4 on Monday and Wednesday.

Packers have had a soap opera of an offseason