Barrett, Reddish to enter NBA draft after one season at Duke 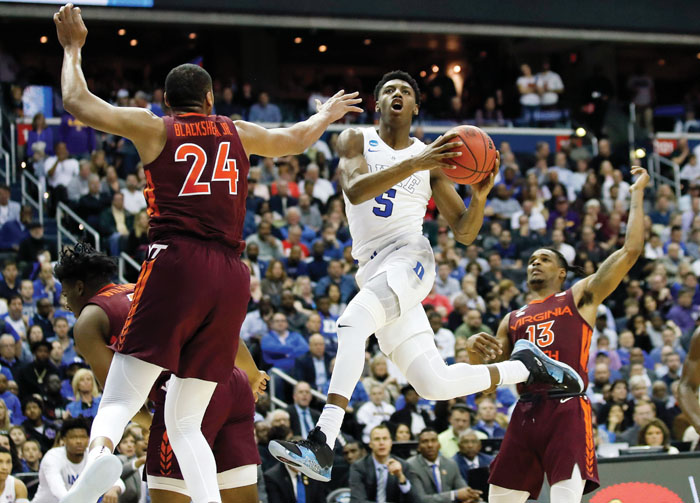 FILE - In this March 29, 2019, file photo, Duke forward RJ Barrett (5) drives to the basket past Virginia Tech forward Kerry Blackshear Jr. (24) and guard Ahmed Hill (13) during the second half of an NCAA men's East Regional semifinal college basketball game, in Washington. Barrett is leaving Duke after one season to enter the NBA draft. Barrett announced his decision Wednesday, April 10, 2019, in a video posted on social media. He calls playing at Duke a dream and adds that “it’s also a dream of mine to play in the NBA and have great success there.”(AP Photo/Alex Brandon, File)

DURHAM (AP) — RJ Barrett is leaving Duke after one season to enter the NBA draft.

Barrett announced his decision Wednesday in a video posted on social media . He said playing at Duke is a dream but added that “it’s also a dream of mine to play in the NBA and have great success there.”

School spokesman Mike DeGeorge said Barrett plans to hire an agent but has not yet chosen one.

The AP All-American averaged an Atlantic Coast Conference-best 22.6 points along with 7.6 rebounds while forming half of perhaps the nation’s most potent one-two punch along with classmate and roommate Zion Williamson.

Barrett is widely projected as a lottery pick.

The decision came as no surprise. After Barrett in February became the first Duke player since 2006 with a triple-double, coach Mike Krzyzewski said the ACC’s leading scorer was only “going to be here a very short time.”

He helped the Blue Devils earn a No. 1 ranking in the final AP Top 25 and claim the top overall seed in the NCAA Tournament. Duke was knocked out by Michigan State in the East Regional final.

Barrett was Duke’s most consistent scorer, scoring at least 13 points in every game with six 30-point performances. He had 33 twice — first in his college debut against Kentucky, and then in a home loss to North Carolina after Williamson left in the opening minute with a blown-out left sneaker and a right knee sprain.

Williamson and classmate Cam Reddish have not yet announced their plans for next season. Point guard Tre Jones said earlier this week that he would return for his sophomore year.

DURHAM (AP) — Cam Reddish is the latest Duke freshman to leave school for the NBA draft.

Reddish announced his decision on his verified Instagram page Thursday, one day after teammate RJ Barrett said he was entering the draft. School spokesman Mike DeGeorge says Reddish has hired an agent.

Reddish averaged 13.5 points and hit 33 percent of his 3-pointers, with several coming in clutch situations. That includes one with 0.8 seconds remaining to lift Duke past Florida State in January.

Reddish is widely projected as a lottery pick.

His decision leaves AP player of the year Zion Williamson as the last Duke freshman starter yet to announce his plans for next season. Point guard Tre Jones said earlier this week he would return for his sophomore year.

RENO, Nev. (AP) — Nevada moved quickly to replace one big-name coach with another.

Alford is expected to be introduced at a Friday news conference

“There is no better coach than Steve Alford to continue the rise of Nevada basketball and we are excited for the next chapter,” Nevada athletic director Doug Knuth said in a statement. “To get a leader of Coach Alford’s caliber is a testament to the support of our community and our University. There is a great tradition of Wolf Pack basketball and the future is even brighter.”

Musselman built up the Wolf Pack in four seasons, leading them to the NCAA Tournament three straight years before leaving for the SEC and the Razorbacks.

Alford returns to the Mountain West Conference, where he had some of his biggest successes. He spent six seasons at New Mexico, leading the Lobos to the NCAA Tournament three times, including a trip to the third round in 2012. Alford went 155-52 at New Mexico.

Nevada lost in the first round of this year’s NCAA Tournament and will have a massive roster turnover with seven seniors leaving, including the Martin twins and Jordan Caroline.

“To be able to continue my career in a tight-knit community that has demonstrated its support for the basketball program is exactly the opportunity that Tanya and I were looking for, and we are thrilled to be in Northern Nevada,” Alford said. “I can’t wait to get to work as we look to build off the established tradition and momentum of this great program. I want this to be the last stop of my coaching career.”

Alford had some early success at UCLA, leading the Bruins to the Sweet 16 three times his first four seasons. UCLA lost in the First Four in 2018 and struggled last season before Alford was fired on New Year’s Eve and replaced by interim coach Murray Bartow. Alford was 124-63 at Westwood.

Alford also coach at Iowa and Missouri State after a stellar collegiate career at Indiana and four NBA seasons. He has coached teams to the NCAA Tournament 10 times in 20 years as a head coach, but never to the Elite Eight.