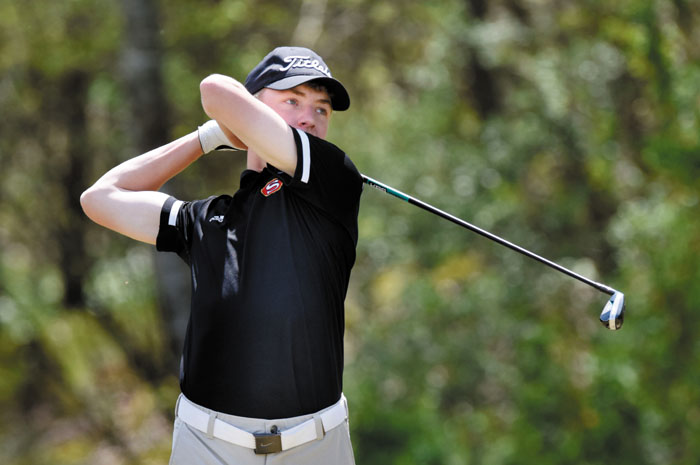 SALISBURY — The overall scores were not dazzling but the Salisbury Hornets had enough consistency to capture the Rowan County high school golf championship Thursday afternoon at Corbin Hills Golf Club.

Led by junior Hank Robins (80) and scores of 81 from young golfers Will Fowler and Will Webb, Salisbury edged East Rowan, 332-337. The Mustangs’ streak of four straight county titles was snapped, while the Hornets won their first championship since 2014.

“We got the 81s from Will Fowler (sophomore) and Will Webb (freshman),” said Robins. “With those scores, we should win the championship. I could have played better. I had three double bogies in four holes, so I had to just hang in there to finish strong.”

The individual spotlight for the day was on South Rowan junior Andrew Coward, who recorded a season-best score of 77 to claim medalist honors. “I haven’t shot that score all season,” Coward said, of his five-birdie round. “But I just found something in my round and kept the momentum going. I was sticking my wedge shots pretty tight and fortunately, I made some putts.”

Coward also has the distinction of being the first medalist not on the winning team since 2013.

South Rowan second-year coach Kurt Culbert said consistency has been a problem for Coward this season, but he proved he could play at a high level.

“Andrew is our number one player for a reason,” Culbert said. “And he has been a really good golfer for the last several years. The way he turned it around today, after some bad early holes, is the kind of golf he can play every day.”

As far as the team competition went, for the first time in a number of years, there was no clear-cut favorite. “This was truly a wide open tournament this year,” noted veteran East Rowan coach Rhett Teems. “Unlike recent past years, players could go to the first tee today knowing they have a real chance to win it. And that is a good thing.”

A total of 36 golfers from the six county programs took part in the event, with top four scores counting towards each team’s total. Salisbury’s tight top three scoring group secured the title with freshman Luke Graeber rounding out the Hornets’ total by carding a 90.

Salisbury is coached by Lucas Hatley.

Runner-up East Rowan placed their top four in the 80s, led by Austin Miller at 81. “I felt I could have played much better,” Miller said, as he lamented some putting woes. “The greens were really tough today. Downhill, they were extremely fast, then uphill, it was almost like you couldn’t quite get it to the hole.”

West Rowan finished a strong third as top golfer Davis Tadlock posted an 85 and Jake Carlton scored 87. But the real Falcons’ standout was freshman Owen with a team-best 83 that secured him the all-county spot.

“I am glad to be all county, but I could have played a lot better,” Owen said. “I had two triples and two doubles and missed an eagle putt on 18, so I could have been so much better.”

Carson’s Cougars were six shots back of West at 366 and were led by Ethan Scarborough’s 84 and Andrew Burke’s 86. Despite the medalist round by Coward, South Rowan settled for fifth place. Junior Andrew Jackson contributed an 82 to earn all-county honors.

North Rowan rounded out the field, led by Spencer Everhart, who shot a 92.

The local teams will wrap up regular season play this coming week then get ready for conference tournaments and regional play at the end of the month.