SALISBURY — Rowan County authorities are looking for two men wanted on charges of heroin and methamphetamine possession after officers said they witnessed a drug deal at a local gas station.

Authorities charged a woman with heroin and cocaine possession stemming from that same incident. 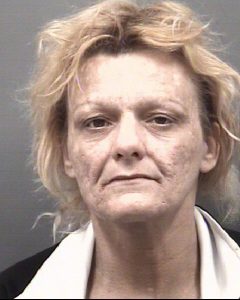 On March 15, a deputy was at the Pilot gas station on Peeler Road when he said he witnessed Honeycutt involved in a drug transaction. When the deputy approached Honeycutt, she admitted to having heroin and methamphetamine. The deputy was familiar with Honeycutt because of prior drug use, authorities said.

After buying some items at the store, Honeycutt moved near an air pump and a Honda pulled in front of her vehicle.

The officer approached Honeycutt, and she began to walk away. She stopped and handed him a plastic bag that she had been carrying in her pants.

After an investigation, Honeycutt was arrested April 3. She remains in the Rowan County Detention Center under a $29,000 secured bond.

She was additionally charged with failure to appear in court; misdemeanor child abuse; and maintaining a vehicle for trafficking in controlled substances.