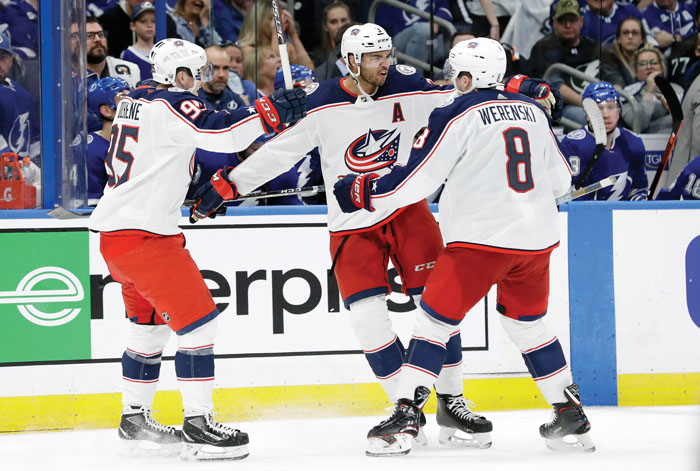 Jones made it 4-3 from the slot with 5:55 to play as the Blues Jackets erased a 3-0 deficit after the Lightning scored three times in the opening period.

With Columbus trailing 3-1 in the third, David Savard deked around Lightning defenseman Victor Hedman and scored 7:56 into the period to make it a one-goal game. Josh Anderson picked up a short-handed goal that tied it at 3 at 11:54.

Nick Foligno had the other goal for Columbus, and Sergei Bobrovsky ended up with 26 saves after struggling in the first period.

UNIONDALE, N.Y. (AP) — Josh Bailey scored on a rebound at 4:39 of overtime, leading the New York Islanders past the Pittsburgh Penguins in the opener of their Eastern Conference first-round playoff series.

Jordan Eberle had a goal and an assist, and Brock Nelson and Nick Leddy also scored for New York, which was opening a postseason series at home for the first time in 31 years. Robin Lehner stopped 41 shots.

Phil Kessel and Evgeni Malkin each had a goal and an assist, and Justin Schultz also scored for the Penguins. Matt Murray finished with 29 saves.

On the winning goal, Mathew Barzal brought the puck into the offensive zone on a 2-on-1 break, faked in front to draw Murray out and sent a backhand shot that bounced off the left post, but Bailey was there to knock it in.

WINNIPEG, Manitoba (AP) — Tyler Bozak scored with 2:05 left in the third period to give the St. Louis Blues the victory in Game 1 of the Western Conference opening-round playoff series.

Pat Maroon sent a backhand pass from behind the net out to Bozak in the slot, and Bozak’s quick shot went by Winnipeg’s Connor Hellebuyck for the go-ahead goal.

WASHINGTON (AP) — When the Carolina Hurricanes take the ice for Game 1 of their first-round series against the Capitals on Thursday, their blue line will have less playoff experience than top Washington defenseman John Carlson.

Of their 342 games of NHL postseason experience, captain Justin Williams and second-line center Jordan Staal make up 213 of that; half of the Hurricanes’ lineup will be making their playoff debuts. Washington has two such newcomers and 1,282 games of experience, thanks to its Cup run a year ago and many previous playoff trips.

The Hurricanes and Capitals are contrasts in almost every possible way. Carolina is a young, fast, aggressive team that ended a decade-long playoff drought. Washington is a seasoned group largely unchanged from winning it all in June and has its sights set on trying to do it again.

“Sometimes until you actually taste the result, you don’t know whether it’s worth it or not,” Capitals coach Todd Reirden said. “It’s so worth it and then some and I think that’s the opportunity that we were able to gain last year was knowing now how great it does taste and that should drive us through difficult times this year.”

The Capitals are in the playoffs for the 11th time in the past 12 years with Alex Ovechkin and Nicklas Backstrom. The last time the Hurricanes made it, coach Rod Brind’Amour was their captain and they were three years removed from their only championship.

Williams is the tie that binds them after spending the 2015-16 and 2016-17 seasons with Washington before returning to Carolina. He was a linemate of Brind’Amour’s during the glory days and was part of Capitals teams that lost in the second round twice before breaking through after he left.

“Perfect storm,” the 37-year-old winger said. “I want to beat the tails off them. They had their success last year, but obviously it’s going to be an extremely tough series against a proven, playoff-winning team.”

Ovechkin is coming off his eighth career 50-goal season and was the playoff MVP last year, center Evgeny Kuznetsov was the leading scorer on that run and goaltender Braden Holtby was the Vezina Trophy winner in 2016. The Hurricanes match that with MVP-caliber center Sebastian Aho, Williams, Staal and overachieving goalies Petr Mrazek and Curtis McIlhenney who helped get them into the playoffs as the first wild card in the East.

The Capitals are trying not to oversell their experience advantage and overlook the “Storm Surge” Hurricanes.

“They battled through all year and I think they are right now in a kind of playoff mode because they were fighting for that spot and they played hard,” Ovechkin said. “It doesn’t matter (if) your opponent is first year or Stanley Cup champions. We just have to play our game and play smart, play hard and get the result done.”

The Capitals won all four meetings against the Hurricanes this season, two in late March, and outscored them 15-9. But these teams have never met in a playoff series, and the style of hockey changes so much that there might not be much to glean.

“The games that we lost this year were tight, checking games that they found a way to win, which is what good teams do,” Williams said. “We can learn from that. We can look at those and say, ‘We’re right there,’ which of course we were. And playoff time’s a whole new animal. Their stats are down to zero, our stats are down to zero, and off we go.”

Washington won’t have top-four defenseman Michal Kempny because of a lower-body injury. Carolina is without Calvin de Haan (upper body) for at least the start of the series. Reirden is starting with Carlson on his off side with fellow righty Nick Jensen and Dmitry Orlov with Matt Niskanen and Brooks Orpik with Christian Djoos.

“We need to just step up, everyone on the D corps and help each other on the ice,” Orlov said.

Former Capitals coach Barry Trotz was the first to put Kuznetsov up against opponents’ top lines, and the offensively minded Russian star embraced the challenge. Expect Kuznetsov’s line to be matched up against Aho, Williams and Nino Niederreiter, and the way he defends is by forcing opposing skill players to spend time in their own end.

“It’s just about who’s going to play more with the puck,’ Kuznetsov said. “If you’re going to take away the puck from them, that’s how you can shut down the other team.”

Aho will need plenty of help if the Hurricanes are going to knock off the defending champs.

“You need everyone contributing,” Brind’Amour said.  “It’s playoff time. It always seems to be an unsung guy who has to step up and we’re going to need that.”