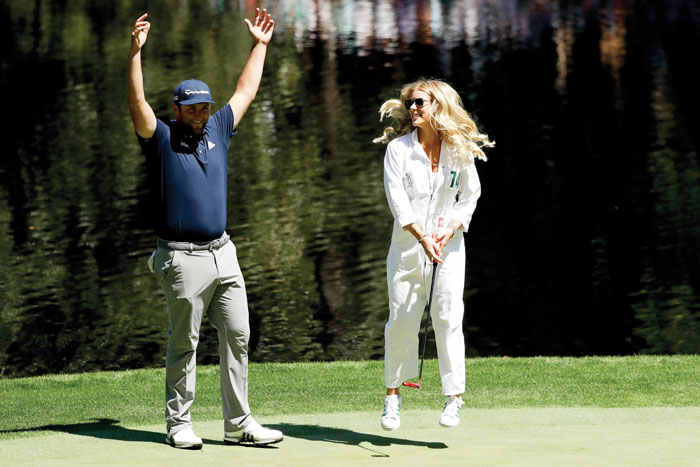 Jon Rahm, of Spain, and girlfriend Kelley Cahill react after making a putt on the ninth hole during the par-3 golf tournament at the Masters Wednesday, April 10, 2019, in Augusta, Ga. (AP Photo/Marcio Jose Sanchez)

Wallace’s hole-in-one was one of four in Wednesday’s family-friendly event that precedes the Masters, leaving him tied with Lyle at 5-under 22. The playoff rotated between Nos. 8 and 9, with both players making par on the first two holes. That took them back to the eighth, where Wallace nearly made another hole-it-one, plopping his tee shot less than a foot from the cup.

Lyle knocked his shot in the water, handing the victory to the 28-year-old Englishman playing in his first Masters. He is the ninth player — and the first since 2013 — to win the par-3 contest on his initial try.

But also worth noting: No winner of the par-3 has gone on to capture the green jacket.

Lyle, the 1988 champion, is playing in his 38th Masters. It was initially thought he had won the par-3 tournament, but officials discovered a scoring error that forced the playoff.

Masters chairman Fred Ridley said Wednesday that fans and players appreciate the fact cell phones are banned at the Masters, and there are no plans to change the policy.

“I know that we have now become an outlier, if not the only outlier in golf, as well, at allowing cell phones,” Ridley said. “But I think it’s part of the ambience of the Masters.”

Ridley cited comments made earlier in the week by Rory McIlroy about it being nice to see people actually watch shots instead of trying to take videos or pictures.

“I don’t believe that’s a policy that anyone should expect is going to change in the near future, if ever,” Ridley said. “I can’t speak for future chairmen, but speaking for myself, I think we got that right.”

Jon Rahm says he’s a work in progress when trying to control his emotions on the golf course.

That applies to the interview room, too, at least when he’s asked about his tempermental outbursts.

“I’m going to try to think a different way to answer that question for the 10,000th time,” Rahm said. “I really, really don’t know what to say.”

Actually, Rahm had a lot to say.

“It’s just the way I am. I’m a very passionate person in everything I do, for the good and the bad,” he said. “It’s very enjoyable when I win, and I really don’t like it when I lose.”

Rahm said he learned something at the Player’s Championship about controlling his temper, after ignoring his caddie’s advice and hitting it into the water in the final round while in contention. Rahm angrily hit his club on the ground and shouted an expletive.

Still, the Spaniard said, having some emotion on the golf course isn’t always such a bad thing.

Augusta National is building a golf club which Bobby Jones might not recognize.

This year players found the tee on the fifth hole pushed back 40 yards, the fairway regraded and the green flattened out. Fans may not notice the difference, but players say they are hitting hybrids at times to the green when the wind is blowing against them.

Next up? Well, how about a tunnel under the main road that fronts the golf course?

Masters chairman Fred Ridley said the tunnel is under consideration, and can be constructed without closing down Washington Road, which is lined by restaurants and other businesses. On the other side, he said, would be a large broadcasting compound and possibly more.

Tiger Woods is moving up the leaderboard at the Las Vegas sports books.

Woods had been a 14-1 pick to win his fifth Masters — and first since 2005 — but is now a 10-1 pick along with Dustin Johnson to win the green jacket at the Wililiam Hill books.