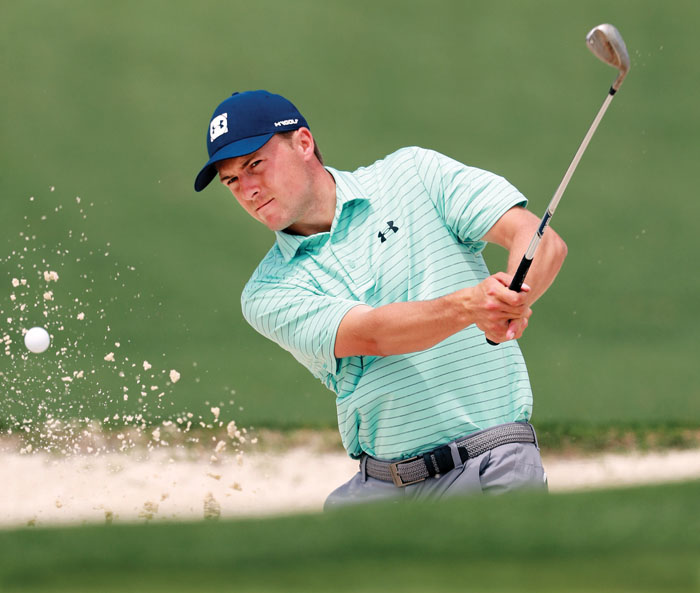 Jordan Spieth hits from the bunker to the second green during his practice round for the Masters at Augusta National Golf Club on Tuesday, April 9, 2019, in Augusta, Ga. (Curtis Compton/Atlanta Journal-Constitution via AP)

AUGUSTA, Ga. (AP) — Tiger Woods is a winner again, making him even more appealing at the Masters.

“I’ve worked my way back into one of the players that can win events,” he said.

Rory McIlroy is the betting favorite — perhaps even the sentimental favorite. Facing a fifth chance at completing the career Grand Slam at Augusta National, he has never started a year as well as this one. McIlroy won The Players Championship, played in the final group in three other events and has yet to finish out of the top 10 in his seven PGA Tour events.

“I’m happy with where everything is — body, mind, game,” McIlroy said.

Such words sound as soothing to Jordan Spieth as birds nestled in the Georgia pines. Any other year, Spieth would be a big part of the conversation when the 83rd Masters Tournaments begins on Thursday.

“I don’t feel like there’s any added pressure this week,” Spieth said. “I feel kind of under the radar, which is really nice.”

Maybe not for long.

Not since Woods has any young golfer established himself as a master at Augusta National. In five appearances, starting with then 20-year-old Spieth’s runner-up finish in his Masters debut, he has a green jacket, a share of the tournament scoring record, two silver medals for second place and a near historic closing round last year until he clipped a tree with his tee shot on the 18th hole, made bogey and had to settle for a 64.

His worst finish was a tie for 11th in 2017, and even then, he started the final round just two shots behind. No wonder he calls the Masters “my favorite tournament in the whole world.”

That’s what makes this year so intriguing for Spieth.

The next big thing in golf when he won the British Open two years ago for the third leg of the Grand Slam, the 25-year-old Texan is now in one big slump.

He hasn’t won since. He hasn’t finished in the top 10 in his last 15 tournaments, and even more jarring is that he has finished an average of just over 14 shots behind the winner, except for the three times he missed the cut.

It would figure that if any golf course could cure whatever is ailing him, it would be Augusta National.

Spieth is exuding patience, if not confidence.

“My expectations are high this week. I feel great about the state of my game right now,” said Spieth, coming off a 73-72 weekend in the Texas Open that took him from a tie for second to a tie for 30th. “I feel like my recent results aren’t a tell of where my game is actually at, and I feel I’ve made a lot of strides in the last couple days in the tee-to-green game. It’s just a matter of trust in the stuff that I’m working on, and I don’t feel like I have to play well.”

He is climbing out of a hole, and either the way out is taking longer than he would have thought, or the hole was deeper than he ever imagined.

Most telling was what Spieth said at the start of the year, when he returned from two-month break that included his wedding.

“I almost took ignorance as bliss in a lot of parts of my game,” he said. “I did things well, but I didn’t know why. I just did them. Then they got off, and so I had to figure out why I did them and how to train it back.”

McIlroy is among the top five players in the world who have a chance to leave the Masters with a green jacket and the No. 1 ranking. For such a small field — 87 players, six of them amateurs — the tournament is wide open. It’s been that way for years.

The difference is that Spieth usually could be counted on to be part of that mix. And he might be again.

“I feel I’m on the rise right now. That’s just the way I feel,” Spieth said. “I don’t think I need results to prove anything otherwise. I know where my game is at and I know that good things are coming soon.”

But there are far more whispers that this slump is not anything four days — or two — at Augusta National can cure; or that he’ll never play as well as his 2015 season at age 21 — winning the Masters and U.S. Open, missing the British Open playoff by one shot and finishing second at the PGA Championship.

“It’s frustrating to watch from this side everything that’s being said and written about him, because I know he’s close,” Justin Thomas said. “He’s going to play well this week. I really do think that. He’s shown strides all year. Just hasn’t been able to put it all together over the course of four days. But I would say his record at this course speaks for itself. … But the thing about this game is you have to let it happen.”

There’s no better time than now, no better course than this one.