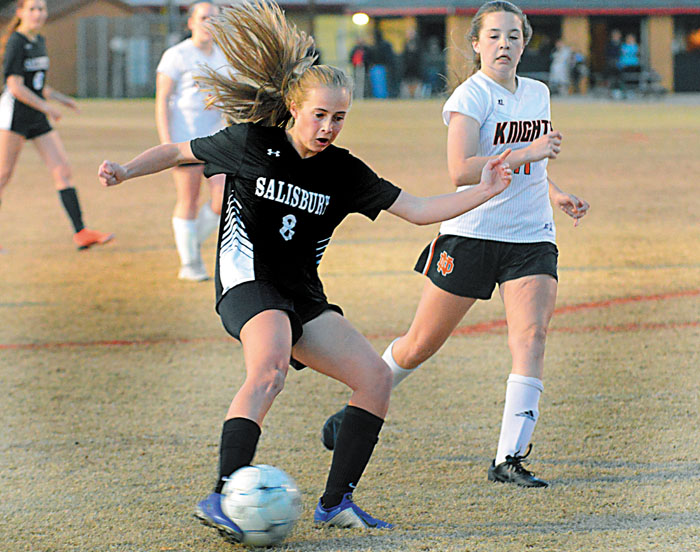 The Green Dragons overcame a 2-1 halftime deficit to take a 3-2 victory.

“There was a lot on the line, and obviously this was a huge swing in our league tonight,” Salisbury coach Matt Parrish said. “We win and we’re up two games in the conference and we own all the tiebreakers, but now we’re in a virtual deadlock with West Davidson, and a whole lot of things can happen. We’ve still got five games to play.”

West Davidson (14-1, 11-1) hasn’t lost to anyone in a long time. The Green Dragons’ only setback this season was at home to Salisbury, 5-0, back on March 6. That was the Green Dragons’ second game of the season

“It was 5-0 and maybe that made some of our girls a bit over-confident tonight, but I was well aware that the score of that first meeting wasn’t indicative of the relative strength of the teams,” Parrish said. “They hit the post twice in the first eight minutes that night, and everything just went our way. They didn’t know anything about (Salisbury freshman) Sutton Webb that early in the season. She scored a couple of quick goals and put them back on their heels.”

But  on Thursday it didn’t go the Hornets’ way early. West Davidson standout Cassie Riggs scored her 18th goal of the season to put the Green Dragons ahead 1-0.

Salisbury answered late in the first half, as it usually does. Lillie Rusher scored the equalizer on a set piece, with Clara Brown getting the assist.

Then Rusher assisted on a goal by Webb, who toed the ball past a charging keeper for a 2-1 Salisbury halftime lead.

“At that point, we’re 40 minutes away, and we felt like we were in pretty good shape,” Parrish said. “It was the kind of tough match we’ve been pulling out a lot in recent years. Tonight, we just weren’t able to pull it off. It was a chess match and they had the last move.”

West Davidson defender Jennifer Lopez shadowed Webb and was able to stifle her in the second half. The Hornets weren’t able to find other sources of offense.

West Davidson got a spark from Kailyn Owens. Riggs and both Lopez girls (Jennifer and Allesandro) had big matches.

“We weren’t able to get anything going offensively and defensively we made some mental mistakes that wound up leading to our demise,” Parrish said. “But mostly you just have to give credit to West Davidson. It was a clean match with no cards, but they clearly had something to prove. At times, their intensity overwhelmed us. We’re still a very young team at some spots, and it showed tonight. We’ve just got to learn from it.”

The Hornets, who won against Lexington on Wednesday, are scheduled to play again tonight at Ledford. Salisbury should be able to bounce back against the Panthers — if the teams get to play.

“But it’s supposed to start raining at about 4 a.m., so who knows?” Parrish said. “The only thing we know for certain is that it’s going to be interesting from here on out.”