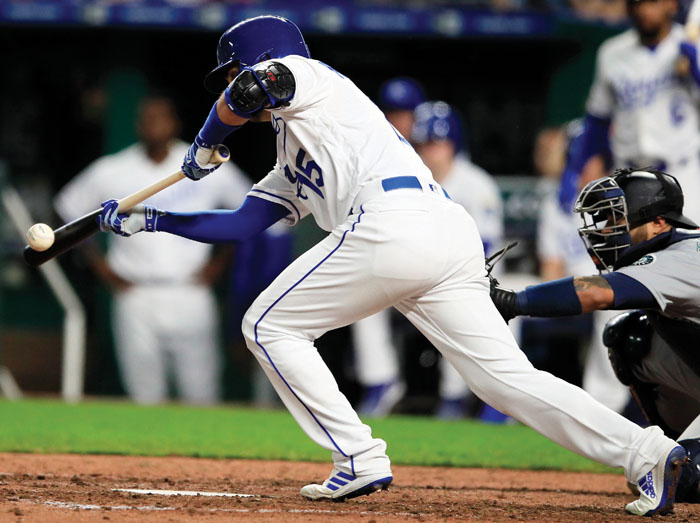 Kansas City Royals' Whit Merrifield bunts in a run during the seventh inning of the team's baseball game against the Seattle Mariners at Kauffman Stadium in Kansas City, Mo., Wednesday, April 10, 2019. The bunt gave Merrifield a 31-game hitting streak, breaking the old club record of 30 set by George Brett in 1980. (AP Photo/Orlin Wagner)

KANSAS CITY, Mo. (AP) — Even baseball’s hottest hitter can’t keep pace with the Seattle Mariners right now.
Mitch Haniger hit a tiebreaking homer with two outs in the ninth inning, lifting the Mariners over the Royals 6-5 Wednesday night after Whit Merrifield extended his hitting streak to a Kansas City-record 31 games.
Merrifield’s RBI bunt single in the seventh tied it at 5 and moved him past Hall of Famer George Brett for the Royals mark.
That pumped up the home crowd, but Haniger deflated it two innings later when he took Brad Boxberger (0-2) deep, lifting Seattle to 12-2 following an offseason roster overhaul.
“It was a nice team win,” manager Scott Servais said.
The Mariners and the 2002 Cleveland Indians are the only teams since 1908 to homer in each of their first 14 games. The Mariners have 34 homers, tied with the 2000 St. Louis Cardinals for most ever through 14 games. Seattle has scored at least five runs 13 times.
Haniger struck out in his two at-bats previous to the homer.
“Every at-bat I’m trying to swing at good pitches and hit the ball hard,” he said. “I hadn’t had great at-bats leading up to that earlier. I stayed confident that my time would come and I’d get a good pitch, and I put a good swing on it.”
Anthony Swarzak (1-0) got two outs in the eighth, and Roenis Elias worked out of a bases-loaded jam in the ninth for his second save.
Seattle’s Jay Bruce, tied for the AL homer lead with seven, left the game in the fourth inning with tightness in his left Achilles tendon.
Kansas City dropped to 2-9 with its ninth straight loss.
Merrifield bunted with Terrance Gore on third in the seventh. He placed the ball perfectly up the third-base line and tipped his cap to a cheering crowd after reaching first without a throw.
“I used to bunt a lot when I was young,” Merrifield said. “I couldn’t drive the ball. Those young years paid off.”
Gore made his first major league start and had three hits in the game after entering with two hits over six major league seasons. His two-out double helped Kansas City threaten in the ninth, but after Merrifield was walked intentionally and Billy Hamilton drew a free pass, Adalberto Mondesi popped up to end it.
“It put some pressure on us, but I thought we were in good shape,” Mariners manager Scott Servais said. “Gore got the big double, but Elias has done a great job for us all year with all the roles we’ve used him in. I didn’t know how much he was going to be available. But then we got the lead and he did a great job.
“They made some great defensive plays against us. Gore saved a bunch of runs for them, and Merrifield made a nice catch out there. We hit the ball hard but they played great defense.”
Yusei Kikuchi gave up three runs and five hits through six innings for Seattle. He retired the last 10 batters he faced after allowing the second of two home runs.
Jorge Soler hit a 454-foot home run in the third. Hunter Dozier also took Kikuchi deep.
LONG TIME COMING
Gore was part of the Royals’ back-to-back AL championships in 2014 and 2015 but usually as a pinch-runner. He has appeared in 67 games but had only 20 plate appearances. He got his first major league hit last season with the Chicago Cubs. He got his first hit with the Royals earlier this season.
“I don’t want to pigeon-hole him as a baserunner,” manager Ned Yost said. “I’ve watched him work his tail off — Alex Gordon-type work. I watch him take batting practice every day. He’s gotten stronger. His swing’s gotten better. As long as he’s working hard, I want to provide opportunity for him.”
TRAINER’S ROOM
Mariners: SS Tim Beckham returned to the lineup after missing two games with a tight right hamstring.
UP NEXT
Mariners RHP Mike Leake (2-0, 2.92 ERA) will get the start for the Mariners in the final game of the four-game series. He’ll face Royals RHP Jorge Lopez (0-1, 4.09 ERA).
___
More AP MLB: https://apnews.com/MLB and https://twitter.com/AP_Sports