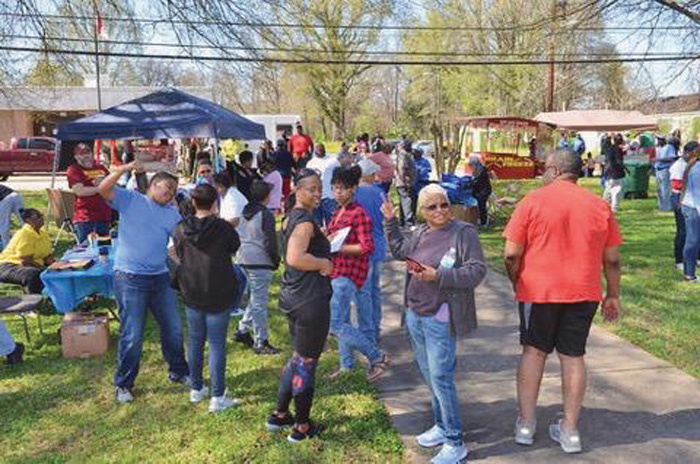 EAST SPENCER — After its first-ever food truck rally a week ago, the town of East Spencer is optimistic about the future of the event and the success of upcoming civic activities, said one alderman.

Tony Hillian, who spearheaded the April 6 gathering, said the idea for the April food truck rally came about after the town received a grant from the Morehouse School of Medicine to start a community garden and strengthen access to healthy food.

The town began a community garden in 2018, and food was the focus of this year’s truck rally. Happy Roots Inc., a local nonprofit group, provided education on gardening and how to create a community garden. The organization provides therapeutic and educational programs.

Hillian said he had attended a number of food truck rallies and thought one would be great for the town. Organizers partnered with Miller Davis to make it happen.

The former Rowan-Salisbury school administration building, across from Town Hall, was the site of most of the activity. North Long Street was blocked off for the evening.

Hillian said there was a large crowd, but organizers hope next year it will be bigger. They initially planned for about seven food trucks, but only four participated, and they were a hit. The local and regional food trucks were Finger Lickin’ Chicken, which sold dipped chicken and is based in Salisbury; Like That Hot Dog, based in East Spencer; Pelican’s SnoBalls of Salisbury; and A Pinch of Soul of Charlotte, whose vendor sold chicken and seafood.

Hillian said after the truck rally, many said they’d love to see something similar sooner than next year. He said the town plans to have another gathering later this year so people can get their food truck fix.

Some people suggested having them once a month or every Saturday, Hillian said.

“The hope is somebody may decide they’d like to open a restaurant in East Spencer,” he said.

The next few months will include the opening of Royal Giants Park on June 1; East Spencer Community Day on Aug. 3; and a soul food festival on Oct. 5.

Hillian said he hopes to fill a void left by the Rowan Blues and Jazz Festival after the death of its founder, Eleanor Qadirah. The soul food festival will feature food and a well-known soul music headliner along with local artists.

“It was a great experience,” he said of the food truck rally.