Altuve powers Astros to first-ever sweep of the Yankees 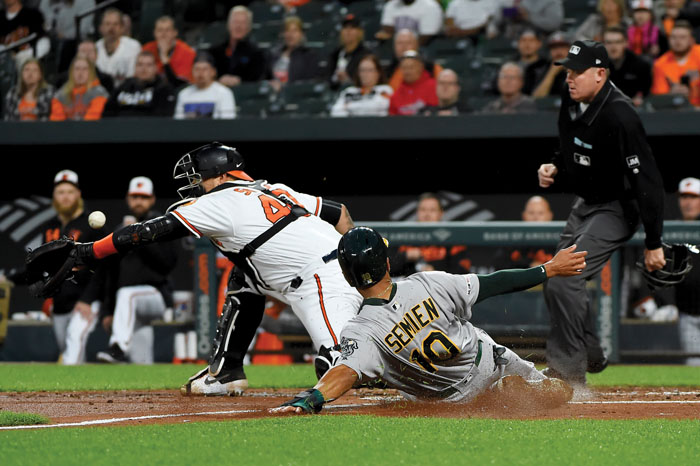 Oakland Athletics Marcus Semien (10) scores next to Baltimore Orioles catcher Jesus Sucre (40) on a double by Matt Chapman during the third inning of a baseball game Wednesday, April 10, 2019, in Baltimore. (AP Photo/Will Newton)

The Astros needed late-game comebacks to win the first two games of the series but used a four-run fifth inning to break the finale open and held on for their sixth straight win despite a big eighth inning by the Yankees.

It’s the first time since 2004 the Astros have swept a homestand of at least two series. They beat the Athletics three times this weekend before the Yankees arrived.

Altuve, who has homered in three straight games, hit his first one off James Paxton (1-2) to tie it at 1 in the first inning after Brett Gardner hit a leadoff homer for New York.

The Astros were up by 1 with no outs in the fifth inning when Altuve connected off Paxton again. The towering shot clanged off the light pole atop the wall in left field to make it 4-2.

A single by Michael Brantley chased Paxton, who was replaced by Tommy Kahnle. He was greeted by a two-run home run by Correa that extended Houston’s lead to 6-2. Houston made it 7-2 on an RBI single by Jake Marisnick with two outs in the inning.

SAN FRANCISCO (AP) — Manny Machado put San Diego ahead with his third home run of the season in a win over San Francisco.

Signed to a $300 million, 10-year contract, Machado broke a 1-1 tie in the sixth inning with an opposite-field drive to right on a fastball from Dereck Rodríguez (1-2). Machado went 1 for 4 and is hitting .244 with six RBIs.

Wil Myers added a run-scoring single in the ninth off Will Smith, and the Padres won for the fifth time in seven games.

The Cardinals have won four in a row and will try to sweep the four-game series Thursday. They have outscored their opponents 19-6 during the winning streak.

Max Muncy and Joc Pederson homered for the Dodgers, who have lost three straight after a five-game winning streak.

Paul DeJong had three hits and drove in a run with a triple in the sixth. DeJong extended his career-best hitting streak to 11 games. He is tied with San Francisco’s Brandon Crawford for the longest current streak in the National League.

Flaherty (1-0) gave up three hits and one run in his 99-pitch effort. He struck out eight and did not walk a batter. He has permitted one run over 11 innings in his last two starts.

Austin Meadows had a single, double, home run and three RBIs for the Rays, who outscored Chicago 24-7 over three games. Tampa Bay won its four straight game and the AL East-leading Rays improved to 10-3, their best start since 2010.

Chicago lost its fifth consecutive game and at 3-8 is off to its worst opening since 1997.

Meadows was 7 for 10 in the series with two homers, seven RBIs and four runs.

One night after wasting a five-run lead in a 10-6 loss in 10 innings, the Phillies were flat. Bryce Harper was 0 for 2 with a walk against his former team, and an offense that was averaging 6.3 runs per game got shut down by four pitchers.

Phillies outfielder Aaron Altherr struck out Brian Dozier and Yan Gomes while allowing one run in the ninth.

Nationals reliever Trevor Rosenthal retired a batter for the first time this season after allowing his first 10 to reach safely. He walked a hitter before striking out Andrew Knapp. Rosenthal then walked two more to load the bases. He gave up a run on a groundout, but Altherr flied out to end it.

Lyles (1-0) allowed three hits and was sharp again in his second start, with Jason Heyward’s solo shot in the fifth accounting for the lone run against him. The right-hander walked only one as Pittsburgh bounced back from a 10-0 drubbing in the Cubs’ home opener Monday to win for the fifth time in six games.

Chris Davis entered as a pinch-hitter in the ninth and flied out to center. He’s 0 for 29 this season and hasn’t gotten a hit since Sept. 14.

One day after the teams set a Citi Field record by totaling 10 home runs in the Twins’ 14-8 romp, the Mets barely had to swing to build a big lead.

A startling stretch that kept snowballing saw Odorizzi, newly promoted reliever Andrew Vasquez and Trevor Hildenberger combine to walk six and hit a batter with a pitch without getting an out. At one point, the Twins threw 21 pitches — 19 missed the strike zone, many of them bouncing or sailing all over.

Wilson Ramos grounded a two-run single that capped the crazy six-run rally in the fifth inning. The Mets could’ve scored more, but Jeff McNeil was picked off third after hesitating on a bases-loaded pitch that skittered to the backstop.

Miguel Cabrera singled with two outs in the first, and Goodrum sent the next pitch over the right-field wall.

Hicks homered leading off the sixth for a 3-1 lead, Gordon Beckham doubled with one out, and Josh Harrison singled on a bouncer up the middle to chase Bauer.

CINCINNATI (AP) — Jose Iglesias led off the eighth inning with a tying homer — only Cincinnati’s second hit of the game — and Jesse Winker connected one out later, rallying the Reds to a victory over Miami.

After dropping eight straight, the Reds (3-8) have taken the first two games against Miami by hitting seven homers. They hit five during a 14-0 victory Tuesday that ended the long slide.

The Reds managed only Matt Kemp’s single through the first seven innings and were facing their fifth shutout of the season before pulling off the late rally.