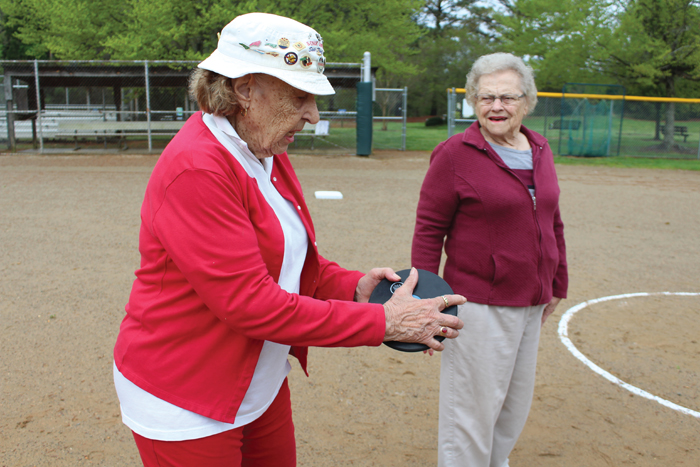 The sun was a welcome yet unexpected guest late Tuesday morning as folks gathered throughout Ellis Park for the kickoff of this year’s Salisbury/Rowan Senior Games.

Games began at 10 a.m. with a leisurely, set-your-own-pace schedule for participants, ages 50 and up. Senior players could try their hand at stations for shot put, discus, softball throw, football throw, spin casting and basketball shoot.

With each event measured by points or distance, players competed in age brackets for the top three slots in each sport and, with it, a chance to compete at the state level.

“Of course we have some here that go on to state,” said Savannah Daniel, Senior Games and SilverArts coordinator. “Others just come out here for the fun, just to be with everyone, that kind of thing.”

For Angie Newsome-Potter, who will turn 65 this year, her introduction into the world of senior games was a social one.

“My husband got me started,” she said, “He wasn’t my husband, then, but he was already doing it. I would go and watch him play ball.”

After playing spectator while still working full-time, Newsome-Potter said she used the flexibility of owning her own business to make time to try out the games.

She started with swimming, cornhole and bocce, but has since branched out to field events like Tuesday’s discus throw, football throw and basketball shoot.

“Whether I place or not is no big deal, it’s just about coming out and having fun,” she said, adding that she always enjoyed the social aspects of the events. “You meet so many people and get to chitchat with the ones that you do see at other sports.”

Hazel Owen Trexler-Campbell, who will turn 97 this year, agreed.

Trexler-Campbell has competed at both the state or national levels, holding seven State Finals records in the four field events offered: two in discus throw, two in running long jump and three in shot put.

She wasn’t the only Salisbury/Rowan Senior Games state record holder in attendance. Garland Thomas holds three records for the state basketball throw competition, landing 17 out of 18 shots in 1990, and 18 of 18 shots in 2002 and 2003.

Trexler-Campbell is already making plans to attend the national championship in Albuquerque, New Mexico, this year for table tennis, making her what many other senior game players call “an inspiration.”

“I’m doing this hoping I can live as long as Hazel,” said Newsome-Potter.

Salisbury photographers, artists to be featured in April 26…