Salisbury photographers, artists to be featured in April 26 show in Davidson 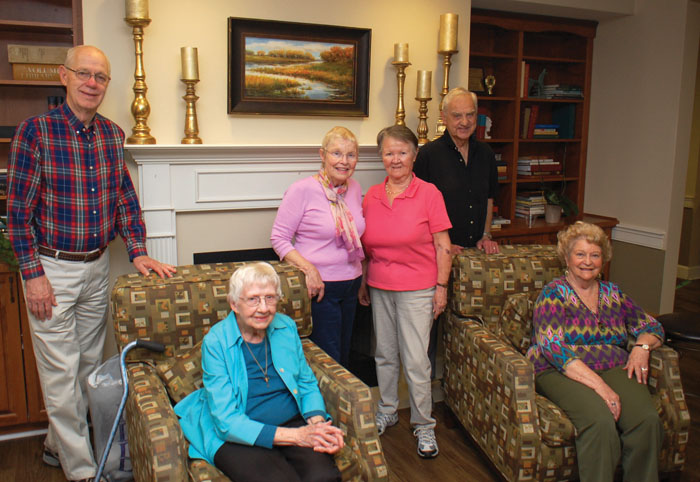 Mark Wineka/Salisbury Post These Salisbury photographers and artists will be part of an 'April is for Arts Gallery Crawl' in Davidson April 26 at the Homewood Suites by Hilton. They posed for this photograph Tuesday at Trinity Oaks and include, from left, Dick Snell, Gerry Webster, Nancy Gavitt, Uta Braun, Russ Gavitt and Marilyn Clifford.

SALISBURY — Uta Braun, who is 81 now, started painting only four years ago.

Braun came to look on veteran painter Gerry Webster as her mentor of sorts. Participants in the class usually line up some of the artwork they’ve been working on, then give constructive criticism to each other.

“In the end, we all listen to what she has to say,” Braun says of Webster.

Salisbury painters Braun, Webster and Marilyn Clifford, along with photographers Russ and Nancy Gavitt and Dick Snell will be among the 10 artists being featured in the “April is for Arts Gallery Crawl” in Davidson.

This ninth annual event will be held from 6-9 p.m. April 26 (a Friday evening) at the Homewood Suites by Hilton Lodge, 125 Harbour Place Drive.

Clifford, Braun, Webster and Snell will be making their first appearances. The Gavitts have displayed their photography in all eight shows at the hotel in the past.

All of these Salisbury painters and photographers are Trinity Oaks residents, except for Webster.

This particular gallery crawl at Homewood Suites was pretty much Russ’ idea from the start. He and Nancy were residents of Davidson for 23 years before moving to Trinity Oaks.

When the Homewood Suites by Hilton opened 10 years ago, Russ met the sales director, showed the hotel examples of his and Nancy’s photography, and it immediately wanted to display the local works.

They have about 45 framed pieces on display.

“We’ve been honored to be on the walls for 10 years,” Russ says. “They loved the photography, and we have sold a fair amount right off the walls.”

His idea for the annual show soon followed, and he’s pleased to have his fellow Trinity Oaks residents and Webster as part of it this year.

Other artists joining the Salisbury group for the April 26 show, which also features live music and light hors d’oeuvres and desserts, are Julie Choi, a fine art silver jewelry maker; Peter Gendle, a master woodcarver; and Jamie and Donna Policz, who are home furnishing woodworkers.

“It’s going to be a fun evening,” Gavitt says, and he encourages everyone to attend. “… This is the big event in Davidson relative to the arts. I just think it’s a wonderful opportunity for the community to come together.”

The music at Homewood Suites by Hilton will be provided by Randall and Jayne Sprinkle.

The experience among the Salisbury participants varies widely. Webster has been painting, for example, since 1966. Snell says he has probably been serious about photography as a pastime for seven years.

Clifford, who does watercolors, craft jewelry and nature art cards, says she has been consumed with art “all my life practically,” but she became more serious about 25 years ago when she was living in Florida.

She’s a veteran of many art shows.

The Gavitts’ photography focuses a lot on nature and landscapes. They are both members of the Carolina Nature Photographers Association. Nancy has been wielding her camera seriously for at least 20 years; Russ, for 40 years.

Russ Gavitt’s background is in sales and marketing with companies such as Liberty Mutual, Sperry Rand and 3M. With 3M, Gavitt was marketing director to the Air Force and NASA.

The Gavitts also had a long association — Russ for 60 years — with Scouting. Nancy has been a homemaker, dental assistant, Scout director and longtime volunteer in many capacities.

Braun used to be a pharmaceutical buyer in California for two major hospitals.

“Basically, a legal drug dealer,” she says with a chuckle.

Snell forged a 20-year career in the Air Force, then another 20-year career with a defense contractor. He sometimes applies his engineering background to some of his more abstract photography.

Webster paints regularly, devoting a work space at home to her art. Her employment background is as a graphic artist and onetime operator of a bed-and-breakfast. She says she has been pretty much self taught, having attended some classes through the years but never a formal art education.

Braun says she eventually might try her hand at oil painting, and she wants to give plein air classes a chance this summer. She likes the idea of spreading out beyond her small apartment.

What does painting mean to her?

“It’s very peaceful,” Braun says. “Some people sit in front of a computer and surf the internet. (But with painting), I find it relaxing.”

Sole patch: Need a shoe repair? Weddington is the…