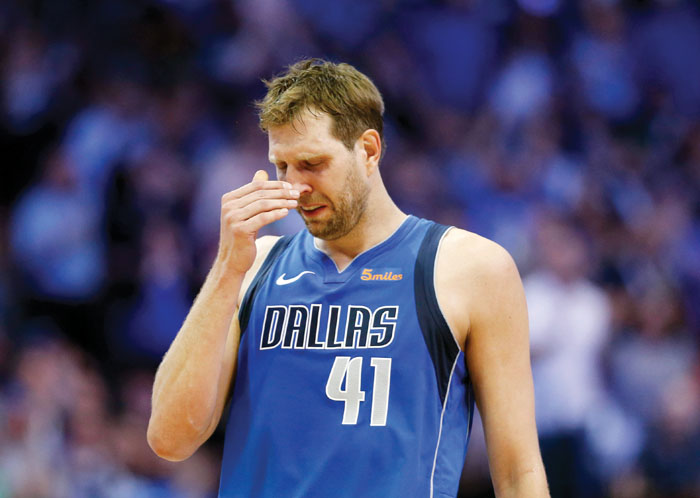 Dallas Mavericks forward Dirk Nowitzki gets emotional after a video played during a break in the first half of the team's NBA basketball game against the Phoenix Suns in Dallas on Tuesday, April 9, 2019. (Vernon Bryant/The Dallas Morning News via AP)

By SCHUYLER DIXON AP Sports Writer
DALLAS (AP) — Dallas Mavericks star Dirk Nowitzki announced his retirement from the NBA after a record 21 seasons with the same franchise, giving the fans the secret he had kept all season after scoring 30 points in his final home game, a 120-109 win over the Phoenix Suns on Tuesday night.
The 40-year-old showed his emotion during the game, fighting back tears just before action resumed at the start of the second quarter following a tribute video that detailed his holiday visit to a children’s hospital.
Nowitzki’s final basket in Dallas was his signature one-legged fadeaway from slightly above the free throw line for a 120-108 lead with 1:22 remaining after the Mavericks had let a 30-point halftime cushion get cut to four in the fourth quarter.
After speeches from Larry Bird and others he idolized growing up in Germany, Nowitzki told the crowd, “As you guys might expect, this is my last home game.”
The sellout crowd that followed owner Mark Cuban’s orders by showing up early chanted “M-V-P” and “One more year” throughout the game. But after he made the announcement, the chant turned to “Thank you, Dirk” as Cuban started to speak.
The 14-time All-Star has one game remaining, Dallas’ season finale at San Antonio on Wednesday night.
“This is obviously super, super emotional,” Nowitzki said. “Just too many people to really thank. I put you guys on a helluva ride with a lot of ups and downs, and you guys always stuck with me and supported me, so I appreciate it.”
Larger-than-life placards of Nowitzki’s face were perched on most of the roughly 20,000 seats at American Airlines Center, and a huge mural hung over one of the entrances to the arena.
Nowitzki, a few steps slower than in his prime and a role player on a team now led by rookie sensation and fellow European Luka Doncic, was serenaded in every road arena like it was a farewell tour.
Last month, he gave the home folks the thrill of passing Wilt Chamberlain to regain sixth on the career scoring list. Nowitzki reached that spot last season, but LeBron James passed him. Nowitzki, who led the Mavericks to their only championship in 2011, has 31,540 points with one game left.
The NBA’s highest-scoring foreign-born player broke Kobe Bryant’s record of 20 seasons with the same franchise, although it took longer than expected because of setbacks following ankle surgery that sidelined Nowitzki for the first 26 games. Bryant retired from the Lakers three years ago.
___
More AP NBA: https://apnews.com/tag/NBA and https://twitter.com/AP_Sports