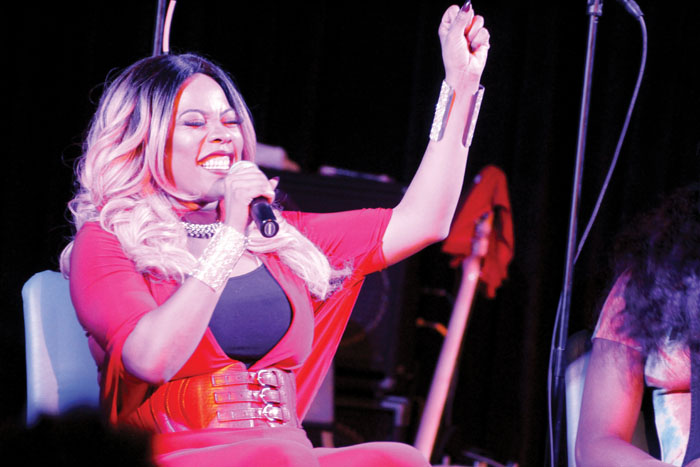 For Bravo TV star Brooklyn Tankard, being free is all about individual purpose: “It means living out your God-ordained purpose and not allowing any challenges to block you or stop you from pursuing that.”

The “Thicker than Water” reality show regular is now working to instill this freedom in college students and communities across American with the 2019 “I Am Free Concert and Convo Tour.” Stop one? Salisbury’s own Livingstone College.

The two-day event of workshops and meet-and-greets culminated Tuesday evening with a concert featuring live music, panels, dance and spoken word. Its purpose, according to event coordinators, was to “help people to prevent and heal from violence while becoming the best versions of themselves.”

Addressing attendees of Tuesday’s concert, Brooklyn shared her journey out of what she called internal and external violence. Externally, she said she had been subject to sexual, physical and mental abuse from the age of nine.

This external victimization led her into a pattern of internal hurt, she said.

“What I was thinking continued to be what I became,” she said. “I became more dysfunctional, and a spirit of perversion hung over me.”

By 18 years old, Brooklyn said she was caught up in a world of prostitution.

Hitting rock bottom, she returned home “like a prodigal child,” she said, and she began to rekindle her lost Christian faith.

“God can clean up any situation, but you have to listen,” she said. “… Like I was in a furnace, God was refining me. But pressure is necessary to make a diamond.”

This pressure formed her into a motivational speaker, an entrepreneur, a singer and more.

Brooklyn was joined during Tuesday’s performance by her father, award-winning gospel and jazz instrumentalist Ben Tankard, and her stepmother Jewel Tankard.

Each shared similar stories of faith and owning one’s own destiny.

For Ben, life had led him away from music and toward pursuing a career in professional basketball. An injury would cut his athletic career short.

“Sometimes something has to die in your life before you see your true destiny,” Ben said.

Poverty-stricken and depressed, Ben said he ventured into a church for a free meal.

“I went in to get chicken sandwich and ended up getting saved,” he said, adding that it was through church that he discovered his talent at the piano — a talent that would to 21 gold and platinum albums, multiple vacation homes, nine cars and two airplanes.

“I was seeking the money,” Ben said, “but God had other things in store for me.”

Brooklyn agreed, saying that God had left within her another sort of freedom: a freedom to chose happiness.

“Freedom is being in the middle of a storm with a smile,” she said. “… Life will humble you and God will humble you, but He’ll put you right where you need to be. …

“Don’t wait util you get where you’re going to be happy, being free means you have that happiness right now.”