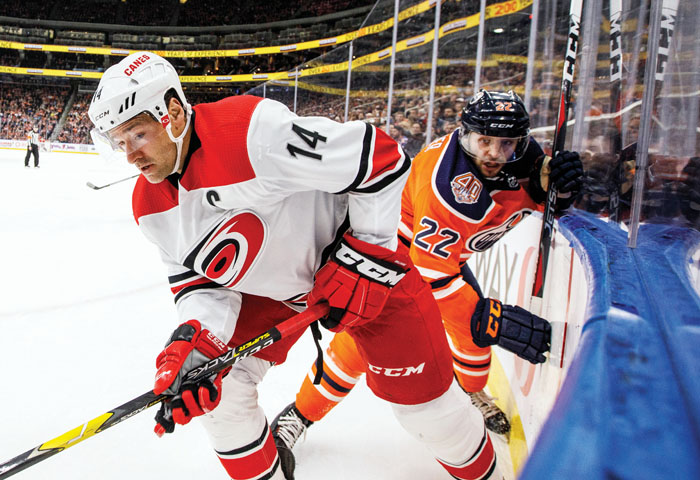 FILE - In this Jan. 20, 2019, file photo, Carolina Hurricanes' Justin Williams (14) and Edmonton Oilers' Tobias Rieder (22) battle for the puck during the first period of an NHL hockey game in Edmonton, Alberta. The Hurricanes have done plenty of unusual things this season, and here is one more: They are preparing for their first playoff series in a decade. (Jason Franson/The Canadian Press via AP)

RALEIGH (AP) — They traded punches with Evander Holyfield. They dunked a basketball on ice. They flopped around like beached whales.

The Carolina Hurricanes have done plenty of unusual things this season, and here is one more: They are preparing for their first playoff series in a decade.

That team dubbed a “bunch of jerks” over their wild, choreographed post-victory celebrations hopes to surge — or, perhaps more fittingly, Storm Surge — all the way to the Stanley Cup.

The Hurricanes, who open their first best-of-seven playoff series since 2009 on Thursday night at defending Cup champion Washington, are walking the fine line between savoring their rare-for-them accomplishment while not being completely satisfied with just making the field of 16.

“You never know when you’re going to be back in this situation,” 37-year-old captain Justin Williams said, “because making the playoffs is hard — as people in this area know.”

Oh, do they know.

It has been nine seasons since the Hurricanes last skated in a springtime game that mattered. Only two franchises have gone longer between postseason appearances — the Florida Panthers from 2001-11 and the Edmonton Oilers from 2007-16, with each missing the playoffs for 10 straight seasons.

“We’re certainly expecting more — this isn’t what we signed up for,” he said. “We all understand it’s a huge task, but we’re not going into this series not expecting to win, that’s for sure.”

The only current Carolina player who was on the ice for the Hurricanes’ last postseason series was center Jordan Staal — who at the time played for Pittsburgh, which swept those Hurricanes in the Eastern Conference finals.

To finally end that drought, Carolina changed just about everything, from the players on the ice all the way up to the team owner. Tom Dundon bought a majority stake in the team from longtime owner Peter Karmanos Jr. last January, then promoted Don Waddell to general manager and hired Brind’Amour — who, as captain of the title-winning team in 2006, was the first player to hoist the Stanley Cup — as head coach.

Along the way, the team’s culture changed. Williams was selected as team captain after a failed experiment last year in which Staal and Justin Faulk shared the captaincy, and the players became more accountable to each other.

They’re also having more fun after games, thanks to those Storm Surges.

Each one started with a slow, exaggerated overhead clap and ended with a different skit or activity. They celebrated March Madness by bringing a portable basketball hoop onto the ice and Trevor van Riemsdyk threw down a one-handed dunk . When Holyfield visited as a guest, they brought him onto the ice and the former boxing champ pretended to spar with Jordan Martinook. They marked Hartford Whalers night by flopping around on the ice like whales.

And when veteran hockey broadcaster Don Cherry ripped the celebrations and called the Hurricanes a “bunch of jerks,” they turned the insult into a rallying cry — even selling T-shirts with the slogan at the team shop.

Even as Williams announced the team’s decision to halt the Surges late in the season, he left the door open for their return by calling them “unpredictable.”

So was this playoff appearance. Just a few months ago, the Hurricanes were 15-17-5 on Dec. 30 and one point out of last place in the East.

“A lot of people that didn’t watch our team all year, they were, ‘What happened?’ and I don’t know that anything happened,” Brind’Amour said. “The puck just started to go in. I still think the first 25 games were the best segment of our season, and yet our record didn’t show it, so what do I know? … I can’t tell you the change. When pucks started going in, I think you could see they had a little bit more swagger.”

So now, on a day usually reserved for melting the ice at PNC Arena, they were doing something different to it — placing the playoff logos inside the blue lines.

For Williams, who scored the winning goal in Game 7 of Carolina’s Cup run 13 years ago and came back before last season to try to bring the franchise back to those heights, it’s particularly satisfying.

“I think the atmosphere’s going to be electric,” Williams said. “Still to this day, (Game 7 was) one of the loudest buildings I’ve ever been a part of. And playoff hockey coming back to the area, people are going to be ready. I know that.”