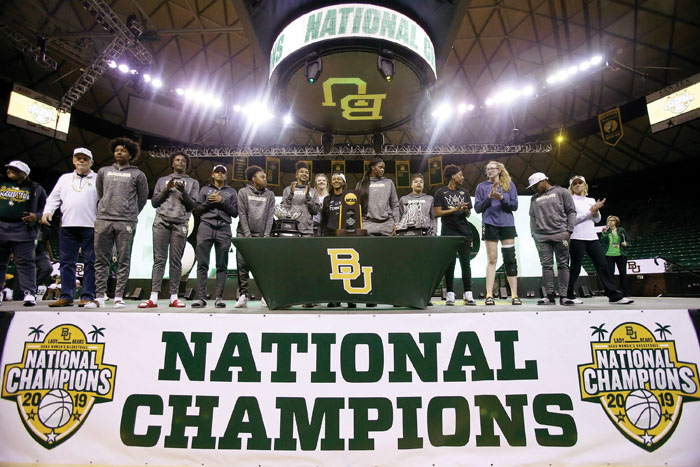 WACO, Texas (AP) — Kim Mulkey and Baylor might not have to wait another seven years to win another national championship.

The Lady Bears have already gotten some good news looking ahead to Mulkey’s 20th season as their head coach, with word Monday night that senior-to-be Lauren Cox won’t need surgery after a gruesome-looking left knee injury the 6-foot-4 standout post sustained in the national title game.

They also have those talented youngsters known as the “Fierce Five” — Baylor’s 2018 top-ranked signing class, a group of five five-star recruits who as freshmen were part of a championship season.

“Those kids will get us back here,” Mulkey said only moments after Baylor’s 82-81 title-clinching win over Notre Dame . “I promise you that.”

Baylor’s third championship came seven years after its 40-0 title run in 2012, which was seven years after the Lady Bears won their first in 2005. They also made the Final Four in 2010 during Brittney Griner’s freshman season.

Kalani Brown, the 6-7 senior center who was a three-time unanimous All-Big 12 pick, reached her biggest goal in her final game by winning the national championship. So did Chloe Jackson, Baylor’s first-ever graduate transfer, who came from LSU for the chance at a title and became the most outstanding player of the Final Four with go-ahead baskets in both the national semifinal and championship games.

The Lady Bears (37-1), who won their last 29 games, return everyone else next season.

“The future is bright, the sky’s the limit for this group,” Jackson said. “We have an amazing freshman class. … They’re going to be great for years to come.”

Cox, a key leader for this title team, got hurt late in the third quarter Sunday night. Baylor led Notre Dame by 12 when she crumpled to the floor, then was taken off the court in a wheelchair. She wore a huge brace and used crutches when she returned to the bench with her teammates for the end of the game.

When Baylor got home from Florida on Monday, and went directly to their home arena for a celebration with their fans, Cox still had the brace but walked without crutches out of the tunnel and up the stairs to the stage.

After that, Cox had an MRI and an examination that determined she suffered an MCL sprain with bone bruising and will not need surgery.

“Lauren is probably one of the best players I’ve ever played with. She’s probably my best teammate I’ve ever had,” DiDi Richards said. “It kind of feels like it’s impossible to lose when Lauren’s on your team.”

Richards, a junior-to-be defensive specialist, will be a returning starter along with the only seniors next season: Cox and reliable shooting guard Juicy Landrum. Guard Moon Ursin will be a junior, and Trinity Oliver will begin her third season as a sophomore after the guard suffered an ACL injury early in the 2017-18 season.

NaLyssa Smith, who led this season’s freshmen by playing 15 minutes and scoring 8.4 points a game, came in against Notre Dame after Cox got hurt. Smith finished with 14 points overall on 7-of-9 shooting in her 17 minutes, her 17th double-figure scoring game of the season.

The other members of the “Fierce Five” are guard Honesty Scott-Grayson and post players Queen Egbo, Aquira DeCosta and Caitlin Bickle.

“Coach Mulkey is a great coach and she’s not for the weak,” Brown said. “She pushed me for a reason, and I think that’s what all the young girls need to understand, that it’s not going to be handed to you. … I told them the same thing, I was sitting in your chair and look where we are now. I think they believe me now when I say you will get your chance.”