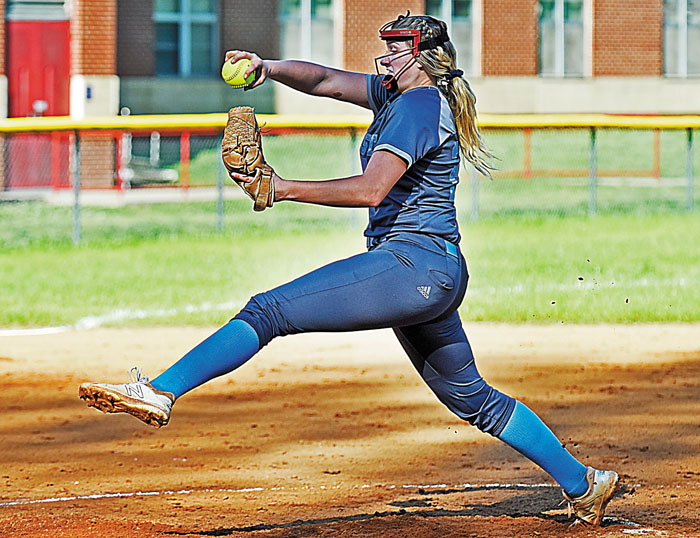 GRANITE QUARRY — There are no K’s in Whitley Arnott’s name, but there were 10 of them beside it in West Rowan’s scorebook here Wednesday night.

The junior right-hander used a sack-the-quarterback mentality in a commanding, one-hit shutout at East Rowan.

“I just try to laser-focus out there,” Arnott said, moments after NPC-leading West needed only six innings to record a 10-0 softball victory. “I wanted to get ahead in the count and get them to swing at pitches that weren’t strikes. It gave them fewer chances to hit balls square.”

The triumph lifted West (12-2, 7-0) a game-and-a-half ahead of second-place Carson with three league games remaining.

“This was a huge game,” said winning coach Jimmy Greene. “We had this one circled, because last year we came over here and got beat. We had five errors that day — and my seniors remember that. And East, they’re always a tough out at the end of the year. So we were taking this game seriously.”

The Falcons announced their intentions against losing pitcher Karley Teague in the top of the first inning. Two East errors, two walks and an adventurous fly ball that barely cleared the fence in left for a Hannah Roberts grand slam gave West a 4-0 head start. All four runs were unearned and the blast — Roberts’ first as a varsity player — came with two away.

“On a 3-2 count,” the senior infielder added. “I knew (Teague) had good speed, but I saw that ball right down the middle and went with it. She threw it perfectly.”

East coach Mike Waddell trimmed his comments to a nub after the Mustangs (8-4, 3-3) had a five-game winning streak snapped. “The ball carried,” he said. “It just happened. They threw the first punch and we never recovered.”

Roberts, who claims she’s been fighting a season-long slump, provided more insight. “My season’s been off the charts,” she said. “I’m not hitting like I normally do. But with the bases loaded and two outs, I knew I needed to get at least one runner in somehow. Honestly, I didn’t think it was going out. But rounding first base I looked up and saw it, and that was the best feeling in the world.”

Among the beneficiaries was Arnott, who used four distinct pitches to strike out the side in the first and second innings. She had eight punch-outs by the end of the third.

“It’s amazing,” she said. “As a pitcher, you get up 4-0 and it takes all the pressure off. All I had to do was go out there and focus. It was just me and the catcher, locating pitches that would benefit me and my team.”

Arnott yielded only a third-inning infield hit to Maddie Trexler, but seemed to falter over the last two innings when she issued three walks, hit a batter and uncorked a couple of wild pitches.

“Whitley does much better when she doesn’t try to strike people out,” Greene said. “When she just lets her pitches work — and lets the curve and the spin happen — she strikes people out. When she starts trying too hard, you’ll see my catcher reaching for balls. When she settles down, she’s an incredible pitcher.”

Teague persevered through two-plus innings and surrendered eight runs, half of them earned. The junior right-hander faced 17 batters, allowed six hits and walked four. She was chased after Arnott sliced a run-scoring double down the right-field line with none out in the third.

“She (Teague) struggled to hit her spots,” said Waddell. “And it didn’t help that we weren’t playing good defense behind her. It we make a couple of little plays, it’s a different ballgame.”

East reliever Haley Strange fared better, collecting six strikeouts in four innings. West made it 9-0 when catcher Megyn Spicer blooped a two-out single to center in the top of the fourth. The Falcons’ final run — also delivered by Spicer — crossed on a sixth-inning groundout.

“Scoring early, getting ahead early. That made all the difference,” Greene said afterward. “We’re a whole lot better when we play looser. We’re more comfortable and we have better at-bats. Even our strikeouts, they came on big cuts. When you’re ahead, you can afford to take those cuts.”

Roberts offered a simpler explanation. “We’re just keeping it smooth,” she said. “And going with the flow.”

NOTES: Half of Arnott’s strikeouts came on called strikes. She also went 2-for 4 at the plate. … Teammate KK Dowling contributed three singles and scored a run. The Falcons plated eight runs with two batters out. … East drew four walks, including two by outfielder Kaitlyn Samples. … The Mustangs host Carson at 5 p.m. today. Greene said West would try to reschedule Friday’s NPC game at North Iredell to today, due to weather concerns.