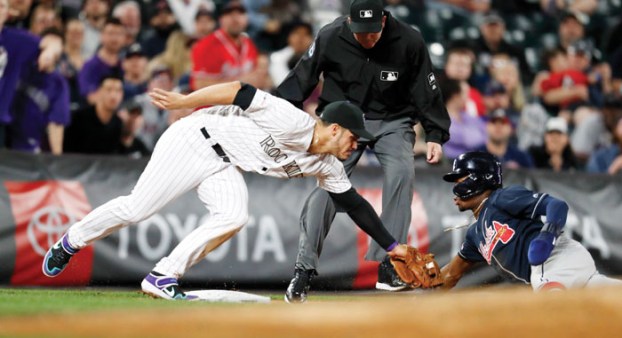 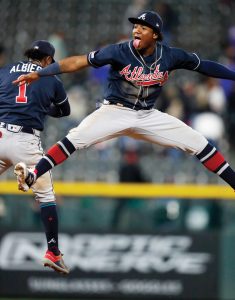 By MICHAEL KELLY Associated Press
DENVER (AP) — Freddie Freeman thought Max Fried was headed for a big season.
Looks like a solid prediction so far.
Fried pitched six effective innings to lead the Atlanta Braves to a 7-1 victory over the Colorado Rockies on Tuesday night.
“I told you guys in spring training. I love the guy. That left arm, those kinds of special talents don’t come around,” Freeman said. “He’s been off to a great start. Pitching like that here in Coors Field, it’s a big job and I thought he did fantastic.”
Dansby Swanson and Ronald Acuña Jr. homered for Atlanta. The Braves have won five of their last seven games in Denver after dropping 11 straight at Coors Field.
Fried (2-0) took a no-hitter into the sixth inning against the Chicago Cubs on Thursday and carried that momentum into the matchup with Colorado. The left-hander allowed an unearned run and five hits.
“In the bullpen I noticed all my pitches were breaking about the same as they normally did so I wanted to go out there with the same approach,” Fried said. “Attack them, try to get ahead, throw some curveballs, some sliders and some changeups and keep them off balance.”
In four games, two starts, Fried has yet to allow an earned run in 13 2/3 innings.
“He was really solid, very aggressive,” Atlanta manager Brian Snitker said. “Good, solid outing by him.”
Colorado has dropped its first five home games. It has lost nine of 10 overall since winning the first two games of the season.
German Márquez (1-1) has been the Rockies’ best starter so far, and he was rewarded with a new contract Saturday that runs through the 2023 season. He entered with a 0.69 ERA but allowed more runs in the fourth inning (four) than he had in his first two starts combined.
“I made a couple of bad pitches,” Márquez said. “I won’t have a carryover to my next start.”
Acuña went deep on the first pitch of the second. Freeman singled in Josh Donaldson in the fourth before Swanson hit a drive to center for a three-run homer.
Acuña also homered during Monday’s 8-6 victory over the Rockies.
Ian Desmond hit an RBI single in the fourth for Colorado.
TRAINER’S ROOM
Braves: RHP Mike Foltynewicz (bone spur) could return to the rotation this weekend. Foltynewicz pitched 3 2/3 innings in a rehab start with Triple-A Gwinnett. “We will test him again tomorrow and make a decision,” Snitker said. “He could start in five games.”
Rockies: OF David Dahl was placed on the 10-day injured list with a left-side core injury. He got hurt in his first at-bat Sunday night against the Dodgers. OF Yonathan Daza was recalled from Triple-A Albuquerque and made his major league debut in right field.
MILE HIGH MEMORY
Tuesday marked the 26th anniversary of Colorado’s first home game. The Rockies beat the Montreal Expos 11-4 that afternoon, with Eric Young homering in the first in front of a crowd of 80,227.
Young, whose son, Eric Young Jr., also played for the Rockies, is now the first base coach for the Braves.
FLASHING THE LEATHER
Freeman helped Fried get out of a jam in the third. After Tony Wolters doubled and Marquez reached on a bunt single, Freeman’s leaping catch of Daza’s line drive led to a double play.
Fried then struck out Raimel Tapia to end the inning.
“It’s incredible,” Fried said of Atlanta’s defense. “Some of these plays being made behind me only makes me want to just put the ball in play more.”
UP NEXT
Braves: RHP Kevin Gausman (1-0, 0.00) allowed just two hits over seven innings in his first start of the season against Miami.
Rockies: RHP Jeff Hoffman will be recalled to make his first start of the season in place of LHP Tyler Anderson (left knee inflammation).