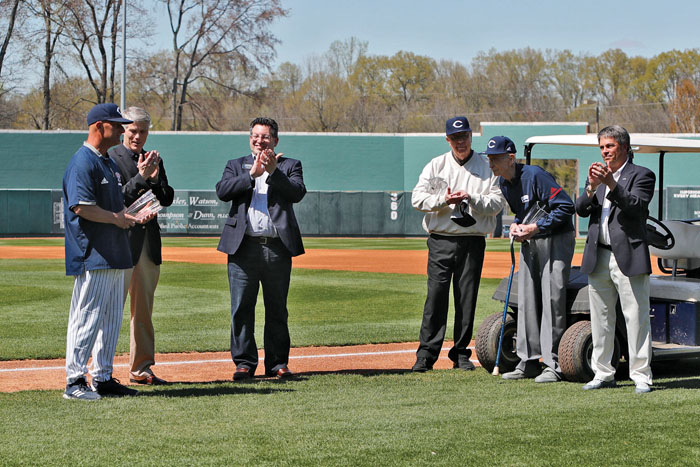 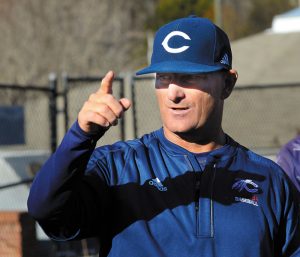 Coach Jim Gantt. With the 60 degree weather and the start of a new season just weeks away, the Catawba baseball players took to the field on Tuesday doing conditionings and keeping muscles lose by running short sprints. . photo by Wayne Hinshaw, for the Salisbury Post

SALISBURY — Rita Hunsucker was walking out of the Catawba College cafeteria one day in the mid-1960s.

“Well, I knew right away,” Maye said. “It only took one look for me, but I admit it did take a little while to sell her on it.”

Had Rita chosen to dine elsewhere on that fateful day, sports history in North Carolina may have traveled a different path.

Their son, Mark, would become a star quarterback for the UNC Tar Heels in the 1980s.

Mark’s sons, in turn, are outstanding athletes. UNC basketball All-American Luke Maye made the last-second shot against Kentucky in the 2017 South Region final to send the Tar Heels to the Final Four, and eventually the NCAA championship. Drake Maye, a sophomore at Myers Park High in Charlotte, might end of being the most famous Maye of all. He already has offers to play quarterback from all over the country, including Alabama and Ohio State.

Needless to say, Jerry Maye, 76,  feels lucky and fortunate and blessed. He smiles a lot. He laughs a lot.

“My life has worked out wonderfully,” he said. “Everything good that happened, it all goes back to Catawba.” 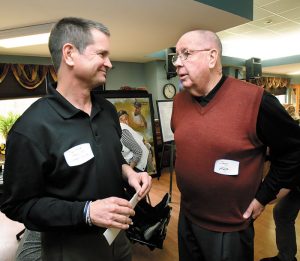 Former legion player form 1980-82, Tim Kirk and Jerry Maye who was a Catawba pitcher in the early 1960’s. . photo by Wayne Hinshaw, for the Salisbury Post

Catawba’s baseball program saluted a couple of its Hall of Fame hurlers on Saturday before they swept a doubleheader at Newman Park against Queens. They received new blue caps — and a round of applause.

Jack Taylor, 91, Class of 1948, a hurling hero who married Catawba graduate Jackie Bost, rode a golf cart to the mound and took a bow. Then Maye, who whipped blazing lefty fastballs for the Indians from 1962-65, heard the roars of the crowd one more time. Then the Indians honored Jim Gantt, who boosted his victory total with the program to 820 on Saturday.

“What a jewel Catawba has in Coach Gantt and this team,” Maye said. “I can’t tell you how good that made me feel, having all those great young men smiling at me and congratulating me on my career here.”

When Maye finished college ball with the Indians in 1965, he owned just about every Catawba pitching record — except for career ERA. Taylor still owns that one — 1.74.

There was a game in mid-March, 1965, in which Catawba played at Western Carolina and Maye whiffed a school-record 18 Catamounts in 10 innings. That strikeout mark still stands, but that’s not his favorite memory.  Catawba lost that game, 5-4, despite Maye’s heroics.

“My best memory at Newman Park was pitching and winning both games of a doubleheader against Pfeiffer,” Maye said. “I only had to pitch seven innings in the first game, so I was asked if I could start the second game. We were ahead after four innings, and they asked if I could keep going. So I did.”

“He just called to tell me he loved me,” Maye said, blinking back a few tears. “He remembers everything. Just a great man.”

Maye obviously gets asked about his grandchildren a lot, especially Luke, because UNC basketball fans are numerous and devoted.  He wanted to clarify Luke’s status as a walk-on at UNC.

“Luke was a really good player in high school (at Hough) and had scholarship offers from Gonzaga, Virginia, Notre Dame and a lot more,” Maye said. “But he was raised in a UNC household and wanted to go to UNC. Coach (Roy) Williams didn’t have any scholarships left Luke’s senior year, so he asked to come as a preferred walk-on and promised him that the first scholarship that became available would be his. I told him to turn it down, that he was too good to go anywhere as a walk-on, but a scholarship did become available that spring and he went to UNC as a scholarship player. All he wanted was an opportunity, and I would say he made the most of the opportunity when he got it. Coach Williams used him perfectly, as a power forward who could play away from the basket, and he loves Coach Williams.”

Maye’s most enduring mark at Catawba is his 33 career complete games. No one will ever approach that record because the game has changed. Starting pitchers get slapped on the back now if they can go five innings and give their team a chance. When Maye took the ball, he fully expected to finish what he started.

“We played at Newman Park same as they do now, but we just didn’t get to play nearly as many games back then,” Taylor said.

After Catawba, Taylor put together a remarkable record in minor league baseball. Between 1947 and 1961, he pitched in 452 professional games. He lost two important years to military service as a combat engineer, but he still won 182 games.

His greatest year was 1956 when he won 22 games in the Carolina League for the High Point-Thomasville Hi-Toms. One of the 21 homers he allowed that season was launched by a young Danville Leafs slugger named Willie McCovey.

A successful businessman during and after his baseball days and a Little League coach for decades, Taylor made his mark in a lot of ways.

“I still get out to Catawba every chance I get to watch baseball,” Taylor said. “Especially when the weather is nice like today.” 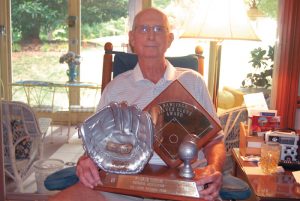 Maye’s minor league career was much briefer than Taylor. As a 22-year-old, he turned in a terrific 1965 season in the Minnesota Twins organization (8-3, 1.94 ERA), but he was injured in 1966 while batting, when he was struck by a pitch on the shoulder, on a bunt attempt. He was pitching that season for Thomasville.

“I probably could’ve kept pitching another few years, but I had a family to think about, and it was time to move on and go to work,” Maye said. “I took a job with Proctor & Gamble and was with them for 32 years before I retired. But none of that happens without that education I got at Catawba.”

Maye now lives in Conover, which is known to golfers for Rock Barn Country Club and Spa.

Maye walked out to the field at Newman Park on Saturday sporting a light blue Rock Barn cap, but when he returned to the bleachers his head was covered by the familiar “C” of the Catawba Indians.