New round of sculptures installed across Salisbury 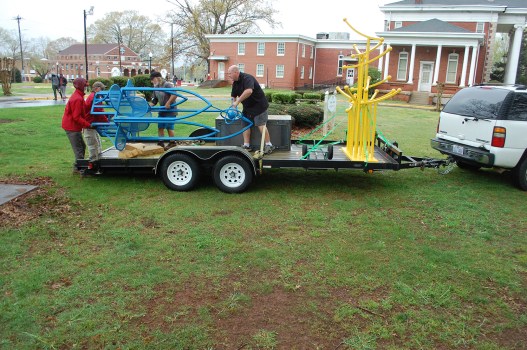 Adam Walls moves “Nave” with the help of Randy Goodman and Jack Goodman at Livingstone College on April 5. 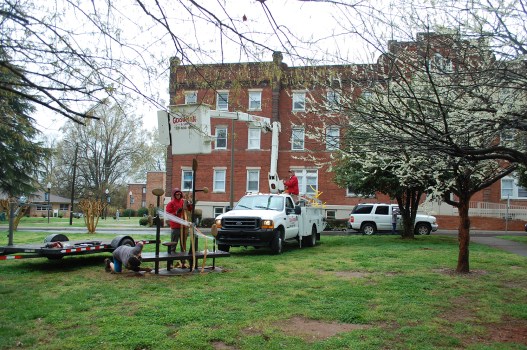 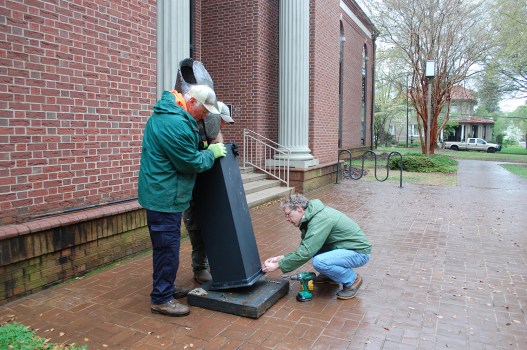 Roger Martin installs his sculpture “Sanctuary” at Rowan Public Library with the help of city staff on April 5.

SALISBURY — Through rain and mud, new pieces of art were installed for this year’s Salisbury Sculpture Show on April 5.

In its 11th year, the show features nine artists with 16 pieces scattered across the city at three colleges, Novant Health Rowan Medical Center and in the West End neighborhood.

“The Sculpture Show makes art accessible for everyone,” said Alyssa Nelson, urban design planner. “It’s available 24/7 by being outside.”

Charles Pilkey installed his piece “Mesozoic Bench” at Livingstone College. He challenged himself to make the sculpture functional — students, faculty and visitors can sit on the metal platform.

He said he enjoys participating in the sculpture show because it allows everyone to see it, unlike a museum.

“It’s an education for your community who otherwise would not get the chance to see modern art,” Pilkey said.

Randy Goodman, a contractor with June Goodman and Sons, has aided with the installation every year. He spends weeks preparing for the artists placing their pieces throughout the community.

He is one of the first to see the various sculptures. He likes seeing the difference of the pieces and learning the stories behind them.

For Pilkey, his sculptures either showcase environmental and social issues or something that is more relaxing and playful. He hopes his sculptures start a conversation.

“My position on public art is it should, at least some of the time, address these issues,” he said. “It should not be just entertaining, just fun, decorating the sides of buildings or landscapes.”

Nelson said for one of the sculptures, the symbolism helped its selection. West End received a piece named “Community.” West End is the first neighborhood to have a sculpture.

Pilkey enjoys the contrast of the city’s historic qualities to the sculptures.

“It works well in a traditional town like this with the history and so forth to have modern art with a backdrop of traditional architecture,” he said.

The Salisbury Sculpture Show costs $30,000, with $10,00 coming from the city. Other funds come from grants or hosting sites paying the stipend.