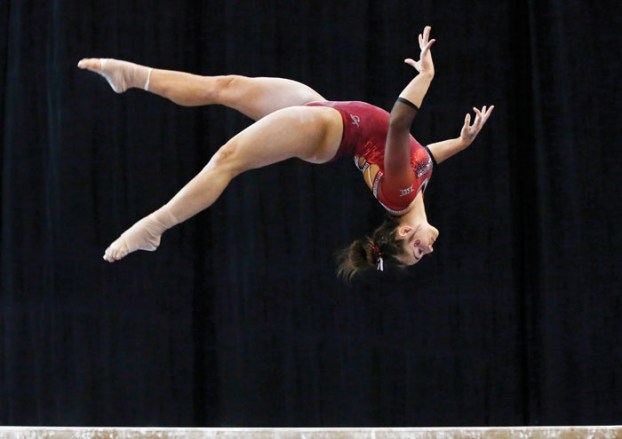 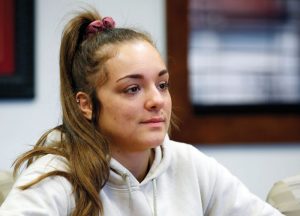 Oklahoma gymnast Maggie Nichols answers questions during an interview in Norman, Okla., Tuesday, Feb. 19, 2019. Nichols is Athlete A, the first person to tell USA Gymnastics that sports doctor Larry Nassar was sexually abusing her. Nichols wants to let it be known that though the culture of sport at its highest levels hurt her, gymnastics also has helped her heal. (AP Photo/Sue Ogrocki)

NORMAN, Okla. (AP) — For all the work Maggie Nichols has put into becoming a world-class gymnast, some of her most important moments in the sport these days are coming off the mat.

Like sitting at a long table at the Cox Convention Center in Oklahoma City, welcoming a steady stream of children and their equally star-struck parents seeking autographs. As a meet continued just a few feet away, she signed away, marker gripped in her left hand. Smiling and engaging with each child, she held out hope that, in those brief moments, she could convey her deep love of a sport that has brought her both great triumph and great pain.

Nichols is a superstar athlete for gymnastics power Oklahoma with four NCAA titles in hand, including the all-around title last year. To the tens of thousands of fans who follow her on social media, she is a consistently positive, ebullient personality with a touch of sass. Mags Got Swag , after all.

Nichols is also Athlete A, the first person to tell USA Gymnastics that sports doctor Larry Nassar was sexually abusing her. The scandal that followed has rocked the sport and the U.S. Olympic movement to its core, with hundreds of girls and women somehow trying to move on with their lives as survivors — including Nichols, a Minnesota native who is a junior for the Sooners.

She knows the sport is reeling.

It is also important to her that the sport survives.

It is why it means so much to her to leave a positive impression in those brief moments with children, especially the girls. And why she feels it’s important to somehow disconnect the scandal from the sport itself.

“For me, gymnastics is such a beautiful sport, and it brings so much joy and it’s taught me so many amazing things and has given me so many amazing opportunities,” Nichols said. “So they are definitely two separate things for me.”

Nichols wants to let it be known that though the culture of sport at its highest levels hurt her, gymnastics also has helped her heal.

“I feel like gymnastics and being able to practice and compete has been a little bit of a — gets me away from all of the bad stuff that’s happened,” she said. “I still love the sport of gymnastics.”

Nichols is one of several high-profile Nassar survivors determined to help propel the sport forward through advocacy, education and compassion. Good friend and reigning Olympic champion Simone Biles won her fifth national title last summer wearing a teal leotard, the color designated for survivors of sexual abuse. Six-time Olympic medalist Aly Raisman started the “Flip the Switch” program designed to teach adults how to protect young athletes from predators. While all have expressed deep concern with how USA Gymnastics allowed Nassar’s behavior to run unchecked for years, they, like Nichols, have taken great pains to make sure people don’t confuse missteps by the organization with the sport itself.

Gina Nichols, herself struggling to deal with the fallout, has been empowered by the way her daughter has handled it all.

“No matter what, she’s never said — and a lot of rotten things have happened to her — like, woe is me or I feel sorry for myself. She’s never once, ever since I had her, ever felt sorry for herself for anything,” Gina Nichols said. “She always stays that way, no matter what happens to her.”

Pastor Adam Starling of Victory Family Church in Norman said Nichols’ outlook in the face of challenges is rare, especially for someone so young.

“She has strength, wisdom and courage well beyond her years,” he said. “I don’t think she’s able to do this without God walking with her. To be able to go through something that’s unthinkable for anyone at such a young age and be drawn into the spotlight — I think, is a tremendous amount of pressure that very few people on the planet can relate to in any way. But I think she handled it with character, with courage, with dignity.”

Nichols wasn’t always sure that speaking out was a good idea. She actually planned to come forward a month before she did, but when the day came, she told Oklahoma coach K.J. Kindler she wasn’t ready. She finally made it known in January 2018.

“There was a lot of things that were crossing my mind before I came forward,” Nichols said. “If it would hinder any chances with my gymnastics. Also competing in gymnastics — would it change anything like that. Also things like, would people treat me different, would people look at me the wrong way, stuff like that. After I came forward, I was awfully nervous about that kind of stuff. The feedback and the responses I got were so positive. I had so many people behind me and supporting me. It was the right decision for me. I made the right decision.”

Her support system, including her church, her teammates and her family, helped her move forward. Kindler said Nichols has come a long way.

“She’s really opened up and, I think, embraced her platform and her ability to affect people positively and make an impact on young people everywhere — not just those who are going through troubled times and things of that nature, but we all have things that we struggle with,” Kindler said.

Starling said he is especially impressed with how intentional Nichols is about taking a negative situation and becoming a light to others through it.

“I think people throw around the word hero pretty easily, but I think she probably epitomizes that word because of how she’s handled it, and also how she’s been an example to everybody else that’s conquered something similar,” he said.

Nichols may have more to conquer soon. Injury derailed her last Olympic bid, and she doesn’t know if she will try to make it in 2020.

“That would be amazing if I would be able to try out for another Olympics,” she said. “That would be so fun, but I’m kind of focusing on college gymnastics right now and kind of enjoying that part of my life right now.”

She has just one more year at Oklahoma, which is the top seed in this year’s NCAA Championship. So while the spotlight shines most brightly, she has a limited window to make the most of her platform.

AP Sports Writer Will Graves contributed to this report.

BRISTOL, Tenn. (AP) — Tyler Reddick had his own “Hello, Dolly” moment when he saw his pink and white race... read more