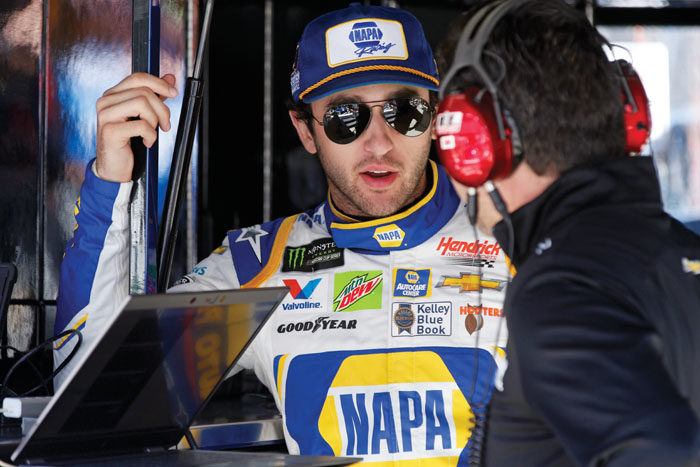 Chase Elliott is not far off the cut line in the NASCAR playoffs. (AP File Photo/Wade Payne)

BRISTOL, Tenn. (AP) — Chase Elliott positioned himself to give Hendrick Motorsports a shot at its first victory of the season with a pole-winning run at Bristol Motor Speedway.

Elliott earned his first pole on a short track with a fast lap at 131.7132 mph Friday around the bullring to earn the fifth pole of his career. His previous four were at either Daytona or Talladega, the biggest and fastest tracks on the NASCAR circuit.

“I’ve really been wanting a pole outside of Daytona and Talladega for a long time now, so I feel like I was finally able to contribute from my end a little bit more and get a pole that my team certainly deserves,” Elliott said. “We have some work to do for Sunday and try to get it driving good for 500 laps.”

‘It’s awesome to be one-two for Hendrick Motorsports,” said Byron, who noted that he started second last week at Texas, too, alongside teammate Jimmie Johnson.

“I hate to be on the second end of it, but it’s still fun to start on the front row. I feel like we’re making huge strides in the speed of our cars and it just makes things easier at the track.”

Ryan Blaney qualified third in a Ford for Team Penske, followed by Joe Gibbs Racing teammates Erik Jones and Denny Hamlin in a pair of Toyotas.

Blaney set a track record in the second round of qualifying, but in the third round, when the starting order is set, Elliott had the faster car. He became the eighth different driver to win a pole through eight qualifying sessions this season as there has yet to be a repeat pole-winner.

Hendrick Motorsports, coming off one of the worst seasons in its storied history, has won three poles this season with Elliott, Byron and Jimmie Johnson. But the highest finish to date this season for the four-car stable was Elliott two weeks ago at Martinsville Speedway, where he finished second.

Elliott led 49 laps at the Virginia short track before fading against winner Brad Keselowski, but the showing at Martinsville coupled with the pole at Bristol has Elliott in position to get his first win of the season.

All seven races this year have been won by drivers from Joe Gibbs Racing (Toyota) and Team Penske (Ford) as the Chevrolet teams are still playing catch-up in the second-year Camaro.

NASCAR sent a memo to teams reminding them of a new media policy that requires every driver to visit a media bullpen following qualifying, and warned fines can be issued to drivers who skip the session or are “verbally aggressive to a NASCAR staff member or media member.”

Under the member conduct guidelines in NASCAR’s rule book it states a driver can be fined between $10,000 and $50,000 for various violations that include meeting media obligations.

Kurt Busch, a six-time Bristol winner who qualified 27th, took umbrage to his post-qualifying media obligations and repeated the same answer nearly verbatim to every question.