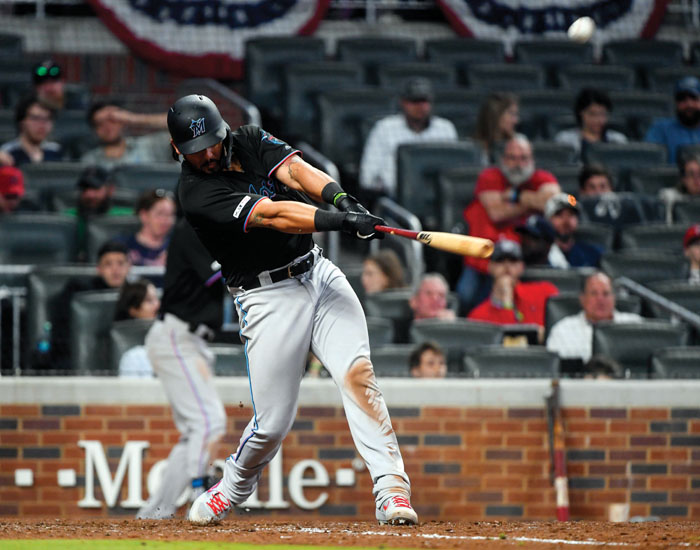 Alfaro, a right-handed hitter, homered to the opposite field on both swings. His first long ball came off Braves starter Kyle Wright and the second one off reliever A.J. Minter (0-1).

Sergio Romo (1-0) faced the minimum in the eighth, getting knocked down on Josh Donaldson’s pinch-hit liner but scrambling to throw him out, and retired Ozzie Albies on a fly ball in the ninth.

Adam Conley got two outs to earn his first save. He gave up a single to Freddie Freeman before striking out Ronald Acuna Jr. and working out of a bases-loaded jam on pinch-hitter Charlie Culberson’s popup.

The Braves, who went 1 for 13 with runners in scoring position, led 1-0 in the first after Freeman’s RBI double. Atlanta went up 2-0 in the fourth on Dansby Swanson’s RBI single. Miami tied it in the fifth on homers by Alfaro and Peter O’Brien.

Wright gave up five hits, two runs and one walk in six innings. He struck out four.

Marlins starter Sandy Alcantara allowed four hits and two runs in four innings. After walking none in a win against Colorado, the young right-hander issued five free passes in 93 pitches. He had no strikeouts after whiffing six in his season debut.

The Marlins had dropped nine straight at SunTrust Park. They improved to 5-16 at the Braves’ third-year home.

Braves: C Brian McCann left in the fourth with a right hamstring strain after a slide into third. … Manager Brian Snitker gave Donaldson a scheduled day off at third base. Injuries limited Donaldson, the 2015 AL MVP, to 113 games in 2017 and 52 last season. “We’re going to give him a break here and there,” Snitker said. “With this long stretch, I’m going to give a few guys a day off next week, but it was just more of today or tomorrow. He can get a left-handed matchup tomorrow.” … Acuna and Nick Markakis left six runners on. Albies left five.

Swanson made two impressive plays at shortstop. He caught a liner and threw out Alfaro, who was leading too far off first, to end the second. Swanson ended the third by catching a ball on a short hop that glanced off Wright and throwing out Curtis Granderson.

Snitker said Johan Camargo, in the lineup for Donaldson, will start again Sunday. Camargo, who went 0 for 3 with two walks, was the everyday third baseman last year and hit. .272 with 19 homers and 76 RBIs in 134 games, but was moved to a jack-of-all-trades role after Donaldson signed a one-year deal. Camargo, a switch-hitter, started in left field Wednesday against the Chicago Cubs.

ANAHEIM, Calif. (AP) — Mike Trout hit a grand slam for his fourth homer in three days, and Los Angeles beat Texas for its first back-to-back victories of the season.

Trout’s 458-foot blast in the fourth inning off Drew Smyly (0-1) cleared the bullpens beyond the left field fence at Angel Stadium. After homering in the Halos’ home opener Thursday and adding two more Friday, Trout delivered the biggest blow yet with his fifth career grand slam, his first since 2015.

Mike Leake (2-0) pitched 6 1/3 innings of two-run ball as the Mariners rebounded from a sloppy 10-8 loss in Chicago’s home opener.

The Tigers trailed 4-2 in the seventh but rallied against Kansas City’s struggling bullpen. Kevin McCarthy (0-1) allowed three hits and a hit batter.

With one out in the 10th, Francisco Cervelli singled off Raisel Iglesias (0-2). Newman drove the first pitch he saw to the 410-foot left-center notch at PNC Park, and Cervelli easily beat the relay home.

It was the first game-ending hit of Newman’s career.

Pittsburgh’s Francisco Liriano (1-0) struck out two in the top half of the inning.

Cincinnati star Joey Votto tied it in the eighth with his first home run of the year, a solo shot off Keone Kela. It was Kela’s second blown save in five appearances.

Steven Duggar had three RBIs and Joe Panik scored twice to help San Francisco snap a three-game losing streak behind a breakout day from its offense. Belt had an RBI single in the third and hit a two-run, opposite-field home run off Ryan Yarbrough (1-1) as part of a four-run fifth.

Travis Bergen (1-0) retired one batter in relief of starter Jeff Samardzija to earn his first career victory. Will Smith pitched the ninth for his third save.