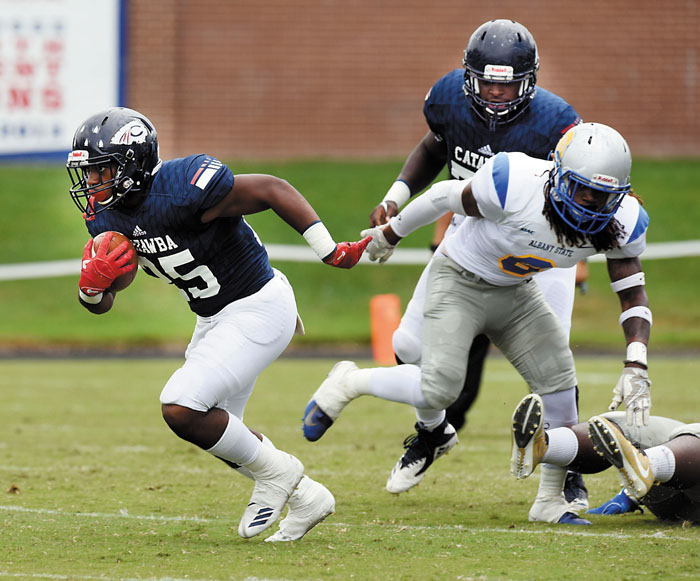 The Blue team (Offense) managed just one touchdown against the White team (defense). That was on the last play of the scrimmage when backup QB Kendall Davis flipped a pass to running back Demonte Good that set off all sorts of leaping, high-fiving, fist-pumping celebrations.

But don’t be misled.

“Our defense did have a good day today,” veteran linebacker L.J. Melvin said quietly. “But all spring, there’s been good balance, with the offense winning one day and then the defense coming back the next day. It’s been great competition that’s allowed us to make some huge strides as a team. This spring has been good for us.”

Catawba would love to play a traditional spring game like the big boys, with coaches choosing up sides and two teams going at it for bragging rights and steak dinners, but that’s not possible right now. This is the thinnest time of the year for the program. Last fall’s seniors have moved on, while the new recruiting class is still wrapping up high school business.

The Indian who had the best spring of all didn’t suit up on Saturday. That was 6-foot-4 safety Brenden Westbrook, the former Carson High star who still has three seasons ahead of him.

Westbrook missed Saturday’s action with a stress fracture in a foot. That’s not expected to be a major obstacle going forward. He’ll be 100 percent when preseason drills start this summer.

“Westbrook showed in the last two weeks that he’s going to be the impact player we believed he could be when he signed,” Walker said. “There have been a lot of bright spots this spring. He’s been the brightest of all. The game has slowed down for him.”

A couple of former North Rowan Cavaliers, linebacker Eric Gibson and defensive lineman Steve Thurston, got some licks in on Saturday. They’ve paid their dues, they’ve seen quite a bit of game action, and they’re viewed as seasoned veterans now.

Catawba plans to continue to use a 4-2-5 defensive alignment against pass-heavy teams, but it will also employ a 3-4 look, with Thurston as a potential nose guard. He has a non-stop motor and enjoys the challenge of being double-teamed.

DB Trey Murray, defensive end Cameron Davis and linebackers Melvin and Jeremiah Ferguson have emerged as leaders for the 2019 squad. Ferguson and Robert Chery had sacks on Saturday. Caleb Allen had a nice breakup in the end zone.

Catawba has new defensive coaches, including a very young one in recent star linebacker Trey Evans and a very experienced one in former Salisbury and Carson head coach Joe Pinyan. Pinyan will work with the outside linebackers, another sign that Catawba is going to use more 3-4 defense.

On the offensive side of things, Catawba appears to be in good shape at quarterback. Walker said returning starter Ken Avent III has enjoyed an outstanding spring, as have receiver Will Sweeper and offensive lineman Demetrius Blackwell.

“We’ve been able to protect Avent and allow him to sit in the pocket more and see the field,” Walker said. “He’s been good.”

The big task for Catawba’s offense is going to be replacing dynamic back Kenyatta Greene, who was a home-run threat on every touch, whether it was a run, reception or return.

“We’ve got kids in this recruiting class who we believe can give us that special outside threat we had with Kenyatta, but we like the downhill running game we’ve got with the returners,” Walker said. “We’ll adjust our running game to fit our personnel.”

Receiver Chylon Smith sped 40 yards on a jet sweep for Catawba’s most explosive play on Saturday. Avent also fired one long, accurate strike to the end zone that was dropped.

Walker’s duties didn’t stop when the game ended. There was a meet-and-greet with 32 Catawba recruits and their families. Besides hamburgers and hot dogs, that group got some academic assistance during their visit, a head start with things like getting signed up for classes.

It was a low-key production for a Blue/White game, with no scoreboard, no clock and no P.A., but it was a beautiful day in terms of weather. Walker seemed pleased with the turnout in the bleachers at Shuford Stadium and with the intensity on the field.

Best of all, while there were bumps and bruises, no major, career-disrupting injuries occurred during Saturday’s game.

“There was a lot of energy today,” Melvin summed up. “All good energy.”