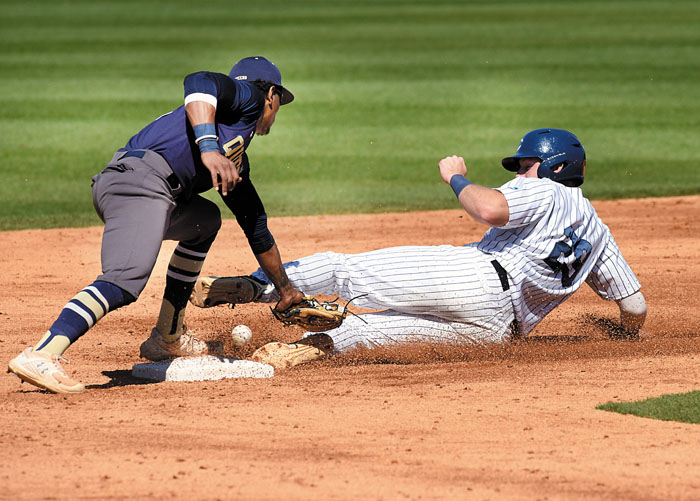 SALISBURY — It was a victory that circled the bases, whether Catawba’s beleaguered pitching staff liked it or not.

The Indians served up five home runs — including a grand slam — yet somehow prevailed over visiting Queens, 16-10, in the opener of Saturday’s scheduled twin-bill. Catawba completed the sweep, winning 8-3.

“Newman Park. That’s about all I can say,” coach Jim Gantt tried to explain, after Catawaba (33-8, 17-3 SAC) earned its fifth straight win. “It happens every year. The weather warms up and you’re playing with older guys. These hitters don’t miss pitches.”

Catawba countered with 12 hits and two homers — Jackson Raper’s fourth-inning grand slam and Heath Mitchem’s two-run shot an inning later — to overcome an early 5-0 deficit. The Indians scored nine runs in the bottom of the fourth, three in the fifth and four more in the seventh to close the scoring.

“You saw what our entire season has been like — underachieving,” said Queens coach Jack McDowell, a former American League Cy Young Award winner. “In that nine-run inning, there were probably four plays we could have made but didn’t. None of them were errors, but we should have made them.”

Despite fielding a first-year team, the Royals (10-25, 3-14) barreled up against Catawba lefty Bryan Ketchie, an unbeaten junior who brought a sparkling, 2.45 ERA to the mound.  After retiring two batters in orderly fashion, Ketchie yielded a towering home run to left field by Queens shortstop Nick Melton.

“Ketchie didn’t have quite the day he usually does,” said Raper. “But our pitching has been strong all year. They just swung the bats really well in a few innings.”

Queens turned the top of the third into a Home Run Derby. Leadoff batter Ryan Dudney jumped on a 1-2 pitch and lined it over the wall in left-center, doubling the visitor’s lead. One pitch later, No. 9 hitter C.J. Hammonds cleared the fence in center. Following Dominic Ford’s double off the base of the wall in right, redshirt freshman Noah Jones tatooed the first pitch he saw, hoisting it beyond the fence and off the scoreboard in left-center, ending Ketchie’s day.

“I think they had a good plan,” Gantt said, after Ketchie allowed five extra-base hits in two-plus innings. “They knew he was throwing strikes — and he does throw strikes. They tried to backside the ball and take his change-up away. Good idea, good plan and they didn’t miss ’em.”

“(Ketchie) threw the ball where he wanted to,” added McDowell. “We were able to make adjustments.”

Catawba did an about-face in the last of the fourth, when it sent 12 batters to the plate and scored nine times after Queens reliever Lee Harrison. Cam Morrison, Jacob Nester and Mitchem delivered run-scoring singles. Bryce Butler coaxed a bases-loaded walk and when Jeremy Simpson was hit by a pitch with the bags full, the Indians caught up, 5-5.

“We’ve had a lot of games like this,” said Mitchem, the DH who went 4-for-5 and drove in four runs. “We’ve been tested before. But at some point, you just felt like we were going to turn it on.”

They turned it over and took the lead for good when Raper yanked a tasty, 0-1 fastball over the wall in left-center for a grand slam and a 9-5 Catawba edge.

“My first swing wasn’t great. I kind of pulled off the ball,” he reported. “The next one caught a little bit of the plate and I was able to drive it toward the scoreboard.”

Mitchem made it 12-5 with two away in the fifth inning, when he knocked a 3-2 pitch out of the park. Queens rallied against winning pitcher Riley Myers for five runs in the top of the seventh — the last four when Jones cleared the bases with his second homer of the game and eighth of the season. “He’s been doing it all year,” McDowell said.

Catawba small-balled its way against Queens relievers Jake Mincha and Alec Hunter in the bottom of the seventh — parlaying an infield error, a walk, Jacob Nester’s sac fly and RBI-singles by Mitchem, Simpson and Raper into four insurance runs.

“At the end of the game, all that matters is the outcome,” Mitchem said. “Today, this is how the ballpark was playing. As long as we win, we’re happy.”

In the second game, Mitchem continued his great day with two hits and two walks. He also drove in a run. Hunter Shepherd had two hits and drove in two runs, as did Raper. Simpson also added two safeties and an RBI.

After the flurry of home runs in the first game, there was just one in the nightcap — from Catawba’s Robbie Cowie.

Greg Brown (5-1) pitched the final four innings of the scheduled 7-inning contest, picking up the win for the Indians. He allowed just three hits and no walks, while striking out five Queens batters.

Sawyer Strickland started on the mound for Catawba, but gave way to Brown after allowing five hits and three runs in three innings.

Catawba jumped out to a 3-0 lead in the first inning and never trailed. Raper had the key hit in the frame, a two-run double off Royals’ starter Zach Kelly (2-5).

NOTES: Raper finished the first game with a .384 batting average and a team-high 42 RBIs. … Reliever D.J. Laxton struck out five batters in 2 2/3 innings and earned his third save. Myers (6-0) retired 12 of the first 13 men he faced. … Right-fielder Lee Poteat made a diving catch to rob Melton of an extra-base hit in the ninth. Butler, in center field, committed one of his routing larcenies in the Queens sixth when he scaled the wall and snared Anthony Orta’s rocket. … The teams conclude the three-game set today at Newman Park. Gametime is 1 p.m.