‘A world without Latasha’: Community mourns after Wilks’ sudden death 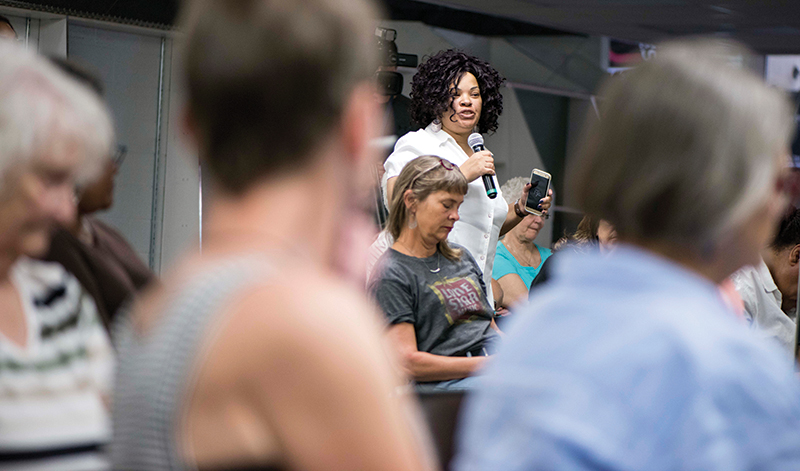 SALISBURY — At 45 years old, Rev. Latasha Wilks left behind a legacy of advocacy.

Wilks died suddenly in her home on Friday. The cause of death was unclear Saturday.

Community leaders and friends of Wilks spoke of her passing in disbelief, telling stories of her childhood, perseverance in the face of challenges and her desire to make a lasting impact through public office.

“Latasha was one of the most loving, boldest, bravest people I know with a powerful commitment to our community,” said Ash Love, a local photographer and activist. “She didn’t care if an idea wasn’t popular. She taught me courage. I’m sad to lose a big sister and friend in this life and community.”

Wilks, who was born in Salisbury, was a minister at her childhood church, Mount Zion Missionary Baptist Church. She founded Let’s Lend a Helping Hand in 2011. She had recently been a candidate for Salisbury City Council and the Rowan County Board of Commissioners. Less than a week before her passing, she was named vice chair of the Rowan County Democratic Party.

She leaves behind five kids.

Anthony Smith, a pastor at Mission House, said Wilks’ life was one of redemption. She overcame a challenging past, connected to her faith community and dove deeper into ministry.

When running for Salisbury City Council in 2017, Wilks knew she needed to address her past and told a Post reporter about being convicted on a felony charge of trafficking in 2008. It was in that moment, Rowan County Democratic Chair Geoffrey Hoy said, that she showed courage.

Wilks’ bravery also was apparent to City Councilwoman Tamara Sheffield, who crossed paths with Wilks when she ran for City Council in 2015. Sheffield recounted Wilks saying she had never been prouder to cast a vote for her. Then, Sheffield got the opportunity to return the favor in 2017.

“She ran for city council and county commissioners,” Sheffield said. “I got the chance to cast votes for her.”

Alisha Byrd-Clark, a Rowan-Salisbury School board member, grew up with Wilks at Mt. Zion. They were both in the youth choir. Wilks’ campaigns for public office represented who she truly was, Byrd-Clark said.

“While campaigning for the Salisbury City Council and the Rowan County Board of Commissioners, she fought hard for what was right, stood up for her community and she was exactly what her slogan read — a voice for the people,” Byrd-Clark said.

Rev. Nilous Avery, of Mount Zion Missionary Baptist Church, said Wilks was a mother figure for many in the community.

Until the end of her life, Avery recounted, she was helping.

On Friday, just before her death, Wilks was helping a family plan for a funeral and was home baking pies.

One day earlier, Hoy said, Wilks emailed him a logo design for her voting precinct.

“She didn’t just talk, she put action behind her words,” said Regina Dancy, co-chair of Women for Community Justice of which Wilks was a founding member.

“This has been heartbreaking,” Wilks said. “We, the community, just lost a tremendous, tremendous life force in our community.”

Alex Clark, the founder of youth program COMPASS, said she was a rare jewel and will be missed.

“I’m still in disbelief,” Clark said. “She was an extraordinary woman. Her heart was in the community.”

Services for Wilks will be announced at a later date. Noble and Kelsey Funeral Home is handing funeral arrangements.