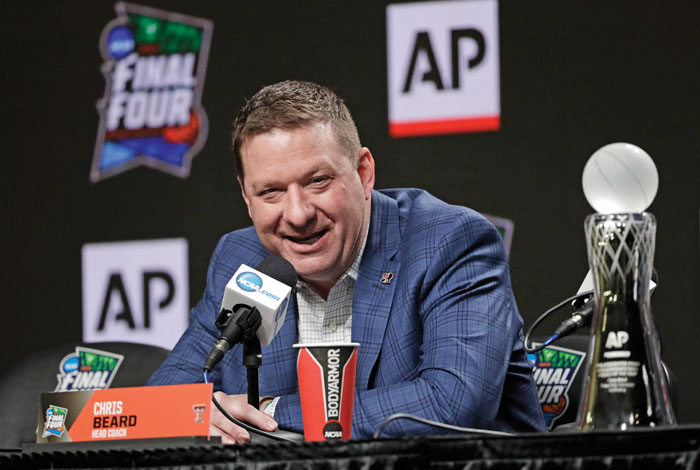 MINNEAPOLIS (AP) — Chris Beard of Texas Tech had a cheering, boisterous audience as he took stage Thursday to accept the trophy as The Associated Press men’s college basketball coach of the year — his players and family filling the front row to celebrate his success as their own.

He was happy to share a moment he said belonged to them, too.

“I don’t know what I possibly could have that John Wooden and Bob Knight and (Michigan State coach Tom) Izzo didn’t have, but I don’t think that they probably had their team — 30 minutes removed from practice — sitting on the front row when we got the award, so this is special,” Beard told his players from the stage. “So I want to thank each player that played on this year’s team. I wouldn’t be here if it wasn’t for you guys.”

The players’ presence — full of cheers and even a news conference question from graduate transfer Tariq Owens — was an unusual sight for the annual award presentation. It was also a sign of how the Red Raiders are bonded by their well-traveled coach’s work, work, work approach that guided his career on its winding path through obscure, overlooked coaching jobs to the college basketball’s biggest stage.

“I’ve always believed you have to be who you are,” Beard said in an interview with the AP. “You can never forget who you are. … Sometimes as you advance in the profession and the logo on your shirt changes or the title next to your name changes, you kind of change. I’ve never wanted to do that.”

Beard earned 20 of 64 votes from the same panel that selects the weekly AP Top 25, with voters submitting ballots before the start of the NCAA Tournament. Beard’s team had won a share of its first Big 12 regular-season title at the time of the voting. In the tournament, Texas Tech pushed past top-seeded Gonzaga to win the West and earn its ticket to Minneapolis.

In this Final Four, Izzo and Tony Bennett of Virginia have also won the award.

Houston’s Kelvin Sampson was second with 13 votes after the Cougars finished with a program-record 33 wins before losing in the Sweet 16.

Beard and Sampson were the only coaches to receive at least 10 votes, with 12 coaches splitting the rest of the ballots.

Beard has guided the Red Raiders to the program’s first Final Four behind the growth of sophomore Jarrett Culver and a rugged defense that is locks down opponents with an efficiency not seen in years.

Not bad for a team that lost six of its top eight scorers from last year’s Elite Eight run. Nor for a 46-year-old coach who is only in his third season at Texas Tech since making stops at Division II and III programs within the past seven years.

It’s sheer force of will that helped Beard get here, a tireless work ethic rooted in the simple belief that anything less won’t be enough, along with the feeling of being an underdog no matter how many games his team wins.

“It’s just reality, it’s not a made-up story,” Beard said. “I wasn’t a great Division I player myself and everything that I’ve kind of worked for in this has just been about trying to prove people wrong and constantly trying to validate our last success.

“Even this week with everything at stake, I find myself kind of thinking about next year and our recruiting class and starting next week,” Beard said. “I don’t think it’s pressure, but I feel that responsibility to get back in the fight next year. That’s just my mentality.”

It’s easy to see why when tracking a career path filled with stops at jobs way, way off the main road.

There was the first head coaching job at Fort Scott Community College in Fort Scott, Kansas — population 7,813. There was a stint with the American Basketball Association’s South Carolina Warriors. He later coached at Division III McMurry (2012-13) and Division II Angelo State (2013-15) before getting his first Division I head coaching job at Arkansas-Little Rock in a career that was finally set to take off after years of largely unnoticed toil.

True to form, there was one final twist in the road before getting here: a brief 19-day stop at UNLV before deciding the pull of Texas Tech — where he had worked previously as an assistant for 10 years under both Bob and Pat Knight — was too much to ignore.

“He’s a great motivator man, that’s what he does,” senior Brandone Francis said. “He started down below, junior college and DII and schools that I don’t really even know the name of. He’s a grinder, man. He works extremely hard. He has the right people around him.”