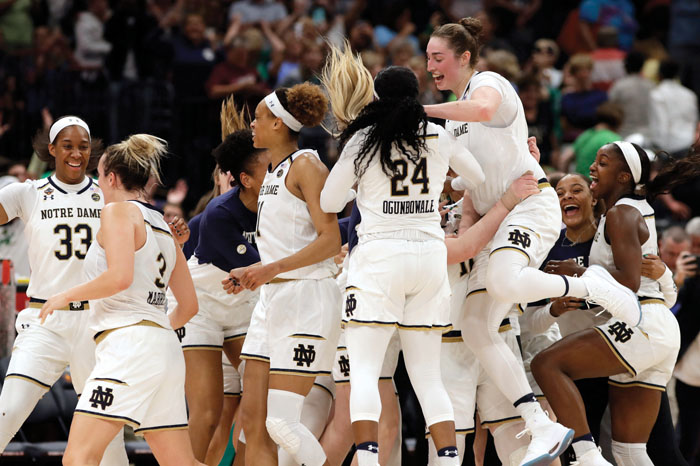 The Notre Dame team celebrates at the end of the team's 81-76 win over Connecticut during a Final Four semifinal of the NCAA women’s college basketball tournament Friday, April 5, 2019, in Tampa, Fla.(AP Photo/Chris O'Meara)

By DOUG FEINBERG AP Basketball Writer
TAMPA, Fla. (AP) — Arike Ogunbowale scored 23 points and led Notre Dame’s rally from a nine-point deficit in the fourth quarter as the defending champion Irish beat UConn 81-76 Friday night to return to the title game.
The Irish will face Baylor for the crown Sunday night, trying to become the fourth different school to win consecutive championships — UConn, Tennessee and Southern California have done it. Notre Dame coach Muffet McGraw danced a little jig at midcourt after this comeback victory.
Baylor beat Oregon 72-67 in the first semifinal, setting up a rematch of the 2012 national championship game the Lady Bears won 80-61.
This game between the Huskies and the Irish was a rematch of last season’s Final Four classic that Notre Dame won on a last-second shot by Ogunbowale. This one — the latest chapter in the greatest rivalry in women’s basketball over the past decade — provided a fitting encore.
Notre Dame (35-3) trailed 64-55 with 7:52 left before scoring 13 of the next 16 points to take a 68-66 lead on Ogunbowale’s short jumper with 3:56 left. The teams then traded the lead five times over the next few minutes with Jessica Shepard hitting a jumper from the foul line with 1:27 left to put the Irish ahead 75-74.
After Crystal Dangerfield missed a drive down the lane, Ogunbowale hit two free throws to give the Irish a three-point advantage with 58.3 seconds left. On UConn’s next possession, Brianna Turner came flying out of nowhere to block Napheesa Collier’s layup attempt and then Ogunbowale hit two more free throws to make it a five-point game.
Katie Lou Samuelson scored 20 points — all in the second half — for coach Geno Auriemma’s Huskies (35-3).
The star matchup between Ogunbowale and Samuelson never got going in the first half. Ogunbowale scored just two points before the break, Samuelson was shut out.
Samuelson was the first to hit in a big way, scoring 15 points in the third quarter. Her three foul shots with a second left gave UConn a 54-52 lead.
The Huskies’ lead kept growing before the Irish rallied in front of a sellout crowd of 20,062. Ogunbowale had 14 points in the fourth quarter.
These two teams have had a habit of playing on the game’s biggest stage. UConn and Notre Dame have now played seven times in the national semifinals or title game since 2011 — the Irish hold a 4-3 advantage.
There has been a different vibe around UConn this season. Unlike the previous two years, they don’t have the burden of a record winning streak or an unbeaten season. Heading into their showdown with rival Irish on Friday night, the Huskies had already lost two games this season and didn’t have, as Auriemma put it, “the fear of losing.”
UConn had never lost three straight years in the Final Four until now.
The Huskies jumped out to a 13-4 lead behind strong play from Collier and a stellar defensive effort as the Irish missed 14 of their first 16 shots. The Irish closed the opening period with a 8-3 burst to only trail by four after one quarter.
The Irish continued its run and took a 22-18 lead on a putback by Ogunbowale. It was her only basket of the first half as she went 1 for 7 from the field.
The teams then traded the lead over the rest of the half with the Christyn Williams’ jumper in the lane just before halftime giving the Huskies a 30-29 advantage.
REPLACEMENT OFFICIAL
Official Michol Murray slipped in the first quarter opposite the UConn bench with 4:54 left and after trainers came over to check her knee, they took her back to the locker room in a wheelchair. Standby official Gina Cross took over. It’s the first time in the history of the Final Four that the standby official had to enter the game according to the NCAA. Official Lisa Jones, who refereed the first game, was brought back to serve as the new standby.
TIP-INS
Samuelson and Collier finished their career with 4,743 points which is the highest combo for a pair of classmates in school history. … This was the 50th meeting between the schools and UConn holds a 37-13 lead in the all-time series.
___
Follow Doug Feinberg on Twitter at http://www.twitter.com/dougfeinberg
___
More AP college basketball: https://apnews.com/WomensNCAATournament and https://twitter.com/AP_Top25

Gausman sharp in 2019 debut as Braves shut out…