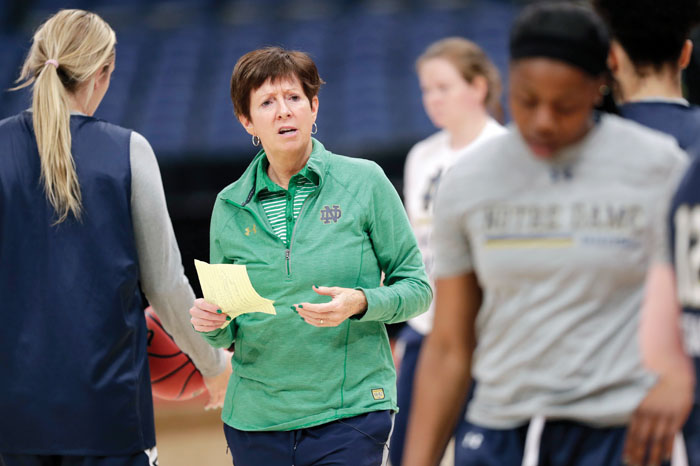 TAMPA, Fla. (AP) — Muffet McGraw says it’s time for more women in positions of power in all walks of life, including women’s basketball.

“Did you know that the Equal Rights Amendment was introduced in 1967 and it still hasn’t passed?” she said. “We need 38 states to agree that discrimination on the basis of sex is unconstitutional. We’ve had a record number of women running for office and winning, and still we have 23% of the House and 25% of the Senate.”

A frustrated McGraw is disappointed that there aren’t more female leaders across the country.

Oregon guard Sabrina Ionescu applauded McGraw for speaking out, although she doesn’t totally agree with her.

“I think those that are most qualified should be in that position regardless of gender,” the All-American said. “ … But for the fact that she’s comfortable in her own skin to go out and say that and believes in that shows who she is, shows she confident in herself. So I respect that. “

McGraw, whose Notre Dame team plays UConn on Friday in a national semifinal showdown, feels girls are taught at an early age to defer to men.

“I think women need to have more confidence and apply for jobs. I think we wait to be asked,” she said. “It goes back to high school when you’re waiting to be asked to the prom. I think women go after jobs in a very different way than men do. We want somebody to pursue us rather than really going for it.

“Girls are socialized to know when they come out, gender rules are already set. Men run the world. Men have the power. Men make the decisions. It’s always the man that is the stronger one.”

McGraw’s strong stance is making an impression on Irish players.

“I think there are six female coaches in men’s college basketball. Of course, it’s like never talked about,” Notre Dame center Mikayla Vaughn said. “You expect men to coach men. You don’t expect a woman to lead men. So, I think it’s good by just by getting the conversion going about why aren’t there more female coaches. Obviously we know there are good male coaches but I also think there’s a need for female coaches. I think if they’re given more opportunities maybe we can kind of bridge the gap.”

The 63-year-old Hall of Fame coach, who said in a recent story that she would never hire another male assistant coach, believes women can do more to help each other.

“I think when people get to a certain position, they need to be able to reach down and pull somebody else up, they need to be better mentors,” she said. “I think we can do a lot more on networking. Guys have that down. They help each other. They know how the system works. We don’t.”

“I think anybody that speaks up in favor of advancing a segment of the community that could benefit from our voice, absolutely,” Auriemma said.