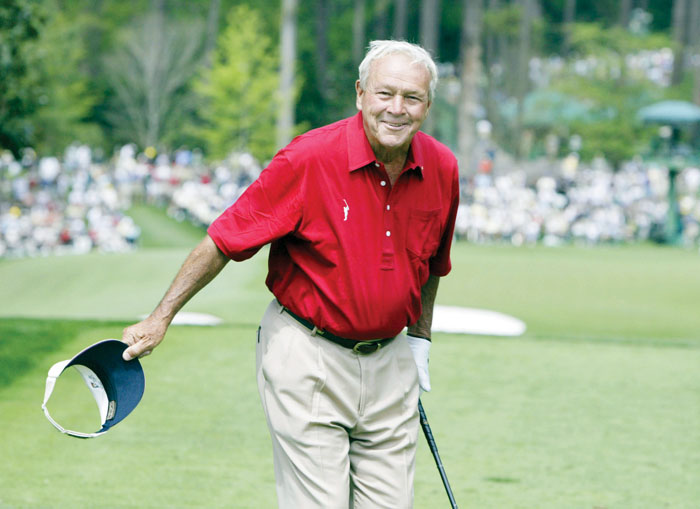 FILE - In this April 9, 2004, file photo, Arnold Palmer bows to the gallery after landing his tee shot only a few feet away from the pin on the sixth green during the second round of the Masters golf tournament at the Augusta National Golf Club in Augusta, Ga. Augusta National has rules, just like most private clubs, and its members expect them to be followed. Unlike other clubs, however, Augusta doesn't just host a major, it runs the major. The heritage built up over eight decades creates an aura that keeps fans and players on their best behavior. (AP Photo/Amy Sancetta, File)

By DOUG FERGUSON AP Golf Writer
AUGUSTA, Ga. (AP) — Francesco Molinari learned on the eve of his first appearance at the Masters this major was different from the others.
He was at Augusta National in 2006, not to play but as the caddie for older brother Edoardo, the U.S. Amateur champion. Their father caddied in the Par 3 Tournament, and Molinari was trying to keep up outside the ropes.
Dashing from the green to the next tee, he soon was confronted by a club member.
“After like six steps, one of the green jackets came in and said, ‘No running,'” Molinari said. “That week, you’re always conscious of what you’re doing.”
Augusta National has rules, just like most private clubs, and its members expect them to be followed.
Unlike other clubs, however, Augusta doesn’t just host a major.
It runs the major.
The heritage created by co-founders Bobby Jones and Clifford Roberts and built up over eight decades has created an aura that permeates everything and everybody. It is the ultimate invitational — even four-time champion Tiger Woods get an invitation in the mail.
Fans are on their best behavior. For the most part, so are the players.
No phones are allowed, which Ian Poulter once discovered the hard way. He tweeted a picture from his practice round one year.
“I didn’t get told off,” he said. “I got asked politely not to be taking pictures. So you don’t. There’s a way they say things that mean, ‘You shouldn’t do that,’ which is different from how other people tell you. They have their way. It’s cool.”
Molinari says he once saw a player snap a club in half going down the 11th fairway, though he concedes it’s rare.
Bryson DeChambeau had a meltdown on the practice green in Mexico City earlier this year when he pounded his putter into turf, and then did his best to repair the damage. Those scenes aren’t likely at Augusta National.
Rory McIlroy was playing the British Open as an amateur in 2007 when he saw Henrik Stenson smash a tee marker out of frustration. Golf makes everyone crazy, as McIlroy has experienced himself. He once hurled a 3-iron into a lake at Doral and broke a club at Merion during the U.S. Open.
“I would think twice about it there,” he said of the Masters. “You get in trouble. You want to come back.”
Does anyone really think Augusta National would not invite a player back if he were eligible?
No one really knows.
“There was a little incident in the Middle East,” McIlroy said with a smile, referring to Sergio Garcia being disqualified for damaging five greens early in the third round of the Saudi International. “If that would have happened at Augusta, I don’t think he would have been invited back.”
No one wants to find out.
“I was under the assumption it was possible,” Paul Azinger said.
There is a respect for the tradition, sure, but there is an atmosphere at Augusta that starts with how it expects the fans to behave. No running. No screaming. No phones for talking, texting, tweeting. It’s rare to see fans in blue jeans, even though that’s not part of any dress code.
And it carries over to the players.
“I’ve gotten upset at Augusta before,” Jimmy Walker said. “But I think you’re on a different level because they expect the crowd to act a certain way, and that flows into the rest of the tournament. You can’t act rowdy or unruly or they’ll boot you right out of there. There is an honor system with the seats. There’s a culture there, and as a player, you feel it. It’s a little different.”
Translation: No one is yelling “BA-BA-BOOEY!” after a tee shot.
“I remember my friend being with me once,” Louis Oosthuizen said. “He was shouting in a deep voice, ‘LOOUU-eee.’ He got a tap on the back. It was a guy in a green jacket and he said, ‘Sir, that will be your last time.’ And that was it. That’s great. Everybody likes that. I’ve never heard anyone in the crowd misbehave. You don’t hear ‘Smashed Potatoes’ or whatever they shout.”
That’s not to say he hasn’t seen fans get admonished, even his own relatives.
He recalls one year his father-in-law went ahead a few holes to wait on him, sat down under a tree and dozed off. Oosthuizen arrived in time to see a member in his green jacket tap his father-in-law on the shoulder and tell him, “You’re not allowed to sleep.”
“There’s definitely a higher respect level, which is crazy — we should respect everyone exactly the same,” Poulter said. “But I think for some reason, everyone treads carefully. I don’t know why. The members don’t bite. But the place has its own aura. It’s so good. … I think because there’s a no-nonsense policy there, people with a ticket treat us and the place with that much respect — and we do, too. We feel pretty special to be there, right?”
The original name of the tournament was Augusta National Invitation Tournament.
“Invitation” lives on in spirit.
Woods was summoned to the office of club chairman Billy Payne in 2010 when he returned from the scandal in his private life. Payne didn’t reveal what was said, though it was clear he wasn’t asking Woods about his putting. Payne publicly chastised Woods at the chairman’s annual press conference, saying Woods’ future “will never again be measured only by his performance against par, but measured by the sincerity of his efforts to change.”
Such a lecture did not happen — and would not — at the U.S. Open, British Open or PGA Championship that year.
Only at Augusta.
___
More AP golf: https://apnews.com/apf-Golf and https://twitter.com/AP_Sports