Gausman sharp in 2019 debut as Braves shut out Miami 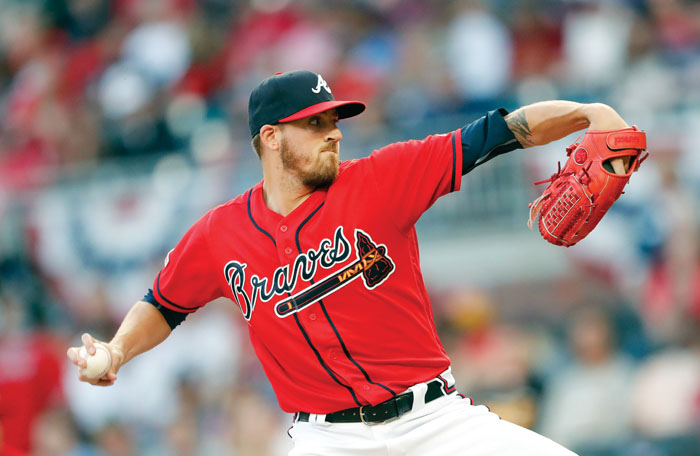 By CHARLES ODUM AP Sports Writer
ATLANTA (AP) — Kevin Gausman allowed only two hits in seven innings, Ronald Acuña Jr. and Tyler Flowers homered and the Atlanta Braves beat the Miami Marlins 4-0 on Friday night.
The Braves escaped a bases-loaded jam in the ninth and won their fourth in a row. Miami has lost four straight, and nine consecutive games in Atlanta.
Gausman combined with relievers Jesse Biddle and Arodys Vizcaíno on a three-hitter.
Vizcaino walked Peter O’Brien to open the ninth. Pinch-hitter Martin Prado doubled down the left field line and Neil Walker walked with two outs to load the bases. Vizcaino closed out the game on Starlin Castro’s fly ball to deep left field.
Gausman (1-0), who began the season on the 10-day injured list with right shoulder tendinitis, was impressive in his 2019 debut. He walked the first two batters he faced, but got out of trouble with the help of a double play. He then allowed only two baserunners in the next six innings.
Gausman struck out the side in the third and sixth innings and allowed two hits with two walks and seven strikeouts.
The strong start by Gausman came one night after Max Fried took a perfect game into the sixth inning in a 9-4 win over the Cubs. Manager Brian Snitker said Fried, who pitched in relief in two games, has earned another start.
Right-hander Shane Carle was optioned to Triple-A Gwinnett before the game to clear a roster spot for Gausman.
Pablo López (1-1) gave up four hits in the fourth, including a two-run homer to right field by Acuña. With two outs, Flowers added a line-drive homer over the left field wall. Ender Inciarte’s single to right field drove in Dansby Swanson, who walked.
López allowed four runs on seven hits and one walk in five innings.
The Braves were 14-5 against Miami last season, including an 8-1 record at SunTrust Park.
TRAINER’S ROOM
Braves: LHP A.J. Minter, who made his 2019 debut on Thursday night in his return from left shoulder inflammation, was “bouncing around the clubhouse” on Friday and feeling good, according to Snitker. Even so, Snitker said his goal was to “ease him back in” and avoid using him on back-to-back days for now. … RHP Mike Foltynewicz (right elbow bone spur) is set for his second rehab appearance on Tuesday. He didn’t allow a hit or a run in five innings for Gwinnett on Thursday night.
UP NEXT
Marlins: Miami’s six-game road trip continues when RHP Sandy Alcantara looks for his second straight win to open the season on Saturday night. It will be his first career start against the Braves.
Braves: RHP Kyle Wright will try to bounce back from a loss at Philadelphia in his first career start last week when the rookie right-hander faces Miami for the first time. Wright gave up three runs in 4 1/3 innings in a 5-1 loss at Philadelphia on Sunday.
___
More AP MLB: https://apnews.com/MLB and https://twitter.com/AP_Sports