Braves make it three straight wins over the Cubs 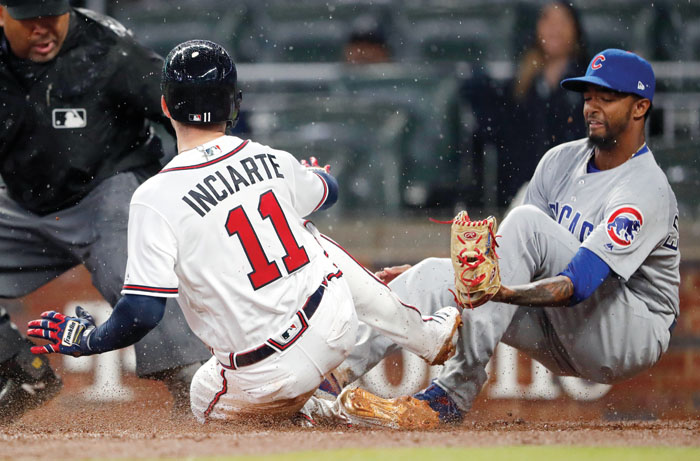 ATLANTA (AP) — Max Fried took a perfect game into the sixth inning, Nick Markakis drive in five runs with five hits and the Atlanta Braves beat Yu Darvish and the Chicago Cubs 9-4 on Thursday night to complete a three-game sweep.

Fried (1-0) made a strong bid to keep a spot in Atlanta’s rotation after Kevin Gausman and Mike Foltynewicz come off the injured list. Gausman is expected to make his debut on Friday night, and Foltynewicz, the 2018 All-Star, could return in about 10 days.

Making only his 10th career start and his first this season after two scoreless relief appearances, the 25-year-old Fried recorded 17 straight outs to open the game. Mark Zagunis singled up the middle with two outs in the sixth to become Chicago’s first baserunner.

Fried, a left-hander, allowed one hit with no walks and five strikeouts in six innings. The Braves led 9-0 before the Cubs scored four runs in the ninth. Anthony Rizzo hit a two-run homer and Javier Baez followed with another homer off Chad Sobotka.

A.J. Minter, making his 2019 debut after coming off the injured list, walked two batters to load the bases. Zagunis drove in a run with a groundout and Minter struck out Albert Almora Jr. to end the game.

The three-run double by Markakis was the big hit in Atlanta’s five-run fifth inning that knocked Darvish (0-1) out of the game. Markakis matched his career high with three doubles and five hits.

It was a troubling series for the Cubs, who committed six errors in an 8-0 loss on Monday night and walked five batters in the eighth inning of a 6-4 loss on Wednesday night.

Darvish gave up three runs on five hits and four walks, one intentional, in four-plus innings. He has issued 11 walks in a combined 6 2/3 innings in two starts, including a career-high seven walks in only 2 2/3 innings of his first start at Texas on Saturday.

Darvish was removed after giving up a leadoff double to Ender Inciarte and a walk to Josh Donaldson in the fifth. Right-hander Carl Edwards Jr. gave up two walks and threw a wild pitch that allowed Inciarte to score from third. Tyler Chatwood, allowed the three-run double to Markakis and a run-scoring single to Dansby Swanson.

Light rain began in the second inning and continued most of the game.

Cubs: C Willson Contreras remained in the game after apparently having his left thumb jammed while tagging out Ozzie Albies in the fourth. Contreras blocked the plate, and Albies made a head-first slide into the catcher’s glove.

Braves: Minter had been out with left shoulder inflammation. … Foltynewicz (right elbow bone spur) did not allow a hit or a run in five innings of his first of two planned rehab starts with Triple-A Gwinnett.

The Braves put large get-well cards for former manager Bobby Cox at three locations for fans to sign. One of the four-foot wide cards was placed near Cox’s statue outside SunTrust Park. Cox, the Hall of Fame former manager, suffered a stroke on Tuesday and remains in an Atlanta-area hospital. No details about Cox’s condition have been released by his family or the team. Cox had a role in the pregame schedule before Monday night’s home opener.

CLEVELAND (AP) — Trevor Bauer was pulled by manager Terry Francona after seven hitless innings and 117 pitches, and watched from the dugout as Toronto’s Freddy Galvis broke up Cleveland’s bid for a combined no-hitter with a leadoff single in the ninth inning of the Indians’ 4-1 win Thursday night.

Bauer was attempting to throw Cleveland’s first no-hitter in 38 years — on the 25th anniversary of Progressive Field’s opening — but was taken out as his pitch count increased.

“It was the right decision,” Bauer said.

Jon Edwards got two outs in the eighth before closer Brad Hand worked out of a bases-loaded jam. Hand, however, gave up a hard single to center by Galvis. Alen Hansen followed with Toronto’s second hit and the Blue Jays scored before Hand struck out two for his third save.

Bauer (1-0) walked six and struck out eight. The Indians haven’t pitched a no-hitter since Len Barker’s perfect game against Toronto in 1981.

Laureano tossed out three runners as the A’s took three of four in the series. Stephen Piscotty went 4 for 4 with a home run, double and five RBIs to help Oakland win for the fifth time in six games.

The Red Sox fell to 2-6, the worst start for a defending World Series champion since the stripped-down Marlins struggled in 1998. J.D. Martinez homered for Boston.

Wilmer Difo drove in two runs, and Washington’s struggling bullpen shined after Strasburg (1-0) struck out nine in 6 2/3 innings. Matched against Syndergaard (0-1) for the second time in six days, Strasburg took a one-hitter into the seventh.

Gary Sanchez and Luke Voit also homered for the Yankees, who beat Baltimore in their own season opener last week.

Torres’ first home run of the season got New York within 3-1 in the third inning, and his three-run drive in the sixth off reliever Mike Wright (0-1) put the Yankees up 5-4. Torres also doubled.

James Paxton (1-1) struck out nine and allowed four runs in 5 1/3 innings to win his first game with New York being traded from Seattle in November.

A day after the Reds got three hits in a 1-0 loss to Milwaukee, they managed six hits against four Pittsburgh pitchers.

Lyles, who played for San Diego and Milwaukee last year, allowed three hits. He was activated from the injured list before the game after being out with discomfort on his right side.

DETROIT (AP) — Spencer Turnbull struck out 10 in six innings, and the Detroit Tigers drew four straight walks to start the bottom of the seventh, taking the lead for good against Kansas City.

Josh Harrison stole two bases and scored three times for the Tigers in their home opener. It was tied at 3 in the seventh when Kansas City reliever Kyle Zimmer (0-1) walked Harrison, Nicholas Castellanos and Miguel Cabrera in succession. Kevin McCarthy then came on and walked Niko Goodrum on four pitches, forcing in a run.

Whit Merrifield singled, tripled and scored twice for the Royals, extending his hitting streak to 26 games dating to last season.