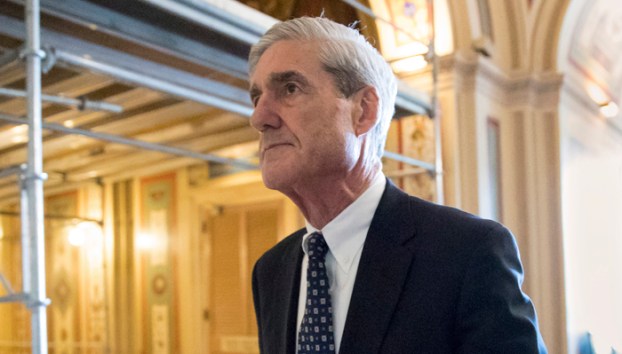 Special counsel Robert Mueller sent the attorney general his report on his investigation of the Trump campaign and Russian meddling in the 2016 election. J. Scott Applewhite/Associated Press file photo

Apparently, I am supposed to be embarrassed now.

That, at least, is my interpretation of a few strange tweets and emails that have come my way in the week since Attorney General William Barr issued his summary of Special Counsel Robert Mueller’s report on Donald Trump. One individual wrote: “I noticed that you’ve released your bite on Trump’s ankle now that Mueller couldn’t recommend an (sic) indictment.” Another, apparently unable to rise to that level of verbal sophistication, simply sent a bunch of LOLs.

The funny thing is, I’ve actually written very little about the probe into Trump’s ties with Russia — and certainly nothing longing for or anticipating its outcome. But the attempt of a few fact-challenged Trump fans — a tautology, I know — to taunt me over Mueller’s reported inability to prove Trump or his campaign colluded with the Russians in the 2016 election is just part of a larger narrative that has emerged in the past few days. It holds that journalism laid an egg here, producing an epic fail that will haunt it for years.

The charge was leveled, not surprisingly, by Trump, who tweeted that “The Fake News Media has lost tremendous credibility.”

He was echoed by his spokeswoman, Sarah Huckabee Sanders, who said, “The liberal media owe the president and they owe the American people an apology.”

He was also echoed by Fox News’ Sean Hannity, who promised to “hold the corrupt media accountable for years of misleading the American people!”

If all of that was predictable, many of us were surprised to hear Matt Taibbi, a liberal journalist who has been no friend to the Trump regime, join the chorus, calling this “a death blow for the reputation of the American news media.”

Beg pardon, but huh? What in the sainted name of Walter Cronkite is he talking about? I know media failure. I’ve seen media failure. Uncritically swallowing false WMD claims was failure. Giving candidate Trump free air time was failure. This was not.

But let’s get real. Would anyone really argue that in a situation where, a, American intelligence reports a hostile foreign power interfered in a U.S. election to benefit one candidate; b, that candidate publicly implores the hostile power for help; c, his campaign is found to have met with agents of that power; d, the candidate dictates a lie to explain away the meeting; e, the FBI is concerned enough to open a counterintelligence probe, that news media should not investigate as aggressively as possible?

The Great Chicago Fire of 1871 didn’t produce that much smoke. Failure to investigate would have been journalistic malpractice.

Yet, reporters are expected to hang their heads now because an attorney general whose skepticism about the Mueller probe is a matter of public record issues a four-page summary of a 300-plus-page report claiming Mueller found no evidence of collusion? No. If — and it’s a big if — that proves true, so be it.

But if it doesn’t — or if any of the dozen-plus other investigations still swirling about Trump produces superfluous evidence of his malfeasance — thank God for a free and mostly fearless news media to report on it. That is our sacred charge and, yes, there have been times we failed to live up to it. This, however, is not one of them.

Letter: Explore all avenues before closures

After listening to presentations during the Rowan-Salisbury School Board meeting on March 25, the expressions on the faces of some... read more