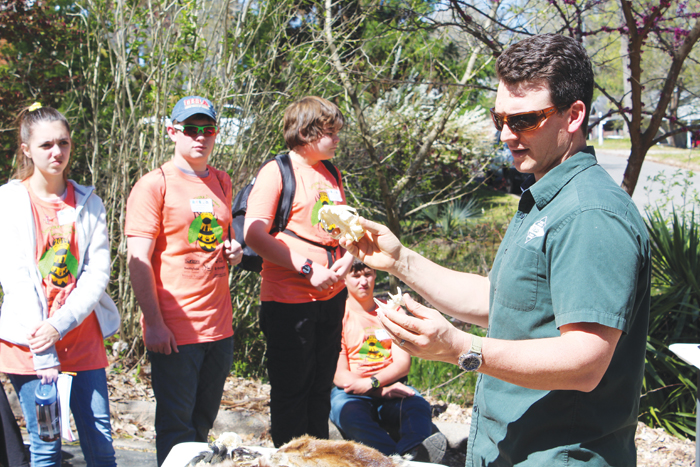 SALISBURY — Amid a busy week of renovations, upgrades and spring cleaning, the Horizons Unlimited Museum welcomed students from 12 counties for this year’s Southern Piedmont Envirothon.

Envirothon is a multinational competition designed to test students’ knowledge and skills in the areas of aquatics, forestry, wildlife, soils and land use, and current environmental issues.

According to the competition website, Envirothons is the “Olympics” of natural science.

In North Carolina, the competitions are organized by local Soil and Water Conservation Districts. Andy Miller, with the Davidson County district, led this year’s Southern Piedmont competition, a regional qualifier from which the top seven competitors move on to a state championship.

At the state and national competition levels, winning teams have the chance to compete for hundreds of thousands in scholarships and prizes. But for coordinators and volunteers, the competition is about more than monetary or even academic gains.

“These students hear all the time that our environment is bad, that it’s broken and can’t be fixed,” said Laura Shidal of the North Carolina Forest Service, who led a class on forestry. “We’re working to make sure they know that even little things they do can and will make a difference.”

Throughout the course of a school day on Tuesday and Wednesday, Envirothon participants spent the morning engaging in hands-on lessons through natural resource professionals such as Shidal. Tweens and teens identified tree types by leaves and blossoms, counted various aquatic species, evaluated soil cross-sections, handled pelts and skulls of local wildlife, and raced to answer questions in an environmental issue team challenge.

Lessons were followed with a team test, with 44 teams competing in the Southern Piedmont event: 21 from middle schools on Tuesday and 23 from high schools on Wednesday.

Through these lessons on natural resources, Envirothon offered young learners the chance to explore career opportunities in conservation. Shidal shared her own history of a childhood spent at the Clemmons Educational State Forest in Clayton.

“One big thing is, if you can involve yourself in a career doing something that interests you and that you believe in, work doesn’t feel like work,” she said.

“I come from a family of engineers. I went to North Carolina State University to study engineering and I hated it,” Medford said. “But then I was walking through the brickyard one day and heard someone say something about the fisheries and wildlife program. I knew I had to check it out.”

Local high school students may not yet have made plans for careers in conservation, but many express an enthusiasm for the out-of-the-classroom activity.

Team members from West Rowan High School said Envirothon offered a chance for learning that wasn’t “confined to a rubric.”

“For me, this was one of the most fun experiences I’ve ever had in the FFA, just because it’s nothing like the other competitions,” said senior and FFA chapter President Mayerlin Alpizar. “With this it’s so much more relaxed and you’re with a team.”

Alpizar said she had been competing in Envirothons since her sophomore year. She focuses on current environmental issues.

“Current environmental issues are a really important thing that I have to look into,” she said. “I’m trying to further my education in that or my career. I want to work for a state office in the FFA, so I need to be aware and knowledgable of the environmental issues that are happening around me so I can get a good grip on it.”

Abraham Long, a senior with plans to attend High Point University and major in sports communication, said the competition opened his eyes to the relationship between different facets of the environment.

“Everything is so interconnected. They do a really good job of pointing that out, here,” Long said. “Everything plays in with different type of plants and soil composition, everything has a factor in each different section, and that’s what I really take away from today.”

Rockwell AMVETS, auxiliary go to the wire for food…