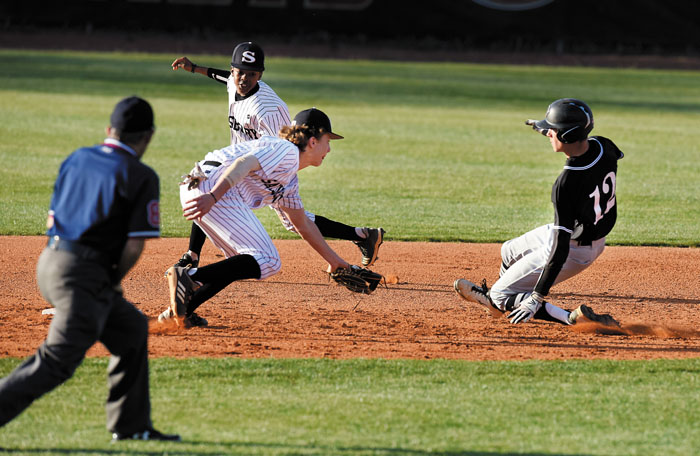 SALISBURY — It didn’t take long for Ledford’s baseball team to wear out its welcome Wednesday evening.

The visiting Panthers scored 10 runs in the top of the first inning at Robertson Stadium, batted around in each of the game’s three frames and steamrolled Salisbury, 25-1.

“We couldn’t get through the first inning,” coach Mike Herndon said, shortly after the Hornets (9-6, 7-4 CCC) used six pitchers to record nine outs. “We gave up a 10-spot and I mean, and that was it. We couldn’t get anybody out.”

It only got worse from there. Conference-leading Ledford (14-0, 11-0) tacked on six runs in the second inning and nine in the third — when N.C. State signee Chris Villaman launched his first career grand slam and second home run of the night.

“This was very unexpected,” said winning coach Chris Adams. “Every year we come down here expecting a tough ballgame — and they were just coming off a big win against Oak Grove. We just hit the ball well tonight.”

Salisbury did not. Facing left-hander Jake Stroud — a last-minute replacement for scheduled starter Villaman — they failed to get a hit. Vance Honeycutt and Bo Rusher managed long flyouts to right field, two of the four balls Salisbury put in fair territory.

“We’ve got no choice,” Herndon said. “We’ve got to put this one away. We’ll have a better chance (tonight at Ledford) because we’ll have Jack (Fisher) on the mound, but they’ll go with Villaman. He was supposed to throw tonight, but if you’re up 10 runs in the top of the first, why use him?”

Villaman, a likely high draft choice in June’s amateur draft, threw eight warmup pitches before Salisbury batted in the last of the first. That’s when Adams conferred with the umpires and called an audible — summoning right-fielder Stroud to the mound and saving Villaman for another day.

“When we saw they weren’t pitching Fisher or Rusher, we had time to make a quick change,” Adams said. “It was really a spur-of-the-moment decision.”

And an obvious one. Villaman, a southpaw unbeaten in four starts, took the abrupt switch to right field in stride.

“I was ready to go,” he insisted. “But there was no point getting frustrated over something I couldn’t control. This game was really unique for me because of everything that happened in the first inning. I’m glad I was able to contribute with my bat.”

The switch sent a handful of disgruntled MLB scouts home without charting a pitch, but opened a door for Stroud. He walked three and struck out two in an abbreviated no-hitter.

“What do you want me to say?” Herndon questioned. “He was an average pitcher. How many did he strike out? We hit two balls to the wall. When you give up 10 in the first, the game is over. All the scouts came out here to watch (Villaman) and left (ticked) off.”

SHS pitching coach Carson Herndon said the Hornets’ game-plan backfired when Ledford erupted in the first inning — then altered the pitching matchup. “We had a plan,” he said. “It just didn’t work.”

Not much did. Sophomore Max Crawford started for Salisbury and faced nine batters. He retired one and allowed eight runs. Nick Peltz followed and yielded Villaman’s first homer, a two-run blast to right-center. “With two strikes I was just trying to put the ball in play,” Villaman said. “But he gave me a good pitch to hit and I hit it.”

Peltz allowed eight runs in 1 1/3 innings before Parker Lippard extinguished a second-inning blaze. Salisbury trotted David Holden, J.T. Taylor and Honeycutt to the mound in the third, when Ledford sent 14 batters to the plate and collected its last eight hits.

“I really don’t know what to say,” Herndon mustered afterward. “We weren’t very good. In fact, we were very bad. Now, we learn what we’re made of, coming back (today) and playing the same team.”