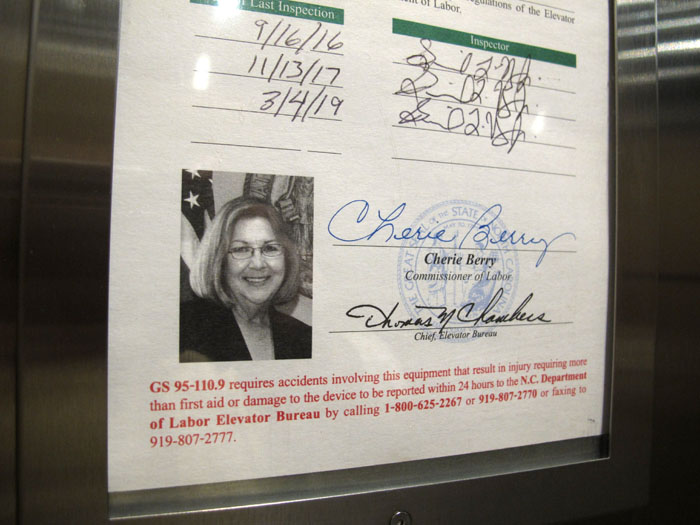 A photo of state Labor Commissioner Cherie Berry is displayed on an elevator inspection certificate in Raleigh on Tuesday. Berry, who was sworn in as North Carolina's first female labor commissioner in January 2001, announced Tuesday that she would not seek re-election when her term ends next year. Allen G. Breed/Associated Press

Republican Commissioner Cherie Berry said Tuesday that she will not seek re-election in 2020, 20 years after she first won the job.

Her colleagues on the Council of State — composed of Gov. Roy Cooper and other statewide elected leaders — gave her a standing ovation after her announcement at the council’s monthly meeting.

“It’s just time for somebody else to serve,” Berry said afterward. “I’ve always lived my life with I want to leave something when I feel the best about it, and I feel absolutely the best about the Department of Labor right now.”

Berry, 72 and in her fifth four-year term, brought wider recognition to her otherwise little-known post in the mid-2000s by putting her photo on inspection certificate placards inside what are now 28,000 elevators statewide. With it came the nickname “elevator lady” or “elevator queen.”

“It kind of took on a life of its own and became the kind of cult thing,” Berry said, adding that she believes her face helped young children not feel scared when they got on an elevator. “They think and believe that I will keep them safe, and I love the little kids and the way they look at it.”

Berry said she is most proud during her tenure of the downward trend of on-the-job injuries and illnesses. She attributes the reductions to working with companies to help them achieve safe and healthy workplaces, rather than simply punishing them for violations.

“That’s the way government and the private sector ought to work together,” she said. Berry, who is from Catawba County, was elected to the state House in 1992, where she served for eight years and was tasked with current GOP Rep. Julia Howard to overhaul the state’s welfare system.

She was elected labor commissioner in November 2000. Adding her photo to the certificates — previously they had only the commissioner’s signature — also was a shrewd political move. It provided her a connection to voters when they cast ballots every four years in her race.

It also got the attention of political scientists. A 2015 study from a graduate student at the University of North Carolina at Chapel Hill and a Michigan legislative researcher suggested the photo served as “non-campaign-specific advertising” that helped outperform other North Carolina Republican statewide candidates in 2012.

The Department of Labor also works to improve safety in private-sector businesses and government agencies, including testing the rides at the North Carolina State Fair and other events.

Berry said she announced her retirement now so that potential candidates from major parties can gear up for a campaign, which formally begins with candidate filings in December.

Jessica Holmes, the current chairwoman of the Wake County commissioners, announced earlier this year that she is seeking the Democratic nomination.

The current commissioner cited a song from Rita Coolidge that begins “I’d rather leave while I’m in love,” in explaining her decision to step down at the end of next year.

“It’s the best job that I’ve ever had,” she told council colleagues. “It is absolutely a privilege to serve.”

Papers of Billy Graham to be transferred to his…