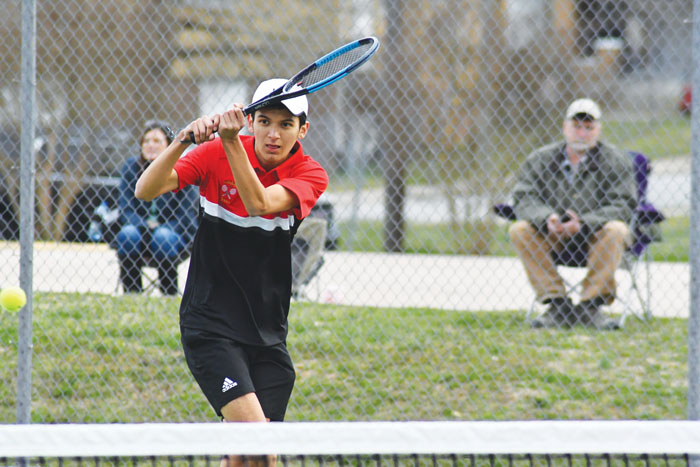 WALLBURG — Ledford has a strong boys tennis team, but Salisbury was up to the challenge on the road on Wednesday afternoon.

The Hornets beat the Panthers, 8-1, losing only a fiercely contested match at No. 1 doubles. The victory was the 15th straight for the Hornets this season. They have secured their 10th straight outright Central Carolina Conference championship.

“It’s that time of year when our guys have their game faces on,” Salisbury coach Milton Griffith said. “They knew what they had to do today, and they played hard and put it all together. Ledford is a good team, a very good team, and while 8-1 sounds easy, it wasn’t easy. It was tough. We didn’t sweep Ledford in singles the first time we played them, but today we did, and that was a goal.”

Over the last 10 seasons, Salisbury’s boys are 112-0 in the Central Carolina Conference. The names change and occasionally the coach changes, but the winning tradition continues. Griffith, who learned tennis as a player at North Rowan High and was a standout football offensive lineman at Livingstone College, has kept things rolling during his six seasons. A counselor during the work day, he is now closing in on 100 victories, with a remarkable overall record of 96-7.

“There’s no secret to our success, just a lot of hard work by our players in the off season as well as during the season,” Griffith said. “This is one of the deepest teams we’ve had.”

Salisbury was exceptional in 2018, racking up 21 straight wins before losing a 5-4 match to Brevard in the regional final. That was the deepest playoff run for the SHS program since 2010. Salisbury individuals have won a number of state titles in singles and doubles, but as far as dual team championships, the Hornets haven’t gone all the way since they were in 3A in 1993. This team has a chance to end that drought.

Salisbury graduated only Adam Drye from last season’s top six, and Griffith received a surprise addition in Brazilian exchange student Leo Schiavinato, who has settled in as the No. 4 seed and has yet to lose a singles match.

“I went into the season thinking that we’d have a lot of competition for our No. 6 spot, but Leo was a very pleasant surprise,” Griffith said. “He’s got an amazing, bending serve that is very hard to return. All the other starters played last year and have another year of experience. So we’ve been pretty good.”

Ledford and West Davidson are the next best teams in the CCC. Salisbury has battled for two 7-2 and two 8-1 wins in the matches with the Panthers and Green Dragons. The rest of the Hornets’ matches have been 9-0.  Salisbury’s toughest competition to date came in a preseason scrimmage against 3A Concord.

Roarke Burton, co-county player of the year last season, is undefeated at No. 1 singles. Also unbeaten are No. 4 Schiavinato, No. 5 Jander Rodas-Palacios and No. 6 Juan Salazar. Sean Archer dropped one match at No. 2 singles, but is unbeaten when he plays No. 3. The Hornets also boast undefeated No. 2 and No. 3 doubles teams. They usually employ Burton with Rodas-Palacios at No. 2 doubles, with Archer teaming with Salazar at No. 3 doubles.

Ethan McGee usually plays No. 2 singles for the Hornets and he avenged one of his few losses this year by beating Ledford’s Brenner White 6-2, 6-2 on Wednesday.

Burton had a tough assignment but defeated Chris Hartzell 6-0, 6-2.

“Hartzell is a great player, but Roarke was really focused today and played one of his best matches,” Griffith said.

Archer had the most challenging singles match on Wednesday at No. 3. He lost the first set, but won the second set. Then he won the third-set tiebreaker.

Salisbury has three CCC matches left to finish the regular season, all of which should be routine victories, and obviously the Hornets will play quite a few playoff games at home.

Brevard and Shelby, perennial tennis powers in the West, are having strong seasons, but the 2A team that is drawing the most attention is N.C. Science & Math, which already has beaten defending state champ Carrboro twice.

Griffith keeps an eye on everything that his happening statewide because the Hornets have a chance to be there at the end.