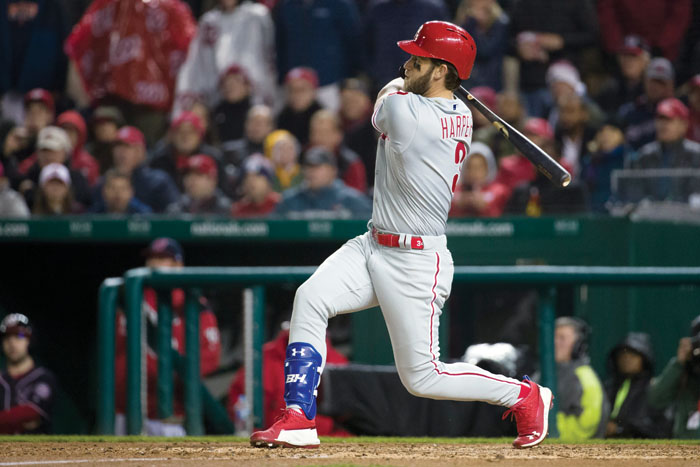 WASHINGTON (AP) — Bryce Harper crushed a long home run for his third hit while performing to jeers in his return to Washington, and the Philadelphia Phillies beat the Nationals 8-2 Tuesday night for the franchise’s best start in over a century.

Maikel Franco also homered for the Phillies, baseball’s only undefeated team at 4-0. They had only done that in 1915 and 1897.

Harper left Washington after playing 927 games over seven years, participating in six All-Star Games and winning the 2015 NL MVP Award. He listened to what the Nationals had to offer, then signed a $330 million, 13-year contract with the rival Phillies in February.

Harper hasn’t wasted any time providing returns for the investment. He has three homers and five RBIs in four games, along with a .429 batting average. He drove in three Tuesday.

Booed during every at-bat, Harper thumped a “take that,” 458-foot shot in the eighth inning off Jeremy Hellickson. As the ball soared toward the second deck in right field, Harper flipped his bat and circled the bases with delight before celebrating with his new teammates in the visiting dugout.

When the Philadelphia’s starting lineup was announced during the late stages of a 41-minute rain delay, it became apparent that Harper would not be welcomed back warmly. Many in the slow-arriving crowd of 35,920 booed loudly when his name was announced as the No. 3 hitter, and the derisive shouting continued during a video montage of his biggest moments with the Nationals.

“That’s sports,” Harper said about the reception. “That’s part of the game.”

The chorus resumed when Harper walked to the plate in the first inning to face three-time Cy Young Award winner Max Scherzer. The fans finally cheered when Harper took a strike on the outside corner, and they got even louder when Harper whiffed on a 2-2 changeup.

“Hearing the boos in the first at-bat just reminded me that I have 45,000 people back in Philadelphia screaming for me,” Harper said.

When he took his position in right field, Harper stood in front of seven fans wearing white shirts that spelled out T-R-A-I-T-O-R.

After striking out twice, Harper doubled to right in the fifth and singled in a run in the sixth to make it 6-0 before connecting in the eighth.

When the game ended, hundreds of Phillies fans remained, chanting “MVP! MVP!” as Philadelphia shook hands. The shouting fans included many who had been bused in from Philly earlier in the day and seated behind Harper in right field.

Jean Segura had three hits and three RBIs for the Phillies, who were coming off a season-opening sweep of Atlanta.

Zach Eflin (1-0) struck out nine and allowed three hits over five scoreless innings. He outdid Scherzer (0-2), who allowed one earned run in five innings and struck out nine.

Scherzer has started half the Nationals’ four games this season. He has a 2.13 ERA and 21 strikeouts in 12 2/3 innings, but Washington has yet to score a run for him.

Very little went right for the Nationals, who fell to 1-3.

Shortstop Trea Turner left in the first inning after being struck by a pitch on his right index finger while trying to bunt. Turner squared at the plate and couldn’t back away from a fastball that struck his hand, which was wrapped around the bat.

In addition, first baseman Matt Adams left in the fourth inning with back spasms, likely the result of a scary fall early in the game while chasing a foul ball. Drifting behind first base toward the stands, Adams flipped over a fence as he reached into the photo well and landed on his back.

Anthony Rendon hit a two-run homer in the sixth.

Philadelphia cleanup hitter Rhys Hoskins went 0 for 3 with two strikeouts against Scherzer and is 0 for 14 with nine Ks lifetime against the right-hander.

Speaking before the game, Harper had no doubt that this was going to be an unusual experience.

“Seeing Max on the mound tonight, Trea at short, Rendon at third and me not standing behind them, it’s definitely going to be weird,” Harper said. “But I’m looking forward to running out there and doing my job for the Philadelphia Phillies. I’m excited for that next chapter.”

Phillies: LHP Tommy Hunter, on the 10-day injured list with a strained right forearm, was getting “a series of tests” in Philadelphia on Tuesday, manager Gabe Kapler said. “He still felt some soreness,” Kapler said, “so we want to make sure that we don’t miss anything.”

Nationals: OF/INF Howie Kendrick (hamstring strain) was in the clubhouse Tuesday and appears close to being activated from the injured list. “He’s going to work out with us a couple days and we’ll see where he’s at,” manager Dave Martinez said, adding that a rehabilitative stint might not be necessary. … OF Michael A. Taylor (knee/hip) will start a rehab assignment Friday with Double-A Harrisburg.

Phillies: Aaron Nola (1-0, 1.50 ERA) starts in the finale of the two-game series on Wednesday afternoon. The right-hander beat Atlanta in the opener after going 17-6 last year.