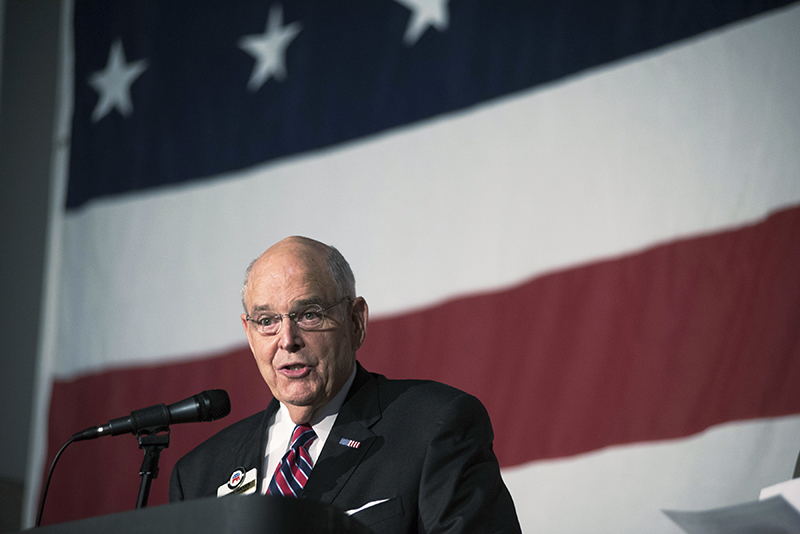 RALEIGH — The chairman of the state Republican Party, an insurance magnate and two of his associates are facing federal charges for a plan to shower the state’s top insurance regulator with campaign contributions to ensure special business treatment, a criminal indictment unsealed Tuesday said.

State GOP Chairman Robin Hayes and insurance and investment firm founder Greg Lindberg were among those charged with bribery, conspiracy and other crimes.

The four defendants appeared Tuesday before a federal magistrate.

Hayes also was charged with lying to the FBI. The 73-year-old former congressman announced Monday that he would not seek re-election as party chairman, citing health problems. Hayes represented North Carolina’s 8th Congressional District from 1999 to 2009. That district now includes a large portion of Rowan County.

Hayes “steadfastly denies the allegations made against him” and is eager to clear his name, his attorney, Kearns Davis, said in a statement.

Lindberg — largely unknown politically until his contributions started flowing heavily in 2017 — has given more than $5 million to North Carolina candidates, party committees and independent expenditure groups.

Federal prosecutors allege that between April 2017 and August, Lindberg sought to shower Republican state Insurance Commissioner Mike Causey with contributions through the state GOP and an independent committee in exchange for actions helping Lindberg’s businesses. Lindberg sought, among other things, the removal of a Causey deputy responsible for examining Lindberg’s Durham-based Global Bankers Insurance Group.

The unidentified deputy commissioner was “deliberately and intentionally and maliciously hurting my reputation with other regulators,” the indictment quoted Lindberg as saying to Causey.

Lindberg’s team urged Causey to hire Palermo to replace the deputy commissioner or become her boss, prosecutors said. Causey eventually refused, fearing Palermo’s ties to Lindberg’s company would be discovered by journalists, the indictment said. Lindberg then proposed “we recruit someone brand new to the department with the same skill set,” the indictment said.

Palermo created an independent expenditure committee with limited public disclosure and the ability to spend unlimited amounts on political campaigns that was funded with $1.5 million of Lindberg’s money, prosecutors said. In all, Lindberg and his associates promised Causey $2 million in donations.

Lindberg asked Hayes to direct $250,000 to Causey’s re-election campaign. Hayes initially protested, saying transferring so much money would attract attention, but he went along, prosecutors said.

“Whatever you all want to do, we’ll do,” Hayes said, according to the indictment. “All right, I’ll get ‘er done.”

In October, as the investigation was building steam, Causey turned over $250,000 in donations from the state GOP to U.S. marshals. The commissioner also returned $5,000 that Lindberg had donated directly to Causey’s campaign.

Causey — first elected to a four-year term in 2016 — was not charged in the indictment. Prosecutors said in a news release that he voluntarily reported the scheme.

“Everything I did was in cooperation and with direction of the federal investigators,” Causey said in a phone interview.

Causey said he was sorry to hear about the indictments, “but everybody makes their own decisions.”

The case also threatens to embroil an unidentified official whom prosecutors described as speaking to Causey several times on Lindberg’s behalf. Lindberg made a $150,000 contribution to a political committee backing “Public Official A” on the same February 2018 date he learned the politician was willing to help sway Causey, prosecutors said.

Federal Election Commission records show Lindberg made a contribution in that amount to Republican U.S. Rep. Mark Walker’s Mark Walker Victory Committee around the same time. It’s the only $150,000 contribution by Lindberg listed in 2018 on the FEC website.

Walker’s spokesman, Jack Minor, said he couldn’t confirm if Walker is “Public Official A,” adding that the February 2018 contribution eventually went to the Republican National Committee and wasn’t used for Walker’s campaign.

“Walker is not and never has been a target of this investigation and has committed no wrongdoing,” Minor said in a statement, adding that Walker has assisted federal investigators.

The state GOP cooperated with the investigation, including turning over requested documents, attorney Josh Howard said in a statement.

“Greg Lindberg is innocent of the charges in the indictment, and we look forward to demonstrating this when we get our day in court,” said his attorney, Anne Tompkins, in a statement.

A spokesman for Global Bankers and Eli Global noted the companies were not charged. Global Bankers has cooperated with federal prosecutors and will continue doing so, spokesman Steven Goldberg said.