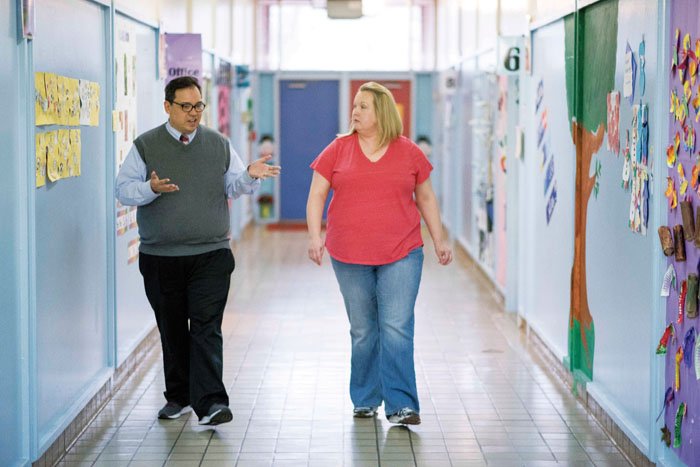 His motto is “I want to put the community and action back into the Community Action Agency.”

Rocky Cabagnot, the executive director of Salisbury-Rowan Community Action Agency, came home to Salisbury to rediscover a mission that predates the Economic Opportunity Act of 1965.

He thinks back to the people who made Salisbury and Rowan come up out of struggles: Lash, Alexander, Isenberg, Overton.

“It was cross-racial,” Cabagnot says, and had a focus on poverty and the need to get something done about it.

Cabagnot hopes to work “in the spirit of the community coming together to focus on real problems.”

The agency he leads has become a huge service provider. Its biggest part is overseeing Head Start in five counties, Rowan, Davidson, Stanly, Moore and Montgomery.

Coming to lead SRCAA has been his biggest challenge, “but really, the most enjoyable” even more than his lost dream of teaching law school.

“Every day is new and there’s always something to learn,” Cabagnot said. “We are really looking hard at getting people access to early childhood education and affordable, quality child care.”

He wants to be a leader in economic and community development and help people to become a lure to new companies or for companies to expand.

The agency could focus on any job that needs certification, from truck driving to certified nursing assistant.

“If you look at community action,” Cabagnot says, “it’s always been, historically, an incubator for innovation and social programming.”

SRCAA is one of 34 such agencies serving all 100 counties in the state.

Those agencies were inspired by people like Fred Rogers, who encouraged a closer look at early childhood education. Legal services started in community action.

Cabagnot wants to focus on early childhood and what is now identified as ACEs, adverse childhood experiences that can have an impact on the child’s future. “We want to innovate how we can explore trauma with children under 5.”

That may not happen within the context of a Head Start class, but what does happen there is giving children a boost, and he praises Greg Alcon’s Apseed readers, giving children access to a screen to get them reading.

Cabagnot wants to get back to the roots of the founders of the original agency, to the town elders who saw a problem and tried to fix it. Some issues don’t go away, like poverty, but Cabagnot wants to approach the problem from a different angle. He wants to help the working poor do better, to make sure children are screened for hearing problems or learning disabilities, to make sure children get nutritious food.

“I’m hoping we can continue that tradition of being an incubator for progressive social innovation; we’re looking at local food and trying to work that in. … We’re going to talk about the history of food and agriculture here and how we can produce a public health issue and economic development.”

Cabagnot moved to Rowan County at age 5, when his mother took at job at the Salisbury VA Medical Center.

He went to elementary school at Sacred Heart Catholic School, middle school at Knox and graduated from Salisbury High.

His first job out of law school was with Americorps as a housing attorney.

“That was a life-changing experience. I became very concerned about low-income, working class people,” he said.

He got an equal justice work fellowship in public interest law in Washington, D.C., and did rural community lawyering. He was a “legal aid cowboy” in North Florida, he defended people losing their homes around the 2008 financial crisis, but after a while, he “grew weary of litigating housing and foreclosure. I was more interested in building affordable housing, so I turned to community and economic development.”

As his time in Florida was ending, his parents here in Salisbury were getting older, and he thought it was time to come back. He met a man from the Charlotte School of Law, and got a job there teaching community and economic development.

“Teaching was my dream job,” he said. “I developed a clinical legal program, supervising law students working with clients through my license.”

For five years, he worked for nonprofit groups, mostly in the Charlotte area. He was commuting from Salisbury. Then, he met his wife, who had a son, and Cabagnot convinced her and son Daniel to come to Salisbury.

“Coming back was a real blessing,” he said.

But Charlotte School of Law was folding, and he was losing his dream to be a “gray-haired, tweed-coated professor.”

Then, he found a job listing for the Salisbury-Rowan Community Action Agency.

Attorney and Salisbury City Councilman David Post became his mentor, and Post’s private practice, the Center for Access to Justice, was seeing a spike in interest. So Cabagnot ending up helping out.

It just so happened Post was on the board of directors for SRCAA. The pair talked about Cabagnot’s interest in community action but not in a direct leadership position.

“I had never been the CEO,” Cabagnot said.

Still, Post encouraged him to apply and, after a set of what Cabagnot called “grueling interviews,” he got the job.

“I was blessed to come in and have a very strong team members and … good program directors,” he said.

Cabagnot said he had a lot of fires to put out at first, but he and the team are turning things around.

“I’m a born again Salisburian or Rowan Countian. I feel really blessed to be back home and bring back skill and knowledge that can help others,” Cabagnot said. “I will always be a cheerleader for equitable community development in Salisbury and Rowan County, either in my job or as a citizen lawyer.”

He’s happy to be hanging out with his parents and raising his family with wife Leslie, who he said is his best friend, soulmate and conscience.

“I have to give a shout out to community action work,” Cabagnot said. “My being here has changed the dynamic, but I have a great team around me of talented individuals and a great board.”