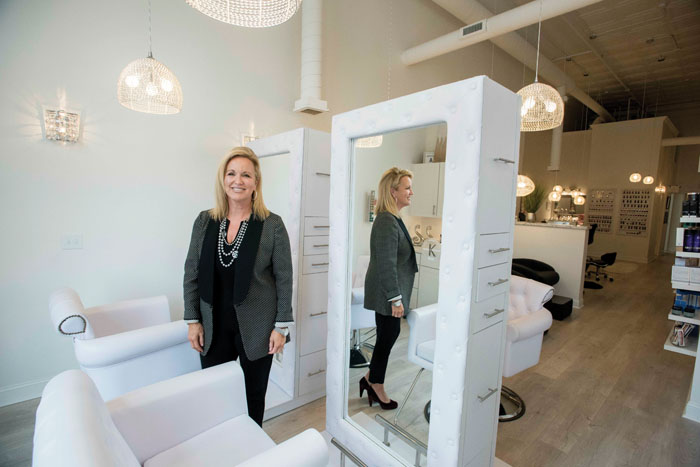 Named the Rowan County Chamber of Commerce’s small business of the year, Igo’s Greystone Salon & Spa opened a second location in downtown Salisbury. The first location is on Klumac Road.

But her successes haven’t come without some struggle.

Igo, who is originally is from Chattanooga, Tennessee, grew up in Kannapolis. She became a mom at 19 years old and dropped out of the American Business & Fashion Institute in Charlotte. By 26, she was a single mother with two kids.

Her desire to give back comes from her history. She once was in need, and the community came to her aid. Igo remembers a woman leaving groceries on her porch when she was a struggling single mother.

Now, Igo says she has the ability to make someone else feel better, especially those who are in need like single parents or someone diagnosed with terminal cancer. She has provided haircuts to foster kids before a new school year and helps with Novant Health’s breast cancer awareness programs. She gives spa packages to Rowan County’s teacher of the year.

“Experiencing that love and somebody giving to me in my time of need made me see how important it was,” she said. “It was almost like paying it forward — like when someone does something for me, let me do it for somebody else. I have a love for people that runs deep, and I feel like it’s part of God’s plan.”

When she sees others going through struggles similar to those she experienced, she understands and lifts them up in the way that she was.

“I’ve walked through seasons of life that were winters,” Igo said. “That were cold, dark and lonely. When I see people going through that, my heart goes out to them and I’m like, ‘I’ve been there.’ Sometimes I wonder if I’ve walked that path so that I can look in somebody and be very transparent and authentic and say, ‘I know what you’re going through. I’ve hurt like that before.’”

After working for years as a makeup artist and a restaurant manager and at various spas in Concord, Igo, at 45, opened the first Greystone Salon. She wants people to know that despite adversities, they can reach their goals at any age.

“Life is not always a mountaintop. Sometimes you have valley experiences,” Igo said. “Through those valleys, I’ve always been told that’s where the flowers are beautiful and grow. That’s where you’re going to grow.”

Every year, Igo gives her staff a word. This year it’s inspire. For Igo and her staff, “inspire” is to breathe life into people.

Igo says she knows the importance of having inspiration. As a business owner, it’s important to find a mentor who is wiser, older and more successful, she said. She looks up to her parents. Her late mother  was a hard worker with a love for fashion and spas, and her father was an entrepreneur. Her two children, Bryn and Brittany, inspire her to be a better person, she said.

“You, as a small business owner, it’s almost like a bucket you’re pouring all the time, and someone needs to pour into you,” Igo said.